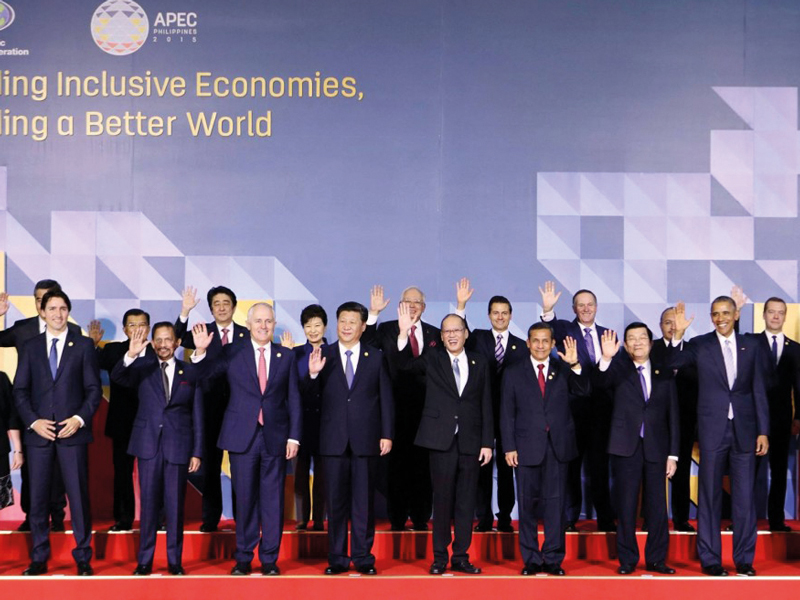 Despite diplomatic missteps, APEC 2015 could pave way to regional peace and development. The triangular perspectives of Washington, Beijing and Manila tell the story.

In Washington’s view, President Obama’s presence in the Asia Pacific Cooperation (APEC) Summit was vital to underscore America’s sustained commitment to the region. With its recovery, the US has some wind in its sails. It also enjoys the success of the Trans-Pacific Partnership (TPP) agreement, although the devil is in the details.

While all 12 participating countries are likely to ratify the agreement in the first half of 2016, the most significant risk involves passage through the US Congress amid election year. Moreover, the TPP excludes the economic engines of the 21st century: China, India and Indonesia.

Although the Philippine’s President Benigno S. Aquino III had assured China’s foreign minister Wang Yi that the contested maritime issues would not be raised at the summit, Obama did just that by urging China to halt its construction on reclaimed islands in the South China Sea. Standing in front of the BRP Gregorio del Pilar, a former US Coast Guard ship that is now the flagship of the Philippine Navy, Obama pledged $250 million in military contributions to several Asian nations. However, these nations may not be willing to use military capacity to the White House’s preferred purpose – against China.

Obama spoke in the name of “freedom of navigation”, which sounds increasingly like a metaphor for containment in Beijing. Moreover, not all Filipinos feel entirely comfortable with their current policy stance.

In APEC, Obama sought to highlight the US’s willingness to respect international norms and principles as a foundation to the region’s development. The Aquino administration has sought to use the UN Convention of the Law of the Sea (UNCLOS) to make its case against Beijing in an effort to “internationalize, legalize and balance China”.

Ironically, the US recognizes the UNCLOS as a codification of customary international law, but has not ratified the law, which Washington’s conservative opposition sees as detrimental to US national interests – but which the US insists China should abide by.

Prior to the Summit, President Aquino promised to be the “perfect host” to all leaders attending the regional summit. However, President Xi Jinping was left alone to walk the long and lonely red carpet, which created an impression of a purposeful staging.

Nevertheless, Xi confirmed substantial support among APEC nations for China’s vital regional initiatives, including the Asian Infrastructure Investment Bank, the New (BRICS) Development Bank, the Silk Road fund, and the One Belt, One Road initiative. In the coming years, these massive projects have potential to accelerate industrialization and urbanization from Asia to the Middle East.

In Asia, there is a rising awareness that these initiatives are critical to the region as the advanced economies will be mired in stagnation for years to come; in other words, Asia’s traditional export-led growth is no longer a viable option.

In Asia, there is a rising awareness that China’s regional initiatives are critical to the region as the advanced economies will be mired in stagnation for years to come; in other words, Asia’s traditional export-led growth is no longer a viable option.

President Xi also promoted talks of alternative regional trade agreements. For all practical purposes, the TPP has left Asia with good, bad and ugly scenarios. In the bad “dead on arrival” scenario, the US Congress torpedoes the deal in the short term. In the ugly “Iron Curtain” scenario, the TPP contributes to the militarization of the Asia-Pacific, while economic benefits decrease. Unsurprisingly, Asia is open to one or more reasonable free trade alternatives.

In the “inclusive free trade” scenario, China and the US conclude their bilateral investment treaty (BIT), while growth accelerates and economic relations deepen across South, East and Southeast Asia. It is this scenario for which China is advocating. It would have room for both China and the US, and 21st Century currency arrangements in Asia Pacific.

In this view, the TPP is only one and ultimately a transitional foundation of truly free trade in the region. The latter requires the broader and more inclusive Free Trade Agreement for Asia Pacific (FTAAP), whose acceleration Xi supported in Manila, along with the Regional Comprehensive Economic Partnership (RCEP), which is the preferred alternative of emerging and developing nations in the short-term.

In the Philippines, the APEC Summit was the climax of a year-long hosting of APEC meetings in Manila. The first time the country played host was in 1996, when Fidel Ramos was still president and the economy thrived. After Ramos, Asia’s 1997 financial crisis and two lost presidencies (Joseph Estrada, Gloria Macapagal-Arroyo), the Philippine economy tanked while the rest of Asia boomed.

After Aquino won the 2010 election on anti-corruption platform, he initiated institutional rejuvenation, which resulted in faster growth but has failed to create enough jobs and lift millions from poverty. After four fast years of rapid expansion, growth remains at around 6.3 percent — a remarkable performance, but behind the country’s true potential.

In addition to unfavorable weather patterns and natural disasters in the storm-prone nation, downside risks include not just China’s growth deceleration but bilateral friction which hurts exports and keeps Chinese capital in distance.

Behind the facade, the Philippines is simmering, as evidenced by several incidents during the summit. While controversial detentions and relocations were deployed to clean Metro Manila’s streets from the homeless and the poor, some demonstrations escalated against “US imperialism” and the enhanced Philippines-US visiting forces agreements (VFA-EDCA). Still others opposed China’s South China Sea policies. Indigenous refugees from the conflict-plagued island of Mindanao protested the Army’s alleged human rights abuse.

As the 2016 presidential campaigns are in full swing in the Philippines, a handful of candidates – including Vice President Jejomar Binay, independent Senator Grace Poe and Aquino’s own pick Manuel Roxas II – have emerged as major contenders, but amid allegations of foul play. This time the Philippines’ economic cooperation and maritime dispute with China may also play a role in the election polls.

Aquino’s critics, whom include both business interests and left-wing opposition, argue that, unlike its regional neighbors, the Aquino administration has not managed to deepen economic cooperation and high-level bilateral diplomatic relations with China, while pursuing claims on the South China Sea.
Vice-President Binay has pledged he would take a “more moderate” position on China. He wants a joint venture between Manila and Beijing to develop resources in the region and improved trade relations. Another contender, the tough-talking veteran Senator Miriam Santiago would like to terminate the US-Philippines visiting forces agreement as unconstitutional.

The need for a more nuanced China stance is now widely recognized not just in Manila but across Southeast Asia.

However, US presidential elections in 2016 will reshape regional geopolitics. The Democratic and Republican views of China, Asia and South China Sea are not identical.

Unlike its regional neighbors, the Aquino administration has not managed to deepen economic cooperation and high-level bilateral diplomatic relations with China, while pursuing claims on the South China Sea.

China’s international role is also about to accelerate dramatically as it will take over as the host of the G20 nations, and the IMF staff has already supported the Renminbi’s inclusion as the fifth international reserve currency.

While the APEC ended with a vow to combat terrorism, the Summit refused to be distracted from its true goal – economic development.

In the coming years, all critical players in the Asia Pacific – the United States, China and the Association of Southeast Nations – must compromise if they truly want to invest in peaceful cooperation and economic development in the region.

Due to the extraordinary high economic and strategic stakes in the region, these policies now have global repercussions. Consequently, failure is no longer an option.

The original commentary was published by China-US Focus on November 24, 2015.


Go to top
About the Author

Dr. Dan Steinbock
is the research director of international business at the India, China and America Institute (USA) a visiting fellow at the Shanghai Institutes for International Studies (China) and at EU Center (Singapore). For more, see http://www.differencegroup.net