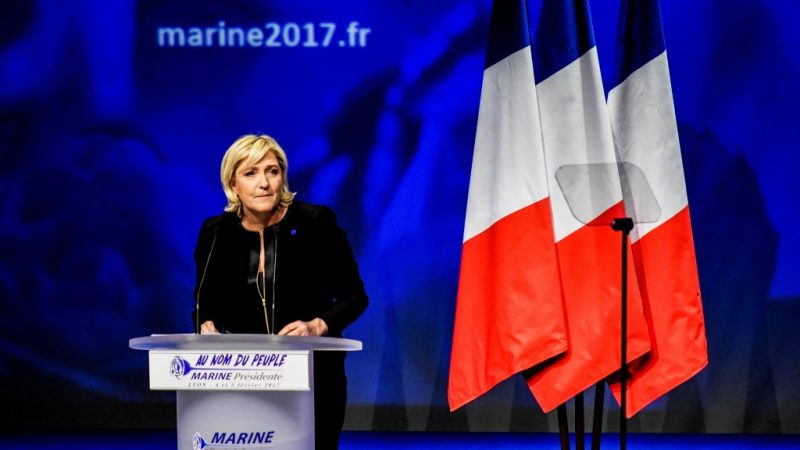 In France, President Hollande’s utter failure to foster broad consensus for structural reforms has paved the way for a contested election. While public debate focuses on Emmanuel Macron as the saviour of France, the real story is that Marine Le Pen’s agenda has shifted the French political landscape.

Before TV debates, the French presidential election featured 3-4 viable candidates, which together accounted for 85-90 percent of the total vote. Until recently, the leader of the Front National, Marine Le Pen, and the centrist Emmanuel Macron, have garnered about 25 percent in the polls, followed by the centre-right François Fillon (20%), and the socialist Benoît Hamon (15%).

After merciless campaigns, scandals and mud-slinging, Macron has a very slight lead among first-round voters (27%), ahead of Marine Le Pen (26%) and Fillon (17%), while socialist Hamon has lost ground for far-left Jean-Luc Melenchon (12% each). French voters go the polls on April 23 and May 7 in the two-round election. Since no candidate can garner absolute majority in the first round, it is the second round that really matters. And in that race, Macron (64%) seems to have an overwhelming lead against Le Pen (36%).

Even if Le Pen would win the first round, she would face great odds in the second. Yet, in one sense, she has already won. In France, the political future belongs to her agenda (see Box: ÉLYSÉE PALACE’S NEW AGENDA ).

Emmanuel Macron’s (40) current tie with or slight lead against Le Pen in polls is not based on his perceived success. His stint in Hollande’s government as a business-friendly economy minister alienated most socialists while failing to win over most conservatives, not to speak of the French majority. However, as Fillon has been swept by an embezzlement debacle and socialists have failed to put up a fight, Macron is pretty much all that’s left from the old French centre-right elite.

Politically, Macron is a proponent of a “third way”. To him, political right and political left have less importance in the contemporary world. What matters is economic pragmatism. Like his heroes, Tony Blair in the UK and Bill and Hillary Clinton in the US, Macron advocates whatever is expedient, from Rotschild’s neoliberal profits to Hollande’s bureaucratic socialism. Over time, he may share the ultimate fate of Blair and the Clintons: initial excitement followed by disillusion and resentment.

In reality, Macron is a typical product of the elitist École nationale d’administration (ENA). After a stint as an investment banker at Rotschild & Cie Banque, he served in Hollande’s socialist governments, where he advocated business-friendly reforms that undermined Hollande’s support among the government’s socialist constituencies, while fostering Macron’s clout among the socialist opposition and big business.

Married with his 24 year older high school teacher he first met at 15, Macron’s personal life and policy stances remain equally ambiguous. Last November, he declared that he would launch a social liberal bid under the banner of his new movement En Marche!. By design, the name of the party shares Macron’s initials. He likes to portray it as a “social liberal party” to attract the centre-right movement, and a “progressive movement” to court Le Pen’s supporters and socialist dissidents.

In reality, En Marche! is a one-man façade. It is registered at the address of Laurent Bigorgne, director of Institut Montaigne director. It was launched with people representing corporate giants, such as the commercial real estate titan Unibail-Rodamco, the international banking behemoth BNP Paribas, and the aerospace mammoth Safran. The Paris-based Institut Montaigne promotes competitiveness and social cohesion. It was founded by millionaire Claude Bébéar, former CEO of AXA, the French multinational insurance, investment and financial colossus, which is funded by the likes of Allianz, Bank of America Merrill Lynch, BNP Paribas, Capgemini, IBM France, McKinsey & Company, Microsoft France, and, of course, Macron’s former employer, Rothschild & Cie Banque.

Macron needed a new platform because he had alienated socialists while failing to gain enough support among conservatives. He is the ultimate Europhile and federalist. He supports integration and structural reforms. In controversies about immigration, secularism, security and terrorism, Macron has favoured a balancing act – one that is well-aligned with the ideological position of Institut Montaigne.

His real political success has been the ability to pick up endorsements from both center-right and – left, including from François Bayrou of the Democratic Movement, EU parliament member Daniel Cohn-Bendit, the leftist ecologist candidate François de Rugy, and Socialist parliament member Richard Ferrand.

Dr. Dan Steinbock is an internationally recognised expert of the nascent multipolar world. In 2010, he predicted that Brussels opted for misguided policies to overcome the European sovereign debt crisis, which would prolong rather than resolve the challenges. In spring 2016, he forecast the UK Brexit and the outcome of the Italian referendum.

Dr. Steinbock is the founder of DifferenceGroup. He has served as Research Director of International Business at India China and America Institute (USA) and Visiting Fellow at Shanghai Institutes for International Studies (China) and the EU Center (Singapore). For more, see www.differencegroup.net