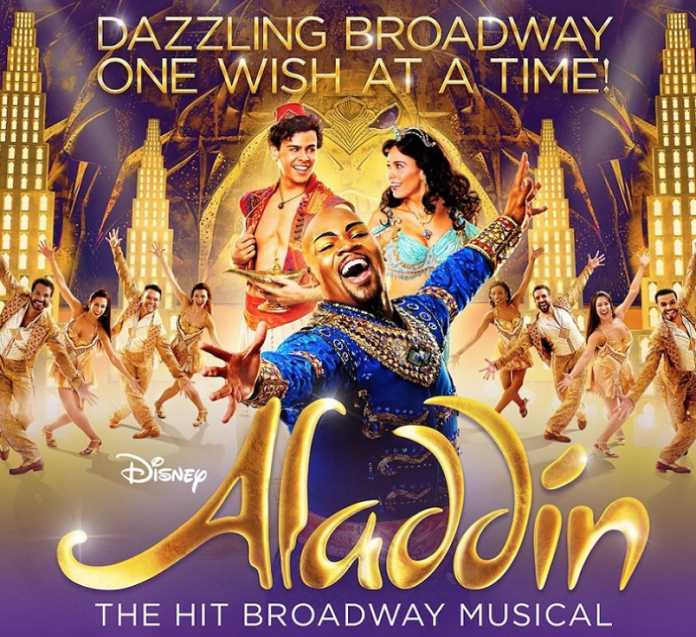 Aladdin is a famous stage musical. This is majorly based on the 1992 film of the same name. This musical premiered for the first time in Seattle’s 5th Avenue Theatre in the year 2011. The year 2014 was the Broadway debut year of the show as it reached the theatres of New Amsterdam. Aladdin the Musical also won the Tony Award for James Monroe, who played Genie in the front.

A little background on Aladdin the Musical

The story of this musical revolves around a local street-rat residing in one of the streets in the Middle Eastern part of the kingdom of Agrabah. He gets his hands on a lamp which is no ordinary lamp but a magical one. The magic lamp contains a Genie who can grant the boy three wishes. Aladdin- the street boy, uses the magical powers of the Genie to become a prince and win over the heart of the beautiful Princess Jasmine. A slight twist follows the plot where the Royal Vizier called Jafar plans to steal the magical lamp and role the kingdom.

For those of you who love the world of Disney, you must get your hands on some discount Aladdin tickets NYC to see this magical show. This musical is a fusion of the story of friendship and love, mixed with the colorful culture of the Arab world. If you are looking for a night out with the family in the Big Apple, you must not miss this amazing production. In addition to its beautiful scenery, it also features first-class music and first-rate visual effects.

Production of Aladdin the Musical

Although a stage version of the show Aladdin the Musical is already on display at the Disney California Adventure and ultimately on the Disney Fantasy cruise ship, a full-fledged complete length version of the Musical was under development too. Alan Menken, who is a famous producer, confirmed that a musical on the same show is in working in the year 2010. The full-length musical Aladdin premiered for the first time at the 5th Avenue Theatre in festivals city Seattle in 2011. This was the project of Disney Theatrical Productions.

Songs in Aladdin the Musical

Aladdin the Musical is not only known for its fantastic storyline and plot like Thoughts of a Colored Man broadway, but the songs it features have a broad fan base too. Most of the songs featured in the musical are by Alan Menken and Howard Ashman, and they are the same songs present in the movie, too, along with a few by Time Rice and Chad Beguelin. In addition, some of the songs featured in the film were the deleted songs from the 1992 film that were specially restored for the musical.

Characters in Aladdin the Musical

What are some critical plot points of Aladdin the Musical?

As mentioned earlier, Aladdin the Musical was different from the film of the same name. Although a few characters and songs were the same, there were numerous differences in the plot. Some of the essential and essential plot points of the musical are as follows:

Aladdin’s second wish, unlike the one in the film, i.e., saving himself from drowning, was to save him and his three human friends from imprisonment.

There were some other changes in the plot, too like in Chicago friends the musical parody, making Aladdin’s musical much more exciting and fun to watch.

Aladdin the Musical is one of the most popular musicals and has gained enormous success worldwide. This Musical is a considerable success like Charlie Wilson tour in numerous countries, including Germany, Japan, Australia, New Zealand, Singapore, the US, Netherlands, Mexico, etc. This is a two-act musical and is a no-miss for all the fiction fans out there.