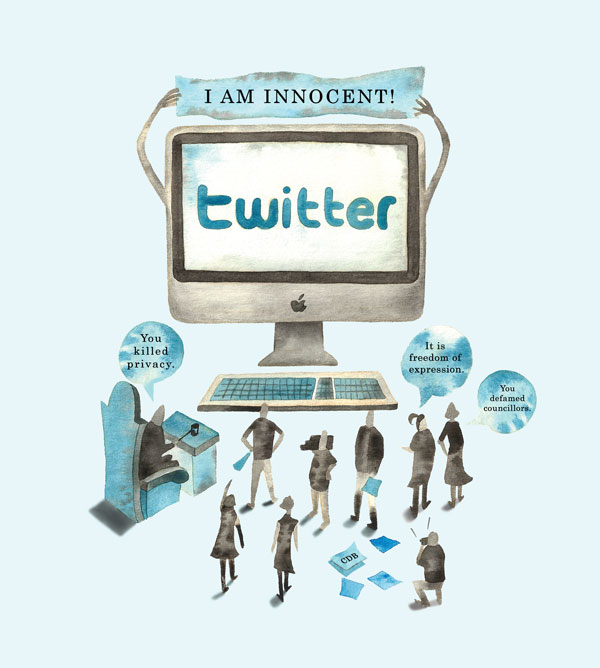 In June 2011, Eric Schmidt used his keynote speech at the Google Big Tent UK to criticise those governments who pass ‘foolish’ laws designed to protect privacy in online spaces.1 The former Google CEO did not refer directly to the UK in his speech, but the implicit message to fellow keynote speaker Jeremy Hunt, Secretary of State for Culture, Olympics, Media and Sport, was clear: government measures to protect privacy are unlikely to succeed in the social media age.

So has the Internet, and micro-blogging site Twitter in particular, killed privacy? Well, not quite, though it clearly helps if you have lots of money and access to legal expertise. This may seem counter-intuitive given the spate of super-injunctions last year that ultimately failed to prevent revelations about the private lives of footballer Ryan Giggs and former RBS Chief Executive Fred Goodwin entering the public domain courtesy of Twitter and the use of parliamentary privilege by two MPs. However, there are two landmark legal cases that I think may prove significant as the UK parliament considers the balance between the right to privacy and freedom of expression on sites such as Twitter.

First, South Tyneside council used Californian law to force Twitter to hand over user details relating to a blogger (“Mr. Monkey”) who had used the site to post libellous remarks about several of its members.2 The council lodged a subpoena in San Mateo County requesting access to the name, address and registration information of “Mr. Monkey,” who was linked to five Twitter accounts used to defame several councillors. While the council has yet to take further legal action against the user alleged to be “Mr. Monkey,” the case suggests that those who use Twitter to break super-injunctions or for the defamation of individuals can no longer assume they are immune from prosecution for such transgressions.

The cost of South Tyneside’s subpoena would appear to suggest that the right to privacy and the ability to respond to defamatory remarks might come at a very high cost on sites such as Twitter compared to traditional media outlets.

The cost of South Tyneside’s subpoena has not yet been disclosed but is said to be in the region of several hundred thousand pounds. This would appear to suggest that the right to privacy and the ability to respond to defamatory remarks might come at a very high cost on sites such as Twitter compared to traditional media outlets.

However, the second significant legal case involving the use of Twitter suggests this may not hold true in all cases. Ian Puddick, a plumber from North London, was cleared of using Twitter to harass millionaire city broker Tim Haynes after finding out about his affair with his wife. During the trial, Haynes claimed that the publication of sexually explicit emails detailing the affair had caused significant personal distress not only to him but also to his family, friends and colleagues. Mr Puddick argued that he had a right to expose Haynes’s behaviour and his misuse of company expenses during the affair. After District Judge Elizabeth Roscoe dismissed the claims of harassment, Mr Puddick claimed: “it is a victory for free speech”.3 On this occasion, the right to freedom of expression was clearly considered inviolable despite claims that it had implications for the privacy of another individual.

What these two cases demonstrate is the extent to which UK privacy law remains in flux. The right to privacy will be further compromised by efforts to regulate the use of social media in light of their role in the riots that spread across English cities such as London and Manchester last August. Acting Metropolitan Police Commissioner Tim Goodwin argued that sites such as Facebook and Twitter provided a valuable intelligence asset for the police, as demonstrated by the case of two men who received four-year jail sentences for their use of Facebook to incite rioting in Warrington in August 2011.4 UK Prime Minister David Cameron’s response to the riots was to call for talks with representatives of Research in Motion, Facebook and Twitter to explore the possibility of temporary closures of their respective networks during periods of civil unrest. The UK government subsequently appeared to do a U-turn on these controversial plans, but has continued to seek closer cooperation with these service providers to obtain data about those who use them for anti-social and illegal behaviours.

The Communications Data Bill (CDB) includes controversial plans to allow the police, intelligence agencies and HM Revenue and Customs to access communication data such as information about the sender and recipient of Twitter direct messages, emails, and SMS.

The need for greater cooperation between the service providers and the police has arguably been addressed in the draft Communications Data Bill (CDB) announced by UK Home Secretary Theresa May on 14 June 2012. While data relating to email communications is already stored by ISPs for twelve months under the Regulation of Investigatory Powers Act (2000), CDB proposed surveillance of communications data on an unprecedented scale. The Bill included controversial plans to allow the police, intelligence agencies and HM Revenue and Customs to access communication data such as information about the sender and recipient of Twitter direct messages, emails, SMS text messages, and other forms of online communication. The Home Secretary argued that these measures were necessary in order to “protect the public and bring offenders to justice.”5 Civil liberties groups characterised the CDB as a ‘snoopers charter’ and criticised proposals that would allow the Home Secretary to order “any person” to hand over communication data to the authorities. Nick Pickles, director of Big Brother Watch, went as far as to suggest that the CDB constituted the “greatest attack on private life seen for generations.”6 Clearly, it is too early to make predictions on how many of these controversial measures will be implemented by the UK government. There are many issues in relation to the practicality of mass surveillance of communication data that need to be addressed. The estimated cost to the taxpayer of £2.5 billion would appear difficult to justify during a period of economic austerity and private companies may find the cost of storing communication data prohibitive.

The perceived anonymity of the micro-blogging site does not necessarily mean that users can act with impunity, as demonstrated by the South Tyneside case.

I think it would be premature to say that Twitter has killed privacy completely. The perceived anonymity of the micro-blogging site does not necessarily mean that users can act with impunity, as demonstrated by the South Tyneside case. The proposals to monitor online spaces in the CDB arguably pose a greater threat to the privacy of UK citizens. Personally, I would still be wary of what I post on Twitter. As one colleague remarked at a recent conference: ‘The internet never forgets.’

Dr. Paul Reilly is a lecturer in Media and Communication at the University of Leicester. His research focuses on social media and conflict transformation in the context of Northern Ireland, social networking sites and anti-social behaviour and sousveillance cultures in Web 2.0.