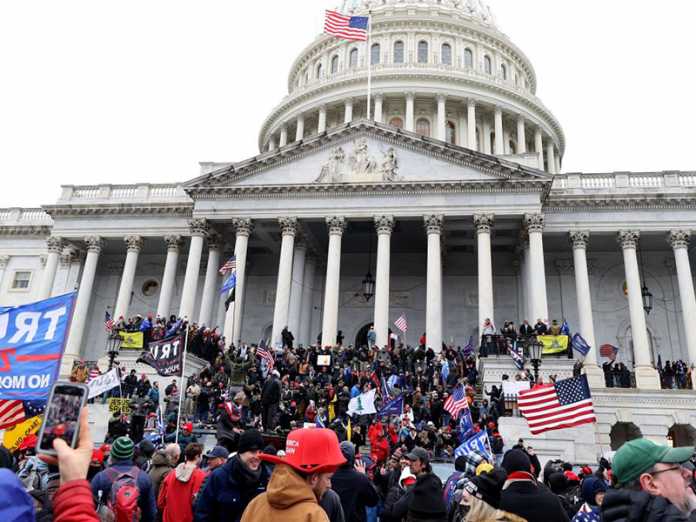 On January 6, 2021, a mob of white supremacists stormed the U.S. Capitol, presumably to overturn Trump’s defeat. Their final goal may have involved assassinations of elected officials, however.

After the “failed insurrection,” dozens of the mob were found to be watch-listed in the FBI Terrorist Screening Database. Most are suspected white supremacists. But the ultimate goals of some may have been even darker.

In a court filing, federal prosecutors have targeted one of the mob’s most colorful figures, Jacob Anthony Chansley; the shirtless “QAnon Shaman” with a headdress of coyote skin and buffalo horns. “The intent of the Capitol rioters,” the prosecutors believe, “was to capture and assassinate elected officials in the US government.”

At the “Save America” rally on the morning of January 6, Donald Trump, Jr. urged the mob to “take back our country” and march over to the Capitol, while former mayor Rudy Giuliani called for “trial by combat.” Seconded by several Republican members of Congress, they called action to undermine the “stolen presidency.”

After reaching the Capitol and overwhelming police barricades, the protesters assaulted police officers and journalists, erected a hangman’s noose and waved a Confederate flag, while proudly wearing white supremacist paraphernalia, including an Auschwitz concentration camp shirt.

Trying to take lawmakers hostage, they looted House Speaker Nancy Pelosi’s offices, occupied the empty Senate chamber and planted improvised explosive devices (IEDs) on the grounds and the offices of the Democrats and Republicans. As news images evidence, some police officers were taking selfies with the far-right protesters, opening up gates and guiding the rioters in the Capitol.

After nearly half a dozen deaths, hundreds of injuries and significant property damage, the FBI has opened more than 160 investigations into the events, while the House of Representatives has voted to impeach Trump for “incitement of insurrection.”

Democrats seek to preempt Trump’s re-election opportunities, while Republicans hope to distance Trump from their party. But it may be too little too late; a number of Republicans have already embraced white supremacists’ war rhetoric and some are adherents of the quasi-idiotic QAnon conspiracy ploy (that US government is run by a cabal of Satan-worshipping pedophiles).

Infiltration of US law enforcement

Since the creation of the Ku Klux Klan in 1865, white supremacists have maintained ties with law enforcement agencies. In the past two decades, those links have grown deeper, however.

According to recent report by former FBI special agent Michael German, police associations with militias and white supremacists have been uncovered in many states. When President Trump arrived in office in early 2017, there were 100 active white nationalist and as many active neo-Nazi groups in the US. According to US Department of Homeland Security, white supremacist violent extremists “have been exceptionally lethal in their abhorrent, targeted attacks in recent years.”

During the 2014-15 unrest in Ferguson, Missouri, the white supremacist Oath Keepers patrolled streets and rooftops with semi-automatic rifles. In Washington DC, the group’s founder Stewart Rhodes, a former soldier and Yale law school graduate, stood outside the Capitol building. The veteran militia group has pledged to ignite a civil war on Trump’s behalf.

In the past two decades, US campaign finance has been transformed into a money game dominated by big corporations and the hyper-wealthy 1% to 10% of the population. Ultra-rich financiers favor ultra-conservative Republicans.

It is this tiny group of funders that’s also behind the politicians favored by the insurrectionists and led by the Club of Growth; an anti-tax group sponsored by billionaires, such as the shipping-supply giant Richard Uihlein and options-trading king Jeffrey Yass. Both have been eager to overturn the US elections results.

Through its Super-PAC, the Club donors include the far-right billionaire Peter Thiel whose Palantir Technologies made fortunes in the Trump era; hedge-fund manager Paul Singer who has used debt to default entire nations from Congo DR to Argentina; and most prominently, hedge funder Robert Mercer, Trump’s financier.

Some $20 million was steered to these politicians in the 2018 and 2020 campaigns, led by Ted Cruz and Josh Hawley, as well as Marco Rubio. Along with the far-right gun-rights activist Lauren Boebert, Cruz and Hawley have pushed the unfounded conspiracy theory that the 2020 election was “stolen from Trump” inciting turmoil that led to the storming of the Capitol.

They are not alone. The Club has supported the campaigns of more than 40 conservative Republicans who recently voted to undermine US election results.

In America, the rise of the insurrectionists reflects extensive social collateral damage following four decades of neoliberal economic policies. Since the ’80s, the nation’s 1% hyper-wealthy elite has prospered more than any other social group, whereas the middle class has shrunk dramatically. Meanwhile, institutional racism prevails, as evidenced by deep gaps between whites and blacks in income and wealth.

As progressive taxation has been undermined, while corporate taxation has been largely offshored to tax havens, US welfare state is bleeding. The redistributive mechanisms that ensure not just economic growth but social equity have shrunk.

Hence, too, the rising morbidity and mortality of middle-aged white (non-Hispanic) Americans. As the Nobel-awarded Angus Deaton has warned, the trend is unique among rich-income economies. And it fueled Trump’s 2016 election triumph.

The tumultuous but deadly insurrection is only a beginning. January 20 inauguration could witness counter-inaugurations. So could Biden’s State of the Union address in February. Or more could follow when and where complacency returns.

After four decades of economic polarization, deep political divisions, misguided forever wars, coupled by four years of appeasement of far-right supremacists by the White House, a new, harder and more unpredictable era has begun in America.

Fueled by longstanding economic, political, social and military forces, these trends are structural. They won’t go away anytime soon.

Dr Dan Steinbock is the founder of Difference Group and has served as research director at the India, China and America Institute (USA) and visiting fellow at the Shanghai Institutes for International Studies (China) and the EU Center (Singapore). For more, see https://www.differencegroup.net/