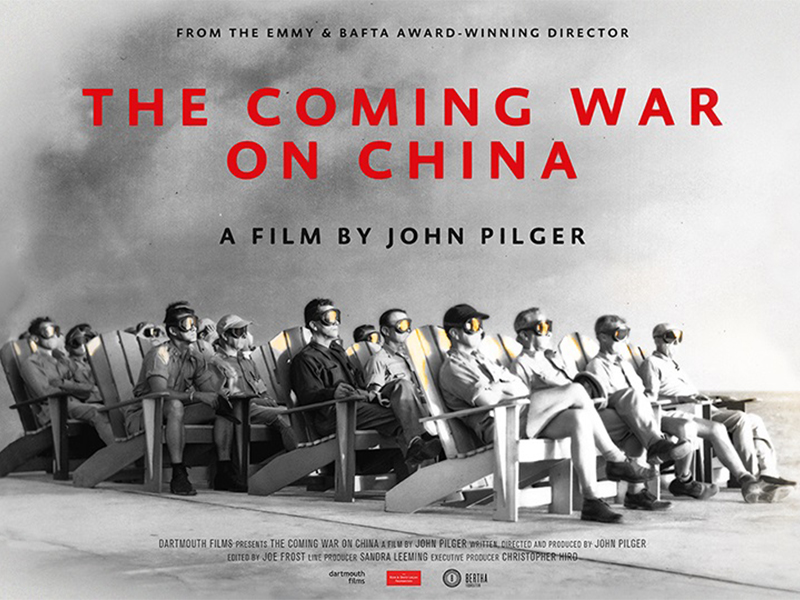 When I first went to Hiroshima in 1967, the shadow on the steps was still there. It was an almost perfect impression of a human being at ease: legs splayed, back bent, one hand by her side as she sat waiting for a bank to open. At a quarter past eight on the morning of 6 August, 1945, she and her silhouette were burned into the granite. I stared at the shadow for an hour or more, unforgettably. When I returned many years later, it was gone: taken away, “disappeared”, a political embarrassment.

I have spent two years making a documentary film, The Coming War on China, in which the evidence and witnesses warn that nuclear war is no longer a shadow, but a contingency. The greatest build-up of American-led military forces since the Second World War is well under way. They are in the northern hemisphere, on the western borders of Russia, and in Asia and the Pacific, confronting China.

The great danger this beckons is not news, or it is buried and distorted: a drumbeat of mainstream fake news that echoes the psychopathic fear embedded in public consciousness during much of the 20th century.

Like the renewal of post-Soviet Russia, the rise of China as an economic power is declared an “existential threat” to the divine right of the United States to rule and dominate human affairs.

To counter this, in 2011 President Obama announced a “pivot to Asia”, which meant that almost two-thirds of US naval forces would be transferred to Asia and the Pacific by 2020. Today, more than 400 American military bases encircle China with missiles, bombers, warships and, above all, nuclear weapons. From Australia north through the Pacific to Japan, Korea and across Eurasia to Afghanistan and India, the bases form, says one US strategist, “the perfect noose”.

A study by the RAND Corporation – which, since Vietnam, has planned America’s wars – is entitled, War with China: Thinking Through the Unthinkable. Commissioned by the US Army, the authors evoke the cold war when RAND made notorious the catch cry of its chief strategist, Herman Kahn — “thinking the unthinkable”. Kahn’s book, On Thermonuclear War, elaborated a plan for a “winnable” nuclear war against the Soviet Union.

John Pilger has been a war correspondent, author and documentary film-maker. He is one of only two to win British journalism’s highest award twice, for his work all over the world. He received the United Nations Association Peace Prize and Gold Medal, and the prestigious Sophie Prize for ‘thirty years of exposing deception and improving human rights’.

His 1979 documentary, the epic Cambodia Year Zero is credited with alerting the world to the horrors of the Pol Pot regime. Year Zero is ranked by the BFI as among the ten most important documentaries of the 20th century. His Death of a Nation, about East Timor, had a similar impact in 1994. He has made 58 documentary films. He is the author of numerous best-selling books, including Heroes and A Secret Country, The New Rulers of the World and Hidden Agendas.

“John Pilger unearths, with steely attention to facts, the filthy truth and tells it as it is” – Harold Pinter.

“John Pilger’s work has been a beacon of light in often dark times. The realities he has brought to light have been a revelation, over and over again, and his courage and insight a constant inspiration.” – Noam Chomsky.