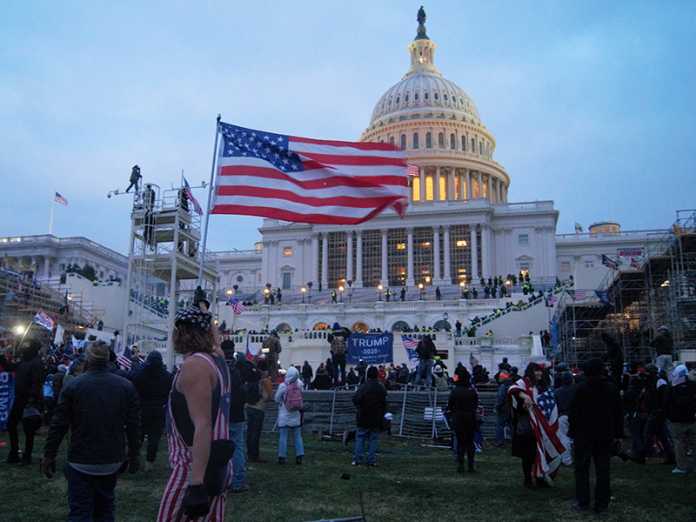 The storming of the US Capitol on January 6th, 2021 by an angry far-right mob was an exigent distraction of historic proportions. Indeed, it may be an augur of what is to come. Even so, a president with neo-fascist white supremacist sentiments and an angry far-right mob are necessary but insufficient conditions for fascism. The road to fascism requires fascists who want complete control of all the organs of the system, the presence of an existential communist threat, and uncontrolled disorder in the streets. That said, it would be a mistake if this distraction causes us to overlook that above all the real enemy of working people is the ruling elite mob, not unmoored far-right mobs. The storming of the US Capitol is a visible sign of the system in crisis.

It is a rare occurrence when the US Capitol is stomped. Least by a neo-fascist and white supremacist (some of whom were armed) mob supported by the president himself. The president used demagogy to stir up and convince these people that the election was stolen. Incited, they came prepared to even kill to take back their country.

The mob stormed the Capitol to overturn the results of the 2020 presidential election in favor of President Trump. The attempted coup failed. It failed because the time for fascism had not arrived in the US-not yet.

The images of the Capitol in the aftermath of the riot had all the hallmarks of chaos. The rioters failed to overturn the election results, as well as to siege power from the US government. The relatively easy access into and exit out of the Capitol building suggests that there may have been other inside collaborators with the mob, in addition to the president. When it was over, five people had died in the mayhem including two Capitol police, one by suicide. So far, a small number of those who participated in the riot have been arrested. Possibly, one unintended consequence of the rampage is splintering and restructuring of the Republican (Trump’s base could form a new party) and Democratic (liberal base could form a new party) parties.

Also, the riot creates an opening for the state to install new oppressive measures and laws. Predictably, these measures will place further restrictions on workers’ rights. For example, social media’s restrictions on Trump’s antics to what they perceive as dangerous, may be used selectively to restrict freedom of speech. As the economic, COVID-19, and environmental crises continue, mob activities and other forms of resistance could intensify. Globally and in the U.S.A., far-right gangs have been growing in membership. Unquestionably, they must be resisted and vigorously put down wherever they appear.

Before Mr. Trump became president, there was already a whole host of problems, which have gotten worse. Food insecurity was on the rise. Wages were stagnant. Wealth disparity between the rich and the rest was widening. Medical care was not accessible to large swaths of the population. There was a shortage of affordable housing. There was an increase in racist attacks. Concerns about global warming had risen to a level of urgency. Then COVID-19 sent the economy into a tailspin. It is likely that many of those who participated in the riot have experienced or are experiencing some of these insecurities.

As these conditions become worse, people will become desperate and angry. It is not surprising that an exemplar of the oligarchy and a demagogic insider like Mr. Trump comes along and presents himself as an outsider who will solve all these problems. But neither Trump or the Republican party nor Biden or the Democratic party can or will fix these problems. And the far-right will continue to have appeal.

Before and since the mob’s march on the Capitol, fascism has been mentioned countless times. This compels me to say a few words about fascism. Fascism is the most extreme form of capitalism. It is an alliance between the government and corporate interests who finance, orchestrate, and put in motion uncontrolled “mass gangs” that come from the middle class, working class and poor. Its leaders use lies and innuendos and resort to methods of divisiveness and civil war to purge and annihilate first and foremost militant workers and communists. Then, they call for peace. After which fascists are given complete control of all state institutions, including education, the police, the prisons, the military, the courts, the press, social media, and religious institutions.

Fascism is invoked when the ruling elite believes there is an existential communist threat, and the normal tools of oppression (police, military, judiciary) are unable to restore order. The mob that recently stormed the US Capitol was not socialists and communists. The riot was brought under control within a few hours. To the extent that there are communist organizations in this country, they are disparate and atomized. Evidenced by the defeat of Trump, there is no consensus to install fascism in the US by the ruling elite-at least not right now. Make no mistake though that at the first sign of any existential threat, the ruling elite from business and finance and their political agents, the Republicans and Democrats, will not hesitate to organize and orchestrate far-right fascist mobs to crush legitimate dissent-this would not be the first time. The working class needs a working-class political party, worker-controlled unions, and other worker organizations that are completely disconnected from the establishment to advocate in its interest.

Anthony A. Gabb, Ph.D. is a retired Professor of economics. He has taught economics for 40 years, 32 of which was at St. John’s University, New York. His most recent work includes “Can the Fascist Germ Rise to Epidemic Levels in the USA Today?” and “Financial Oligarchy Feudal Aristocracy”. He has published and delivered dozens of papers, a book chapter, and a book review, interviewed by The New York Times, Corriere della Sera, and has appeared on Channel 1 New York.