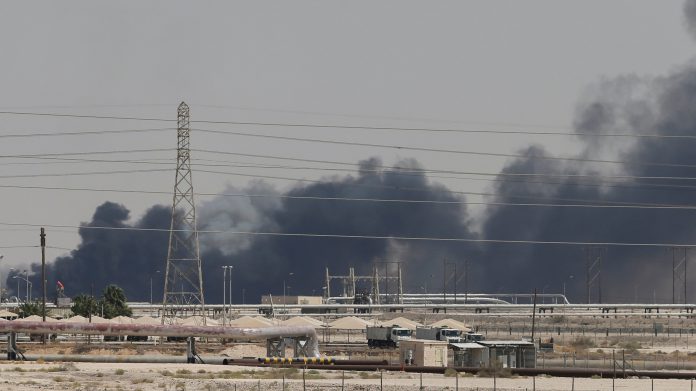 On Saturday morning, September 14, 2019, a few drones – were they drones or long-range missiles? – hit the Saudis most important two oil fields, set them ablaze, apparently knocking out half of the Saudi crude production – but measured in terms of world production it is a mere 5%. Could be made up in no time by other Gulf oil producers – or indeed, as the Saudis said, by the end of September 2019 their production is back to ‘normal’ – to pre-attack levels.

The financial reaction was immediate. Saudi stocks fell, the oil prices rose, then settled and later fell again. It was an immediate reaction of major banks’ algorithmic speculation with about 10,000 operational hits a second. A trial for larger things to come?

The Yemeni Shiites, the Houthis, immediately claimed credit for the attack, saying they sent some ten “suicide drones” to the major Saudi oilfields and processing center. US Secretary of State, Mike Pompeo, immediately and without a shred of evidence blamed Iran for the ‘terror attack’ – immediately more economic sanctions were imposed on Iran (Trump proudly said, the most severe ones ever put on a country), for an occurrence they had nothing to do with. – The Saudis, as if confused, held off on accusations. And as of this day, they refrain from accusing Iran. And this despite the fact that there is no love left between SA and Iran which would make blaming Iran a easy feat.

Also immediately following the attack, a high Iraqi Government official assured that the attack was launched from Iraqi soil, not from Yemen. But shortly thereafter Iraqi officials vehemently denied that they had anything to do with this attack. Yet, the launch location Iraq was “confirmed” by the leading Iraqi analyst based in the US, Entifadh Qanbar, President and Founder of the Future Foundation. The Asia Times says, he follows closely developments in his home country, and he has many associates feeding him with information that has proved more than once to be accurate. [Apparently], his information about the attack coming from Iraq is backed by prior history and by Pompeo’s clear declaration.