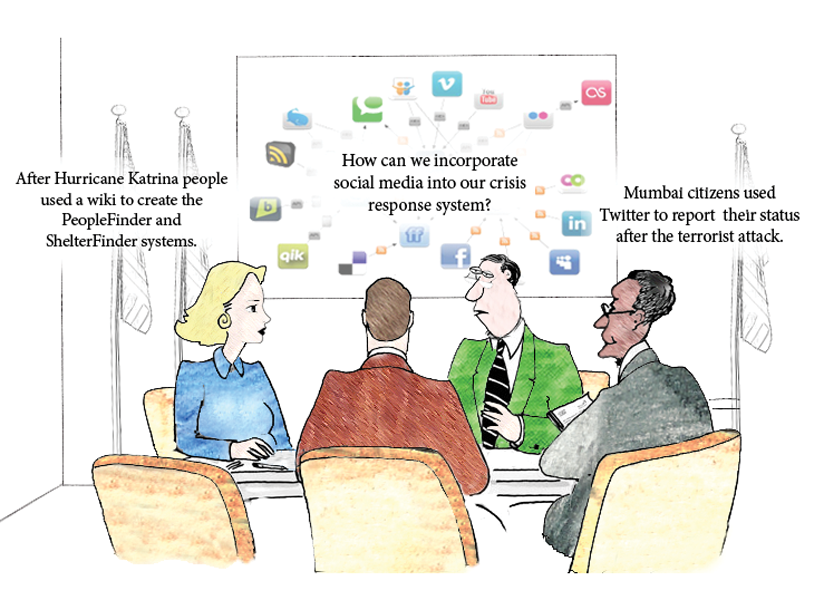 Can populations self-organize a crisis response? This is a field report on the first two efforts in a continuing series of exercises termed Exercise 24 or X24. These exercises attempted to demonstrate that self-organizing groups can form and respond to a crisis using low-cost social media and other emerging web technologies.

Plotnick and White (2010) describe social media as generally being attributed to the collaborative applications supported by Web 2.0 technologies. These include, but are not limited to Twitter, Facebook, Myspace, wikis, and blogs. Blogs, wikis, and Myspace were the first applications becoming popular in the early 2000s while Facebook and Twitter are more recent creations. The large number of Facebook users, approximately 750 million, show the popularity of social media. Additionally, as social media became popular, individuals and first responders began to use social media for rapid communication to mitigate the unpredictability of crises and the complexity of crisis response to help themselves. Examples include:

• concerned citizens used a wiki after Hurricane Katrina to organize, collaborate, and rapidly create the PeopleFinder and ShelterFinder systems (Murphy and Jennex, 2006).

• citizens affected by the 2007 San Diego wildfires used a wiki to pool knowledge on which homes burned and which survived when the local media failed to support their needs (Jennex, 2010).

• victims trapped by falling debris during the 2010 Haiti earthquake used texting and/or Facebook to alert their friends and family to their location and condition (Boodhoo, 2010).