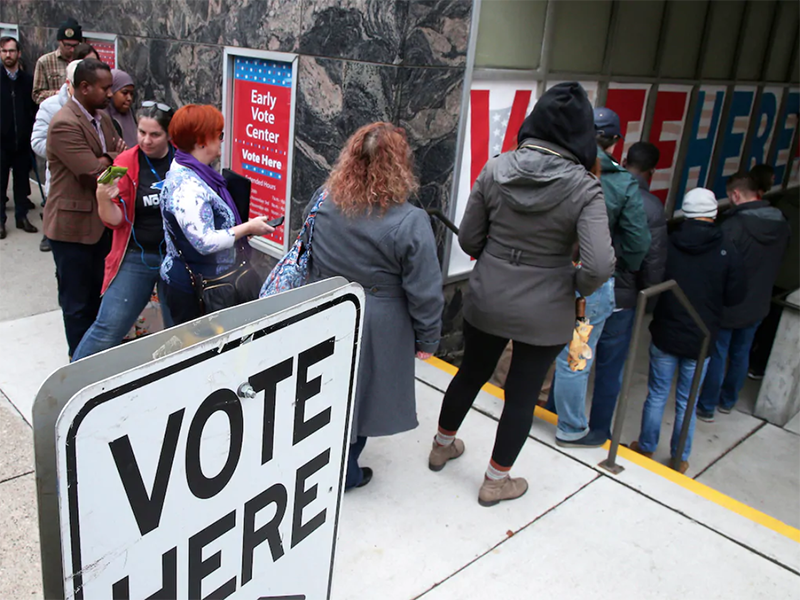 As Americans went to the polls yesterday, November 6, 2018, no doubt some were thinking of the hordes of immigrants we’re told are invading the US southern border.  Or they were remembering the pipe bombs, the killings in Pittsburg, or the racist murders occurring almost daily elsewhere that barely get press coverage anymore.

If they’re Millennials, they may be considering whether even to vote or not, since neither wing of the corporate Party of America—aka Republicans or Democrats—have done much for them over the past ten years. Burdened mostly with low paying service jobs and $ trillion dollar student debt payments that consume roughly 37% of their paychecks, with real incomes well below what their parents were earning at their age, and with prospects for the future even more bleak, many Millennials no doubt wonder what’s in it for them by voting for either party’s candidates.  Will Millennial youth even bother to turn out to vote?  As an editorial in the Financial Times business newspaper recently noted, “Only 28% of Americans aged 18 to 29 say they are certain to vote this November”. Political cynicism has become the dominant characteristic of much of their generation—deepening since the politicians’ promises made in 2008 have failed to materialize under Obama and now Trump.

If they’re Latinos and Hispanics, as they go to the polls they are aware their choice is either Trump Republicans who consider them enemies, criminals and drug pushers; or Democrats who, in the past under Obama, deported their relatives in record numbers and repeatedly abandon programs like DACA (‘Dreamers) as a tactical political necessity, as they say. Who will they trust least? One shouldn’t be surprised if they too largely sit it out, harboring a deep sense of betrayal by Democrats and concern they may soon become the next ‘enemy within’ target of Trump and his White Nationalist shock troops who are being organized and mobilized behind the scenes by Trump’s radical right wing buddy, Steve Bannon, and his billionaire and media friends.

If they’re African Americans, they know from decades of experience that nothing changes with police harassment and murders, regardless which party is in power.

If they’re union workers in the Midwest, they know the Democrats are the party of free trade and job offshoring, while Republicans are the party favoring low minimum wages, elimination of overtime pay, privatization of pensions, and cuts to social security.

All these key swing groups of Millennials, Hispanics, African-Americans, and union workers in the midwest—i.e. those who gave Obama an overwhelming victory in 2008, gave him one more chance in office in 2012 despite failure to deliver, and then gave up on the unfulfilled promises in 2016—will likely not be thinking about the real ‘issues’ as they go to the polls. For the ‘Great Distraction’ is underway like never before.

It’s the ‘enemy within’ that’s the problem, we’re told by Trump. And the ‘enemy without’. Or, in the case of the immigrant—it’s both: the enemy without that’s coming in!  So put up the barbed wire. Grab their kids when they arrive, as hostage bait. Send the troops to the border right now, to stop the hordes that just crossed into southern Mexico yesterday. Hurry, they’re almost here, rapidly proceeding to the US on foot. (They run fast, you see). They’re in Oaxaca southern Mexico. They’ll be here tomorrow, led by Muslim terrorists, carrying the bubonic plague, and bringing their knapsacks full of cocaine and heroin.

Both sides—Trump, Republicans, Democrats, as well as their respective media machines—sidestep and ignore the deep malaise shared by Americans today. Older Americans shake their heads and mumble ‘this isn’t the country I grew up in’ while the younger ask themselves ‘is this the country I’ll have to raise my kids in’?

And if the enemy immigrant is not enough is not enemy enough, the ‘enemy within’ is increasingly also us, as Trump adds to his enemies list the ‘mob’ of Americans exercising their 1st amendment rights to assembly and protest against him. And don’t forget all those dangerous Californians who won’t go along with his climate, border incarceration, trade or other policies. Or their 80 year old Senator Diane Feinstein, their ring-leader in insurrection. They’re all the ‘enemy within’ too.  The chant ‘lock ‘em up’ no longer means just Hillary. So Trump encourages and turns loose his White Nationalist supporters to confront the horde, the mob, and their liberal financiers like George Soros. If all this is not an unraveling, what is?

Not to be outdone in the competition for the Great Distraction, there’s the Democrats resurrecting their age-old standby ‘enemy without’: the Russians. They’re into our voting machines. Watch out. They’re advancing on Eastern Europe, all the way to the Russian-Latvian border. Quick, send NATO to the Baltics! Arrange a coup partnering with fascists in Ukraine! Install nuclear missiles in Poland! And start deploying barbed wire on the coast of Maine and Massachusetts, just in case.

However, behind all the manufactured fear of immigrants, US demonstrators, and concern about violence- oriented white nationalists whipped up and encouraged by Trump and his political followers—lies a deeper anxiety permeating the American social consciousness today. Much deeper. Whether on the right or left, the unwritten, the unsaid, is a sense that American society is somehow unraveling. And it’s a sense and feeling shared by the left, right, and center alike.

Both sides—Trump, Republicans, Democrats, as well as their respective media machines—sidestep and ignore the deep malaise shared by Americans today. Older Americans shake their heads and mumble ‘this isn’t the country I grew up in’ while the younger ask themselves ‘is this the country I’ll have to raise my kids in’?

There’s a sense that something has gone terribly wrong, and has all the appearance will continue to do so.  It’s a crisis, if by that definition means ‘a turning point’.  And a crisis of multiple dimensions. A crisis that has been brewing and growing now for at least a quarter century since 1994 and Newt Gingrich’s launching of the new right wing offensive that set out purposely to make US political institutions gridlocked and unworkable until his movement could take over—and succeeded. It’s a crisis that everyone feels in their bones, if not in their heads. The dimensions of the unraveling of America today are many.  Here’s just some of the more important:

Dr. Rasmus is author of the forthcoming book, ‘The Scourge of Neoliberalism: US Policy from Reagan to Trump’, forthcoming 2019 by Clarity Press. He hosts the weekly radio show, Alternative Visions, on the Progressive Radio Network and blogs at jackrasmus.com. His twitter handle is @drjackrasmus.