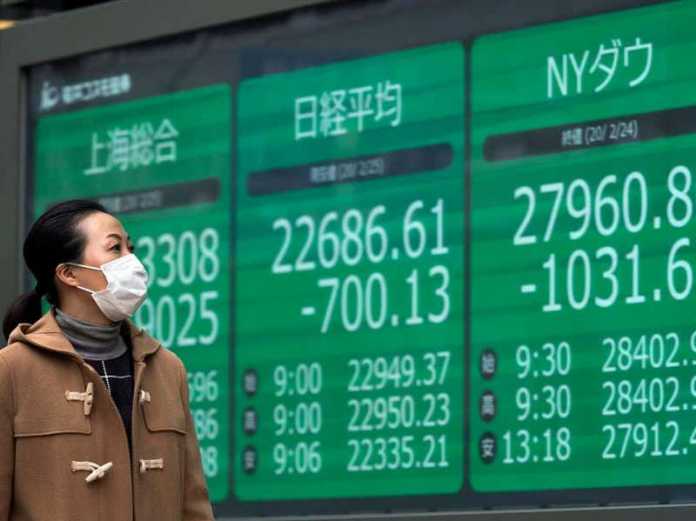 During World War II the US lost about 500,000. The enemies were afar, offshore. Today the Coronavirus is projected to eventually kill at least twice that number Americans. An enemy within our very midst. An enemy that has succeeded in invading us everywhere.

The enemy has already effectively shut down much of our economy, is making millions jobless, threatening to sabotage our banking & financial system. The war-like destruction of our economy is already underway.

The response must be no less an economic war as World War II economic mobilization was a war to defend the lives of millions of our citizens.

But so far politicians and policy makers in Washington, of both parties, have not much of a necessary war response mentality.

Trump at first even denied we were being invaded and the virus enemy was not even armed. He said it would go away by April. It was not dangerous. Meanwhile the enemy was laying its biological ‘minefields’ and the actual killing had begun. Trump even opened up our major city airports to the invader. It’s not by accident that the virus took its initial foothold in Washington State, California, and the big airport cities in the northeast of the country.

Democrat leaders in Congress were more somewhat more aware of the threat than Trump, but deficiently so as well. Their response to the economic war being waged upon us is to provide more unemployment insurance, free testing, and similar measures. While necessary, such measures were, and remain, also grossly insufficient. It’s like calling out the Coast Guard to stop a military assault landing by the virus on our shores. The Democrats now have a bill in Congress costing about $750 billion in economic war defense spending. Senate Republican leader McConnell delayed and opposed even that. Now the Republicans and Trump are proposing $800 billion. Those amounts are grossly insufficient. Both parties are still well behind the curve.

US politicians of both parties have been exhibiting a mentality similar to Neville Chamberlain, the British Prime Minister, who in 1938 returned from Munich and declared he had secured ‘peace in our time’ by his deal with Hitler. Well, US politicians think they have this virus ‘under control’ and that they can reverse the destruction of the US economy by passing minimal $700-$800 billion spending bill. They think they can control the virus and its devastating impact now underway on the US economy. They can’t until they understand this is a biological-economic war and the US must be mobilized similar to what it did in 1942.

Today the US economy is experiencing something similar to an ‘economic pearl harbor’ attack of 1941.  It is fighting a rear guard action, retreating to a ‘Bataan-like’ peninsula.

The US war mobilization effort in 1942 was unlike any ever implemented by any country in history. It was an all-out unprecedented and effective effort. America prevailed over enemies in World War II largely because it out-produced them by tenfold in equipment and material. Once those resources began flowing in 1942 and after, neither Imperial Japan nor Nazi Germany had a chance of winning.

Now we face an enemy, the virus, that has invaded every corner of the country. An enemy that will kill many more Americans that either Japan imperialists or the Nazis. And yet we are not mobilization the US economy to confront it. The politicians are addressing it piecemeal, incrementally, little by little, and are well behind the curve in terms of economic defense and response.

The virus is not only waging biological war against us; it is simultaneously waging economic war—to destroy the resources needed to ensure victory.

The US ‘economic war mobilization’ against the virus enemy must be raised immediately to 40% of GDP again!

The US central bank, the Federal Reserve, has provided at minimum and within one week, more than $2.2 trillion. That’s to pre-emptively bail out the US banking system and ‘make whole’ thousands of private investors, often billionaires!

If the Federal Reserve can bail out the banks even before they fail to the tune of $2.2 trillion so far—why can’t Congress bail out Main St. and working class families with at least a similar amount? And that’s just to start. We’ll need another $1-$2 trillion before it’s over. That total will require a doubling of US government spending from 20% to 40% as a share of GDP.

Economic War Mobilization: How to Pay for It

Some may argue where can we get the money for that kind of spending. They similarly argued that in 1942. But the money was there. And it’s here today as well.

Here’s three ways the US financed and paid for economic war mobilization in 1942-45 and how we can do the same today:

Congress in 1942 passed a massive tax increase bill to help fund the war. It followed it up with more tax increase bills in 1943, 1944, and 1945.  It then issued victory bonds to help finance further. The US Treasury can do the same today. The US can also run a budget deficit, to be repaid later—again as we did in World War II.

US politicians of both parties have run up annual budget deficits since 2000 and raised the total national debt as a result from $4T in 2000 to more than $22 trillion today. Trump’s 2018 and 2019 tax cuts—most of which are enjoyed by big corporations and investors—will mean the national debt will rise to at least $31 trillion by 2028, according to the Congressional Budget Office. But that’s before the current crisis and the collapsing of the US economy (and resulting tax revenue collapse). The US national debt by 2028 will be $35 trillion or more!

The point is most of this national debt, and the annual deficits that cause it, has been due to the massive tax handouts since 2000 for the rich and big corporations. Those tax cuts amount to no less than $15 trillion, passed by both political parties! It’s time to take that back and use the funds to help fight the real war against the virus now.

It’s also time for the Federal Reserve Bank and US Treasury to not just bail out the bankers, but help bail out Main St.  Instead of just buying bonds held by the rich and investors at subsidized prices, it should raise additional money by issuing special Coronavirus War bonds, the proceeds from which must be earmarked for direct spending for Main St. only—i.e. for bailing out working and middle class families losing income, losing their homes and apartments, losing their autos, and preventing small businesses of 100 employees or less from going bankrupt. I’m not talking about loans, but about grants to working families and businesses. Big corporations can fend for themselves. They’ve built up massive profit war chests over the last decade. Ditto for big bankers. In any event, the central bank, the Federal Reserve, has already indicated it will spend trillions of dollars to make them whole.

Who will make working families, the middle class, and small businesses whole? Will Congress dribble out financial support, while the central bank opens up its free money firehose to bankers and investors?

Make no mistake, we’re in a war against the virus. It will take economic wartime mobilization to win it. But if the politicians don’t wise up fast and adopt a war time mentality, millions more Americans will perish and the death toll will dwarf that of World War II.

Dr. Rasmus is author of the just published book, ‘The Scourge of Neoliberalism: US Economic Policy from Reagan to Trump’, Clarity Press, January 2020. His website is http://kyklosproductions.com. Follow Dr. Rasmus on his blog, jackrasmus.com, as he writes on developing events related to this topic. And on his twitter feed, @drjackrasmus, where hourly changes in events are commented on as well.