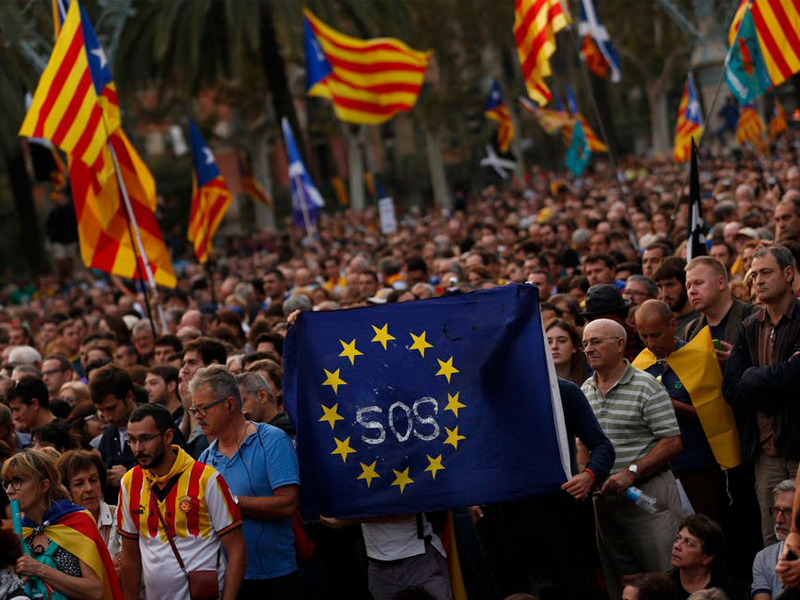 By Georgia Monaghan and Amy Maguire

Catalonia is claiming self-determination in the form of independence from Spain. This assertion of independence has implications for the integrity of the Spanish state. Unsurprisingly, Spain’s response has been resistant and repressive. The Catalan case also raises concern around Europe regarding the potential precedent effect for other secessionist movements.

On 1 October 2017, the Catalan regional government held a referendum on independence. The referendum seemed to point to majority Catalonian support for self-determination in the form of secession from Spain. Forty per cent, or over two million eligible Catalans, voted, with 90% of voters supporting independence.

Yet the significance of this result is contested. The referendum was marred by violence and repression. Catalan emergency officials estimated that 761 Catalan civilians and 12 police were injured during the referendum, during which Spanish police forcibly obstructed voting and attacked civilians with batons and rubber bullets. The shocking scenes may have discouraged some Catalans from attempting to vote.

On the other hand, six of ten eligible Catalan voters abstained from participating in the referendum. An alternative reading of this low turnout is that many regarded the referendum as a stunt, and ignored it in preference to remaining within Spain.

The validity of the referendum has also been brought into question. The vote did not adhere to democratic conventions, such as the requirement for a minimum threshold of votes. Further, there have been accusations of voter fraud following evidence that some Catalans cast multiple votes.

Regardless, it is apparent that the Spanish state was determined to suppress the referendum, and Spanish authorities used excessive force to disrupt the vote. In defiance of Madrid, Catalan President Carles Puigdemont proceeded to declare independence on 19 October. The Spanish central government responded by stating its intention to invoke article 155 of the Constitution.1 That move, while unprecedented, would suspend Catalonia’s autonomy and give full governance power to the central authority in Madrid.

Georgia Monaghan has a Bachelor of Business (Distinction)/Bachelor of Laws (Hons Class I) from the University of Newcastle, Australia. Georgia is a Research Assistant in the University of Newcastle Law School, specialising in human rights law. Her interests include international human rights, ethical value chain governance (particularly in the area of ethical fashion) and international labour law.

Dr. Amy Maguire is a Senior Lecturer at the University of Newcastle Law School. Amy’s research and teaching span a range of topics in public international legal scholarship, including self-determination, climate change and human rights, indigenous rights, the rights of refugees, capital punishment and international criminal law. She is a featured columnist for The Conversation.