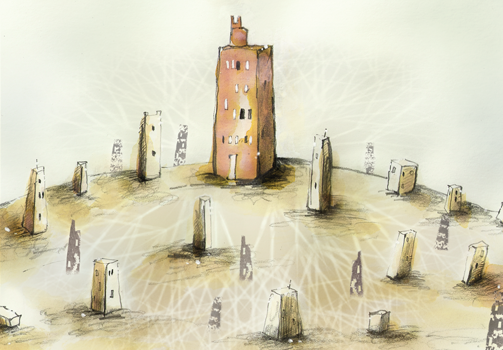 Perhaps the single biggest distortion to the free enterprise system is when a number of private institutions are deemed by political and regulatory authorities as too systemic to fail. Resources are trapped in corporate structures that have repeatedly proven their incompetence, and further resources are sucked in from the taxpayer as these institutions destroy value. Indeed, these institutions can play a game of chicken with the authorities by refusing to take adequate precautions against failure, such as raising equity; confident in the knowledge the authorities will come to the rescue when needed.

The consequences are observationally identical to those in a system of crony capitalism. Indeed, it is hard for the authorities to refute allegations of crony capitalism – after all, the difference is only one of intent for the authorities in a free enterprise system do not want to bail out systemically important institutions, but are nevertheless forced to, while in crony capitalism, they do so willingly. More problematic, corrupt officials can hide behind the doctrine of systemic importance to bail out favored institutions. Regardless of whether such corruption takes place, the collateral damage to public faith in the system of private enterprise is enormous, especially as the public senses two sets of rules, one for the systemically important, and another for the rest of us.

As important as the economic and political damage created in bad times, is the damage created in good times because these institutions have an unfair competitive advantage. Some institutions may undertake businesses they have no competence in, get paid for guarantees they have no ability to honor, or issue enormous amounts of debt cheaply only because customers and investors see the taxpayer standing behind them. Other institutions may deliberately create complexities, fragilities, and interconnections so as to become hard to fail. In many ways, therefore, I believe the central focus of any new regulatory effort should be on how to prevent institutions from becoming too systemic to fail.