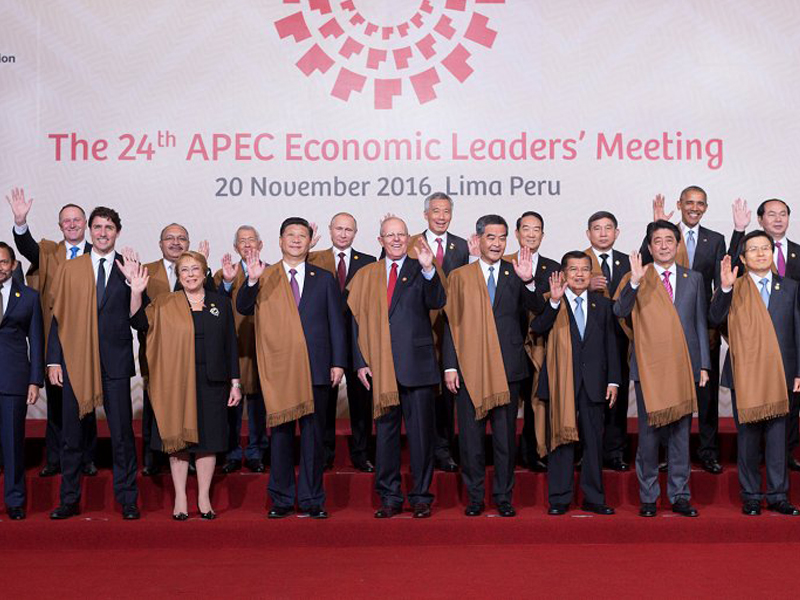 During the weekend, the Asian-Pacific nations embraced the dream of free trade. Today, President-elect Trump buried it.

Last weekend, Asia-Pacific Economic Cooperation (APEC) summit made it clear that it would move forward with trade pacts; with or without the US.

Right after the Lima summit, President-elect Donald Trump unveiled his plans for the first 100 days in office, which focus on campaign promises that will not require congressional approval. Among his first actions, Trump said he would “issue our notification of intent to withdraw from the Transpacific Partnership” and replace it with negotiating “fair bilateral trade deals”.1

Trump campaigned on a promise to halt the progress of the TPP trade deal. The world is different after his triumph – including world trade.

From Berlin Wall to Trump Wall

In the late 1980s, as the Cold War eclipsed in Europe and regional trade blocks surfaced around the world, Australia called for more effective economic cooperation across Asia Pacific, which led to the first APEC talks.

In Washington, neither Asia nor APEC was yet a priority. Rather, the focus was on the North American Free Trade Agreement (NAFTA), which would tie together the economies of the US, Canada and Mexico. “We have got to stop sending jobs overseas,” warned presidential candidate H. Ross Perot in 1992. “There will be a giant sucking sound going south.” But unlike Trump, he appealed to only one tenth of Americans.

Sure, there was free-trade skeptics among Republicans and Democrats, but the bipartisan majority still believed in free trade. While negotiated and signed by President George H.W. Bush, NAFTA became effective under President Bill Clinton in 1994.

By the early 2000s, President George W. Bush sought to extend the NAFTA. However, critics argued that the Free Trade Agreement of the Americas (FTAA) could split South America. So the initiative crumbled against opposition by Brazil and its progressive President Lula.

Washington began talks for a significantly expanded, “high-standard” free trade agreement, which would reflect US alliances in Asia and Latin America but exclude China.

In the Obama era, Washington began to tout the Trans-Pacific Partnership (TPP). This initiative originated from a 2005 free trade agreement among just Brunei, Chile, New Zealand and Singapore. After 2010, Washington began talks for a significantly expanded, “high-standard” free trade agreement, which would reflect US alliances in Asia and Latin America but exclude China.

While the original TPP was small but open, inclusive and had room for both US and China, the Obama plan sought to attract a dozen nations but grew secretive, exclusive and shunned China. Yet, it was an integral part of Obama’s “pivot to Asia”, which was intellectually formulated by former Secretary of State Hillary Clinton. That vision is now history.

If the regional free trade agreements drafted by advanced economies were energised by the fall of the Berlin Wall in the late 1980s, their demise today is characterised by the Trump dream of a Wall against Mexico. Along with the TPP, Trump will seek to re-define the NAFTA and the proposed Transatlantic Trade and Investment Partnership (TTIP) pact with Europe.

After the US presidential election, some of Obama’s TPP partners – including Japan and Mexico – pushed for a modified TPP agreement before Trump could tear up the agreement. Prime Minister Abe hoped to hedge between a revised TPP, a bilateral free trade deal with the US, and China-led talks at a Regional Comprehensive Economic Partnership (RCEP).

But the RCEP is no alternative to either US- or China-led broad trade pacts. It reflects the interests of emerging ASEAN economies (and their trade partners in advanced economies), but has a slower implementation schedule and humbler goals.

Until recently, the US pivot in the Asia Pacific has relied mainly on increasing security cooperation, whereas China’s focus is on economic development.

Ever since the Trump triumph, apprehension has also spread across Latin America, which is struggling to prepare for the Fed’s impending rate hikes. In the past week or two, Mexican peso, Brazilian real and other Latin American currencies have already suffered heavy hits, which have been mirrored across the Pacific by the sell-off of Asian currencies.

Until recently, the US pivot in the Asia Pacific has relied mainly on increasing security cooperation, whereas China’s focus is on economic development. Since 2013, President Xi Jinping has proactively pushed for broader economic ties with both emerging Asia and Latin America.

In Lima, Peruvian President Pedro Pablo Kuczynski said that, if the US pulls out, he would support an Asia-Pacific trade accord that includes China and Russia. Like Peru, even Australia is now moving behind the China-led Free Trade Area of the Asia Pacific (FTAAP). Ironically, China’s initiative builds on a US plan.

In 2006, C. Fred Bergsten, then chief of an influential Washington think-tank, made a forceful statement in favor of the FTAAP, which he thought would represent the largest single liberalisation in history. This initiative would be relatively open, inclusive and have room for both US and China. Indeed, Beijing’s push for an Asia-Pacific free trade area has been more active since fall 2014 when I predicted that, as a more inclusive and open plan, it had potential to achieve reflect real free trade in the region.

Oddly enough, the Obama Administration rejected the free-trade FTAAP for the geopolitical TPP, which China argued would have imposed a Cold-War like Iron Curtain on Asia Pacific by splitting the region between a US-dominated block and China’s allies.

Today, APEC’s membership has almost doubled to 21 countries, which account for almost 60% of the world economy, and nearly 50% of world trade. Beijing’s logic is persuasive: if you can make it in APEC, you can make it everywhere.

While the dream of free trade was born in the prosperous West, it will be completed in the emerging East.