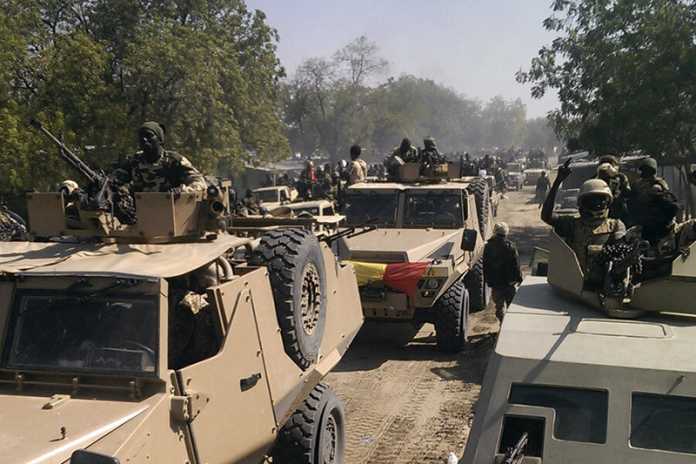 On April 26, Boko Haram (ISWAP) fighters reportedly overran an army base in northeastern Nigeria, killing over 30 soldiers. For people in the Lake Chad Basin region, such an onslaught has become a regular event and hardly garners much interest from the media and the general public. The Lake Chad Basin region, comprising Nigeria, Niger, Chad and Cameroon, has witnessed recurring insurgency since the emergence of the Boko Haram terrorist group.

The terrorists started their attacks against security forces sometime in mid-2010 with hit-and-run tactics at police checkpoints in northeastern Nigeria. The pillion rider would kill the officer on duty and run away with their guns. Today the group has grown bolder and bigger and now engages the military in gun battles.

This year alone, Boko Haram, along with its breakaway group, the Islamic State of West Africa Province (ISWAP), has killed more than 100 soldiers. Between 2015 to date, they have also overrun various fixed sites of battalions and companies in all four countries in the region. In most of their successful attacks, they dealt a double blow on the military – killing officers and men and carting away arms and ammunition. The stolen weapons, especially from the military, have kept the militants in business and make them deadlier by the day.

Much like most terrorist sects, Boko Haram has a knack for inflating its wins against the military, and this makes it difficult to ascertain the true scale and scope of materiel it has stolen. However, some reports show that the group has acquired hundreds of military vehicles, thousands of assault rifles and firearms, millions of rounds of ammunition from the attacks on military bases. It has also netted non-lethal materiel of various kinds, including military uniforms, petrol, and communication gears.

Sometimes, the militants release videos of the stolen weapons and their captives to gloat about their successes and mock the military. While the group’s wanton human right abuses on the civilian and military populations are devastating, its recent arms stockpiling is also of great concern. Already, Boko Haram has killed over 36,000 people since the start of the war and crippled economic activities in many communities in the Lake Chad Basin region, especially northern Nigeria.

About 2.4 million persons have been forcibly displaced by the group and tens of thousands of children orphaned, especially in northeastern Nigeria, the epicentre of the violence. Many of the displaced have found shelter in internally displaced people (IDP) camps in their home country, while some became refugees in other African countries. Unfortunately, the government-run camps, where most of them take abode, are poorly managed. Hunger, congestion, rape and other poor conditions are daily occurrences in these camps. They are also susceptible to terrorist onslaughts, thereby compounding the woes of the already traumatized people. In Nigeria, the militias have overrun IDPs camps on various occasions leading to deaths and abductions. A refugee camp in Niger was also attacked last year. The protracted fight has exacerbated the refugee crises in the continent.

Morale in military camps is also reportedly low, as there have been cases of mutiny and desertion from war fronts, owing to the incessant attacks by Boko Haram. Trust of security agencies among civilians is also at its lowest ebb, as the military appears to be helpless, and the extremists seem to have better knowledge of the local terrain than the security operatives.

The crisis also has financial implications. For example, the Nigerian government spends about 20 per cent of its annual budget on security, leaving other important sectors, such as education and healthcare, underfunded. Despite the increased military spending, the crises seem to worsen by the day. This has raised suspicions of internal sabotage by some military and political leaders in the region. Of course, it will be baseless to begrudge those with such views, given the high success rate the militants enjoy and the frequency of their attacks in recent time.

With the cache of weapons in Boko Haram’s camp, the decade long war could be prolonged for far longer than anyone can possibly imagine – signalling more devastations in the region. Nigeria recently named the third most affected country by terrorism, mainly as a result of Boko Haram and other armed sects in northern Nigeria. If the attacks continue unchecked, the unrest could worsen and spread to other countries on the continent.

It is therefore imperative that the political and military leaders in the region reassess their current efforts and be more proactive rather than reactive. Boko Haram constitutes a monster that must be neutralized with immediate effect, and stopping its growing arms stockpiling should top the agenda towards achieving that.