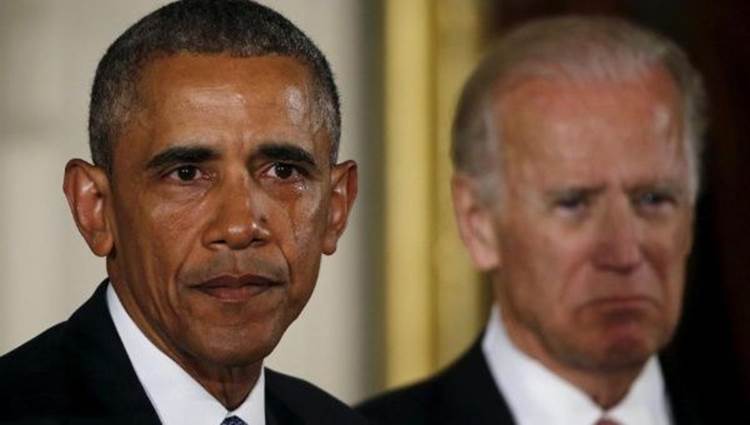 Instead of celebrating the unity of all those who joined to put him in office, the mood was downbeat, with Obama warning listeners that the country had become more divided than ever during his intervening years in office, that democracy was threatened on many fronts – cultural, legal, and economic – and that the people to whom he was speaking, and throughout the United States, now had the task to take up the fight to protect what’s left and restore it, for clearly, he had not been able to do so.

At times the fire of hope, dominant in his 2008 victory speech, briefly returned. Obama declared, referring to 2008 and 2012, that “maybe you still can’t believe we pulled this whole thing off”. But what exactly was pulled off? What was accomplished that was so great is hard to know. But he apparently thinks something was.

During the speech he listed a series of accomplishments that represent, in his view, the high marks of his presidency: As he put it, he “reversed the Great Recession, rebooted the auto industry, generated the longest job creation period in US economic history, got 20 million people health insurance coverage, halved US dependency on foreign oil, negotiated the Iran nuclear proliferation deal, killed Osama Bin Laden, prevented foreign terrorist attacks on the U.S. homeland, ended torture, passed laws to protect citizens from surveillance, and worked to close GITMO.”

Sounds good, unless one considers the facts behind the “hurrah for me” claims.

The auto industry was rescued, true, but auto workers wages and benefits are less today than in 2008 and jobs in the industry are still below 2008 levels. So, too, are higher paid construction jobs. Half of the jobs created since 2008 include those lost in 2008-2010, and the rest of the net gains in new jobs since 2010 have been low-paid, no benefits, part-time, temp/“gig” service jobs that leave no fewer than 40 percent of young workers under 30 today forced to live at home with parents. More people are working two and three part-time jobs than ever before. Five million have left the workforce altogether, which doesn’t get counted in the official employment and unemployment rate figures. If one counts part-time workers, temps and those who’ve left the labor force or not entered altogether, the jobless rate is not today’s official 4.9 percent but 10 percent of the workforce. That’s 15 million or more still, and after eight years. Meanwhile, those who do have jobs are victims of the great “job churn”, from high to lower wage, from a few, if any, benefits to none at all.

As for ending the Great Recession, the question raised is for whom it ended and what constitutes an end. The US economy grew after 2009, but at the slowest rate of growth historically, post-recession, since the 1930s.

But he did end the great recession for the wealthy and their corporations. Corporations have distributed more than US$5 trillion in stock buybacks and dividends to their shareholders since 2010, as corporate profits more than doubled, as stock and bond markets tripled in value, and as more than US$6 trillion in new tax cuts for corporations and investors (beyond the US$3.5 trillion George W. Bush provided) were passed on Obama’s watch. Not to be outdone by Obama and the Democrats, Trump and the Republican Congress are now about to pass another US$6.2 trillion for investors and businesses, to be paid for in large part by tax hikes for the rest of us and the slashing of education spending, Medicare, Medicaid, health care, housing, and what’s left of the U.S. social safety net.

In foreign policy, he noted he signed the Iran deal, but left out mentioning that during his administration the US set the entire Middle East aflame with failed policy responses to the Arab Spring.

In his farewell address, Obama also cited how the country “halved its dependency on foreign oil”. True enough, at the cost of environmental disasters from Texas to the Dakotas to Pennsylvania, as oil fracking replaced Saudi sources, in the process generating irreversible water and air contamination in the U.S. In foreign policy, he noted he signed the Iran deal, but left out mentioning that during his administration the U.S. set the entire Middle East aflame with failed policy responses to the Arab Spring, with Hillary’s coup in Libya, to support of various terrorist groups (including al-Qaida) in Syria and to the arming of the Saudis to attack Yemen.

Looking farther east, Obama’s foreign policy outcomes are no better. The US is still fighting in Afghanistan 16 years later – the longest war in US history – as the Afghan government now collapses again in a cesspool of corruption and graft. And the US is still engaged in Iraq. A related consequence of the failed U.S. Middle East policy has been the destabilisation of Europe with mass refugee migrations that have been only temporarily suspended by equally massive payoffs to Turkey’s proto-fascist Erdogan government (which also blames the U.S. for the recent failed coup there, by the way).

Other failures on the Obama foreign policy front must include the US militarisation of the Baltic states and Eastern Europe following Obama’s inability to rein in Hillary’s US State Department neocons in 2013-14, who made a mess out of their US-financed coup in the Ukraine in 2014. That debacle has driven the US and Russia further toward confrontation, which perhaps Hillary and the neocons may have wanted in the first place (along with a US land invasion of Syria at the time which, in this case, Obama to his credit resisted).