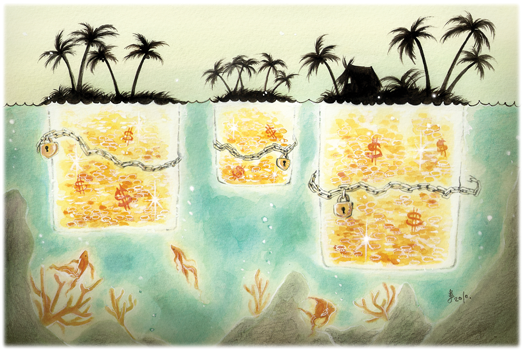 Tax havens have existed since early twentieth century, and are used primarily, but not exclusively, for tax evasion and avoidance. Tax havens are used, however, for other purposes as well. Since the early 1960s, all the premier tax havens of the world have developed financial centres known otherwise as Offshore Financial Centres (OFCs). It is estimated that about a quarter of all international lending and deposits originate in these OFCs. The Bank of International Settlements (BIS) statistics of international assets and liabilities ranks the Cayman Islands as the fourth largest international financial centre in the world, while other well- known tax havens/OFCs such as Switzerland (7th), the Netherlands (8th), Ireland (9th), Singapore (10th), Luxembourg (11th), Bahamas (15th) and Jersey (19th).

In light of such staggering statistics, and the opacity that surrounds tax havens, the question that is asked perhaps not often enough concerns the link between OFCs and the financial crisis. Surprising as it may sound, to the best of my knowledge, there has never been any systematic analysis of the role played by OFCs in the crisis, certainly not by independent academics. This has resulted in some very odd schizophrenic debate. On the one hand, quasi-official research bodies claim that tax havens contributed little to the severity of the crisis. At the same time, OFCs are strongly implicated in nearly every aspect of the still unfolding financial crisis. The G-20 London communiqué of May 2009 devotes an entire section to tax havens, explicitly linking for the first time tax havens with financial instability. Not content with that, France and Germany scheduled a special meeting in June last year to coordinate their efforts in the fight against tax havens. Meanwhile, Gordon Brown sent a series of strong worded letters to British-held OFCs urging them to meet international standards on tax transparency. Why then is pressure mounting on OFCs if the same official bodies claim they have contributed little to the crisis?