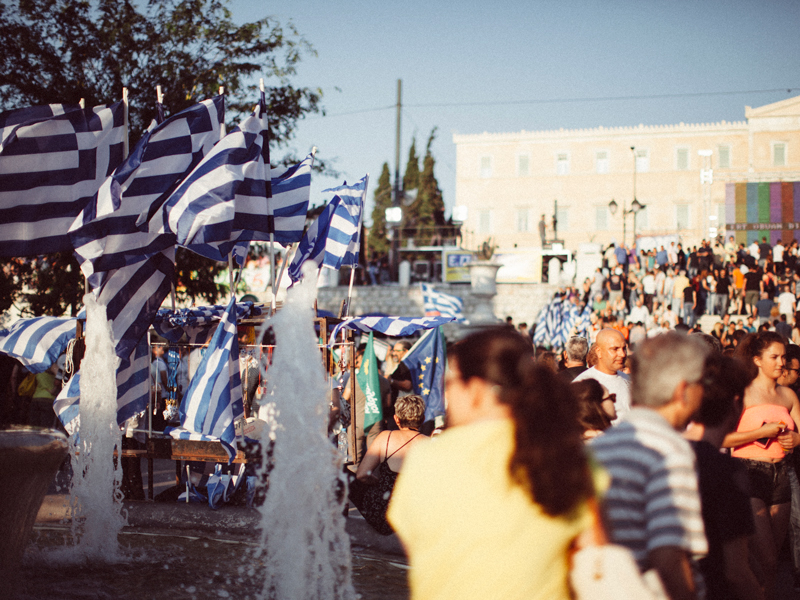 Almost as soon as the Greek deal was agreed, it began to come apart at the seams. Passage of the necessary legislation through the Greek parliament led to Syriza splitting in two as Alexis Tsipras, the Greek prime minister, drew on the votes of the right to force through a deal which is worse than anything that was on offer before the referendum on July 5.

Germany’s finance minister, Wolfgang Schäuble, revealed that many in the German government actually want Greece to leave the euro, effectively admitting that the deal was deliberately designed to be as tough as possible to force Tsipras to reject it. The deal’s passage through the German parliament will not be straightforward, and Finnish politicians have also expressed deep scepticism.

Meanwhile, the International Monetary Fund (IMF) has been engaging in a propaganda battle against its European partners in the Troika, leaking a memorandum in which it argues that Greece’s debt is unsustainable and implying that the agreement will fail.

Loss of Sovereignty
In forming the eurozone, the core member states of the EU gave up at a stroke much of the economic policy autonomy that they had enjoyed in the past. The euro implied stringent (though not easily enforceable) rules on government borrowing, the hollowing out of national central banks, and as a result, the pooling of monetary policy decisions.

During the benign economic times of the first few years of the euro’s existence, this loss of national sovereignty appeared to have few obvious costs, and in any case the mainstream political parties in the member states were fully committed to the single currency and the institutions that sustained it. But the global financial crisis wrecked that illusion, and the choice to opt for fiscal austerity and a conservative approach to monetary policy has had dramatic consequences for the weaker economies of the European periphery.

Greece has been the prime victim of this crisis. The new government led by Tsipras demanded an end to the tough austerity measures imposed by its creditors – the IMF, the European Central Bank and the European Commission – in exchange for financial help to the heavily indebted Greek state.

But fatally, Tsipras, as it now appears, had no fallback strategy: what if the other European nations said no? Syriza aimed to renegotiate the terms of the financial assistance provided by the EU and the IMF, without having any credible bargaining counters. The hardline Schäuble simply called Tsipras’s bluff, and faced with the alternative of a chaotic exit from the euro, a humiliated Greece fell into line with a programme that is even harsher than the original bailout Syriza was seeking to overturn.

Echoes in Southern Europe
There is a little doubt that in their diplomatic game with Greece, the hardliners were playing a longer game. This autumn, elections will be held in Spain, where the new left populist party Podemos has quickly risen from nowhere to challenge the pro-euro orthodoxy.

In Italy, Beppe Grillo’s Five Star Movement has called for a referendum on Italy’s euro membership, and commands the support of more than 20% of Italian voters. In France, far-right Front National leader Marine Le Pen is openly hostile to the euro.

It has now become clear that the European Union institutions cannot, and will not, accommodate the election of governments opposed to current eurozone policy.

Concessions to Syriza would have helped the cause of these various anti-austerity parties in their respective national electoral arenas. But after Syriza’s abject humiliation, Spain’s conservative leader Mariano Rajoy, and also his Socialist opponent Pedro Sánchez, will enthusiastically point to the Greek disaster as an example of the dangers of seductive ideas of debt relief and euro exit, undercutting Podemos’ appeal.

This may well work as a short-term political strategy: the Greek debacle is enough to put anyone off the idea of challenging EU orthodoxy. Spain’s return to timid growth will allow Rajoy to claim that austerity and reform works in the end, while a left populist government would plunge the country into chaos with capital controls, empty shops and shortages of essential commodities. It may not be enough to save Rajoy’s own government, but it should ensure that Podemos can be marginalised by some form of minority government led by either the conservative Popular Party or the Socialists, maybe with the help of the new pro-euro centre-right party Ciudadanos.

Bitter Medicine
But what of the longer term consequences of the Schäuble method for dealing with recalcitrant debtors? It has now become clear that the European Union institutions cannot, and will not, accommodate the election of governments opposed to current eurozone policy. Not only will no concessions be made, but difficult governments will be punished for their insubordination, as Syriza has been.

The evidence that these reforms will actually promote growth in Greece is conspicuous by its absence: to my knowledge, nobody in the Troika has come up with a precise estimate of the likely contribution to GDP of the liberalisation of the bakery sector (one of the measures contained in the agreement), or Sunday retail opening hours (a measure still resisted in Germany itself). Given that the economic consequences of privatisation and deregulation are a matter of some dispute in the research literature, the imposition of these reforms by administrative fiat subverts democracy to a remarkable degree.

If the reforms fail, who will be held accountable? Certainly not the people who designed them. Whatever happens, Greece can be accused of not going far enough, as indeed it has over fiscal policy, despite undergoing a much greater fiscal squeeze than any other member state.

The destruction of democratic decision-making in Greece may indeed be the result of the country’s own past mistakes, but even so, it takes the European Union to an entirely new scenario, in which economic policy is now the exclusive preserve of EU officials who have no direct interest in the success of the Greek economy.

Indeed, the emphasis on how “tough” the required measures are hints that the unpleasantness of the medicine is rather more important than the efficacy of the cure. The Schäuble method means that to remain in the euro is to subscribe to policies decided by the most powerful creditor nation. Financial assistance must be met with gratitude and accepted without any discussion of its terms.

It now appears to be the view among European elites that capitalism can manage better without democracy.

The designers of the institutions of European Monetary Union and the key decision-makers within those institutions have presided over the worst period of economic management on the continent since World War II. Is a further stripping away of democratic controls over these decisions really the best way to return to growth?

Democracy was ultimately successful across the European continent because it proved an effective way of securing the social order necessary for capitalism to function. It now appears to be the view among European elites that capitalism can manage better without democracy. The next few years will show whether the electorates of struggling nations are prepared to acquiesce.

The article was first published in The Conversation: http://www.theconversation.com/uk


Go to top
About the Author
Jonathan Hopkin is Associate Professor of Comparative Politics at London School of Economics and Political Science. He held lectureships at the Universities of Bradford, Durham and Birmingham before joining LSE in 2004. He has held various visiting positions in Spain, Italy and the United States, and is also an Associate Fellow of the Johns Hopkins University Bologna Center in Italy. He is the author of Party Formation and Democratic Transition in Spain (Macmillan 1999). His current research focuses on the emergence of party cartels in advanced democracies, and the relationship of partisan politics to income inequality and welfare state change.