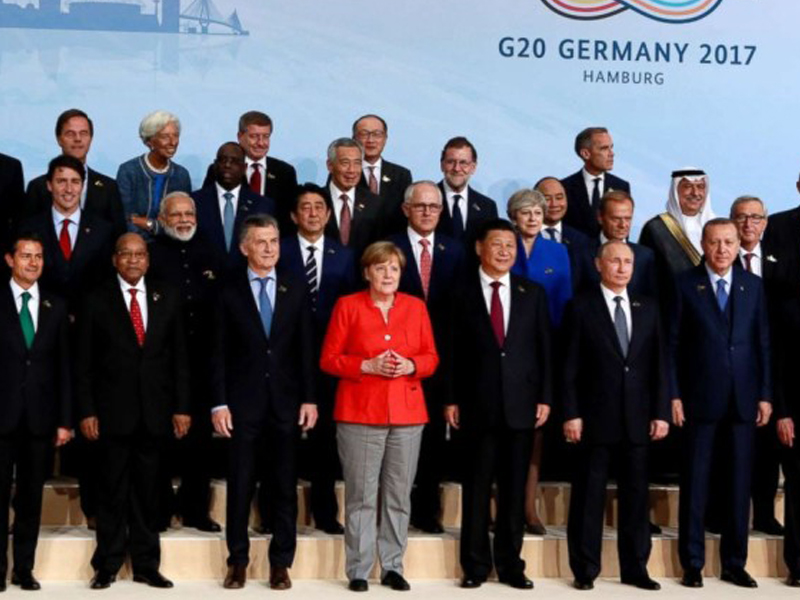 In this article, the author elaborates on the contentious first agenda of the recently held G20 summit at Hamburg, Germany. In a world where the Masters fom the West have created, funded, and armed these “terrorist” groups, how could they plan to fight it, too? Peter Koenig boldly predicts, it’s just a matter of time before the West completes its suicide.

“Welcome to Hell!” is the slogan with which G20 protesters greet the self-appointed leaders of the world to their summit on 7 and 8 July 2017 in Hamburg, Germany, under Madame Merkel’s auspices to discuss the calamities of our globe and how to resolve them. Never mind that the distress of Mother Earth has been mostly caused by those who represent the West, and now pretend to fix it.

How utterly arrogant – and hypocritical!

In the wake of the summit, police were beating on aggressively against the demonstrators, most of them peaceful, unarmed; but some of them violent and hooded, as old tradition dictates, so they will not be recognised as police themselves or patsies of the police. Many people were hurt, several to the point of hospitalisation. And the meeting just began.

At the onset of the summit, Donald the Trump, the chief-psychopath, is running amok declaring with echo, “America First” – “America First” – trying to justify his decision for the US to quit the Paris Climate Accords. In a cheap attempt to hit Russia under the belt, he offered Europe gas sales, so Europe would no longer be “hostage” to Russia. How arrogant, again. The Donald doesn’t seem to have a clue what he is doing, other than thinking the world is his puppet. By far most Europeans rather buy hydrocarbons from Russia than being in the bloody and ruthless claws of the United States of America – and those dark forces that pull the strings behind Washington.

It remains to be seen to what extent the psychopath-in-chief will have his European, Australian and Canadian vassal-psychopaths lined up and dancing to his tune.

Before the summit, “informal” talks between the odd couple, Donald Trump and Angela Merkel, took place. They apparently focussed on North Korea, Syria, and Ukraine – all countries where the US is intent to destabilise and push for “regime change” – the sort of interference in sovereign nations’ affairs Trump promised during his campaign he would abandon as President. The dark one-eyed Masters didn’t allow it. And he isn’t man enough to stand up for what he was elected. Well, let’s face it – he could lose his job, or worse.

Nobody has elected the G20, nor the G7. “G” stands for Grand or Great. That’s how they see themselves. Everybody takes them for granted, the self-appointed megalos. Nobody seems to question their legitimacy. People only protest against what they stand for. That the G20 are sidelining the official body, the United Nations, is of no concern. Perhaps, because the UN has itself become a puppet of the invisible Masters, manipulated by their executioners, the US of A. So, has any international court that otherwise could hold them accountable for the crimes they committed over the century, or longer and keep committing. The G7, embedded in the G20, are the aggressing driving force for wars, destruction, merciless killing and perpetual chaos.

How hypocritical: you create them, fund them, and you fight them. Lying to the people. How much longer will they swallow the lie?

The G7 – Canada, France, Germany, Italy, Japan, UK and the US – all western nations (Japan follows the western game plan), are also the main creators of terrorism. They fund, feed, train and arm such reputed Islamic terror groups as ISIS/IS, Al Qaeda, Al Nusra – and others that fit the model of their war strategy (sic) of the moment.

Yet, it just emerged – would you believe – that the number one item on the rather fuzzy Hamburg agenda was fighting worldwide terrorism. How hypocritical: you create them, fund them, and you fight them. Lying to the people. How much longer will they swallow the lie?