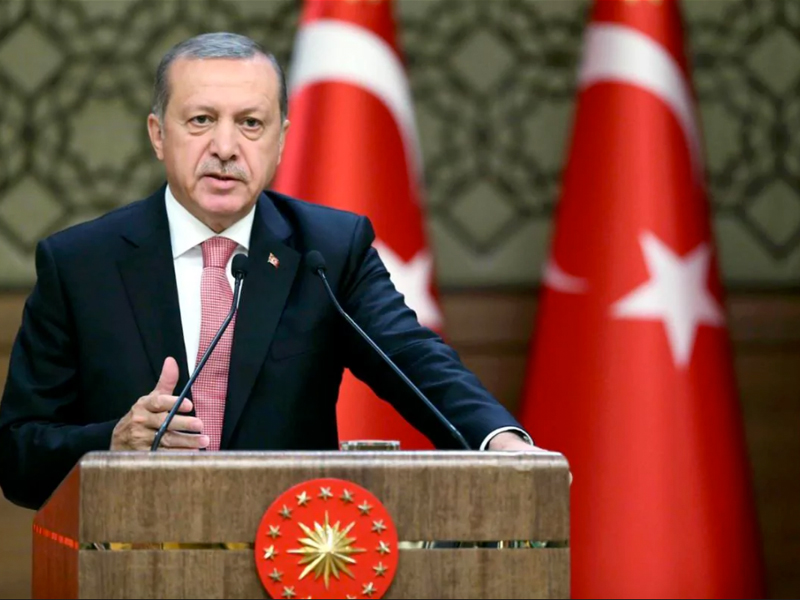 By Volga Can Ozben and Richard Westra

Volga Can Ozben and Richard Westra maintain Turkey under Recep Tayyip Erdoğan as a poster case for the modern state of exception. This is a condition where constitutional and legal provisions in democracies, designed to temporarily empower rulers with absolute authority to defend the state in the face of perceived threats against it, are paradoxically deployed in perpetuity to abrogate both constitutionality and the rule of law in a drive to impose dictatorship beyond law itself.

It was the political theorist Carl Schmitt in his examination of conditions such as those which enabled Hitler’s instituting of Nazi totalitarianism in the ostensibly democratic German Weimar Republic who first touched on the notion of a state of exception. At the time of his writing, when constitutional government and the rule of law were at a nascent stage of development even within the European heartland of democracy, Schmitt essentially conceived of constitutionality as something “decided” by sovereign power which could also decide the “exceptions” to it.1 For Schmitt, democracy was thus saddled with an intractable ambivalence and his own personal turn to support Nazism demonstrated how he believed that problem is best resolved.

With the consolidation of constitutional democracy across Western Europe in the aftermath of the Second World War and the impetus to the spread of democracy throughout the “free world” this engendered, Schmitt’s ideas were largely relegated to specialised debate among a narrow coterie of academic experts in political philosophy. But, following the much dramatised events of 9/11, when a band composed mostly of Saudi Arabian national’s crashed hijacked planes into the World Trade Centre in New York,2 Schmitt’s thinking about democracy would work itself back into the forefront of policy circles. To be sure, significant segments of the global elite in Western democracies had never been completely committed to constitutionality and due process of law and had supported piecemeal legislation promulgated under the political radar to chip away at it. However 9/11 would open the floodgates for what effectively constitutes a “war on liberty” within what ostensibly were the world’s staunchest democracies.3

Quite simply, invoking the state of exception within even those states where constitutional government and the rule of law are perceived to be most entrenched follows not upon any overt imposition of dictatorial power such as occurs with a military coup. Rather, the state of exception resembles, in form, circumstances such as foreign attacks launched against sovereign states, civil war, armed insurrection against the state, and so forth, in response to which democratic constitutions enable executive power in the hands of prime ministers, presidents or chancellors to bypass legislatures, judiciaries and the rule of law itself to meet the “emergency”.4 Crucially, it was always understood to be a cornerstone of constitutionality that to the extent “exceptional” powers are concentrated in the hands of executive authority this would be of limited duration to deal with the immediate “threat”.

Bush’s words effectively sanctioned the position that the world as a whole, led by the United States, had entered a long emergency justifying extraordinary measures where democratic citizens would give up their constitutional protections to preserve “freedom” and brutal authoritarian and apartheid regimes that joined the “war on terrorism” were automatically pencilled onto the roster of the “good”.

But, as exemplified by his address to the nation just two months following 9/11, President George W. Bush of the United States set a new, foreboding tone which would be imbibed with great fervour throughout the democratic world. Bush claimed America and the “freedom” cherishing world were pushed into a new “war to save civilisation”. It was a war against those who “commit evil” waged by the “good”; a “different war” fought on “many fronts”; a “war against terrorists who operate in more than 60 countries”.5 With few critical voices heard amidst the patriotic din, Bush’s words effectively sanctioned the position that the world as a whole, led by the United States, had entered a long emergency justifying extraordinary measures where democratic citizens would give up their constitutional protections to preserve “freedom” and brutal authoritarian and apartheid regimes that joined the “war on terrorism” were automatically pencilled onto the roster of the “good”. This process in turn saw all manner of political opposition groups across the globe “criminalised” and marked as “terrorist organisations”.6

Yet, most insidious in all this, is the way the state of exception invoked within even democratic stalwarts forged a new “paradigm of government”. Therein, the state of exception fastens itself onto the rule of law and constitutionality in order, paradoxically, to suspend both. Through its justifications for infinite detention, rendition of “evil doers” to secret torture sites, denial of habeas corpus, unlimited surveillance of citizenry, secret Star Chamber-like courts, the law is appealed to in order to effectively create “spaces” within democratic societies devoid of law. And, with a “war” and subsequent emergency of unlimited duration and geospatial scope, the constitutionally mandated “exception” becomes the rule which abrogates both constitutionality and the rule of law over wider areas of the erstwhile democratic order.7

Richard Westra is Designated Professor in the Graduate School of Law, Nagoya University, Japan. His most recent books are Unleashing Usury: How Finance Opened the Door to Capitalism Then Swallowed It Whole (Clarity Press, 2016); Exit from Globalization (Routledge, 2015); and The Political Economy of Emerging Markets: Varieties of BRICS in the Age of Global Crises and Austerity (ed.) (Routledge, 2017) https://www.routledge.com/The-Political-Economy-of-Emerging-Markets-Varieties-of-BRICS-in-the-Age/Westra/p/book/9781138121225