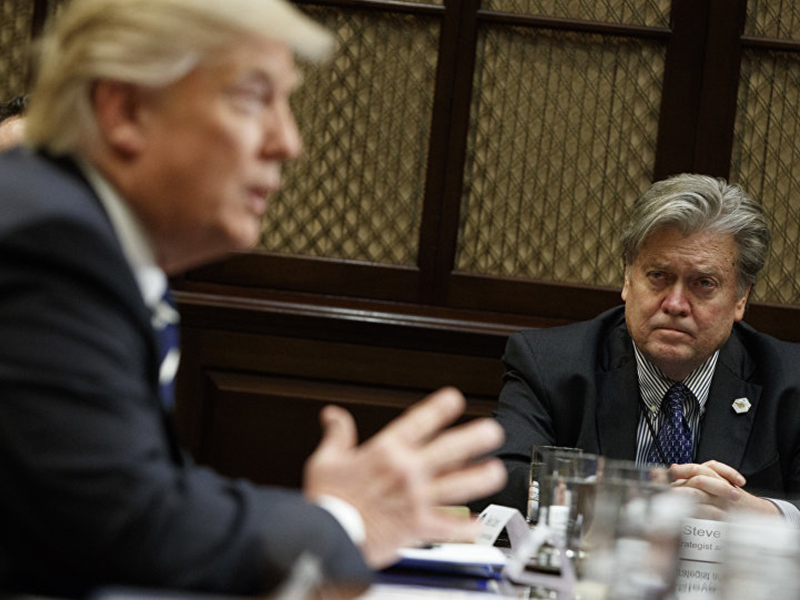 For Russians, Mr. Trump presents at least the chance of a new course in US/Russian relations. Putin hopes to see the US stop its liberal interventionist policies – a position in accord with Mr. Bannon’s. A return to chilled relations will reward Russia and the United States’ respective military-industrial-intelligence complexes.

The central figure in President Donald Trump’s administration is Steve Bannon, but for how long, nobody knows. Mr. Bannon sees the fate of the US in apocalyptic terms. His world view centres on the supposition that the West, or as he sees it, Judeo-Christendom, is locked into a global fight with Islamic fundamentalist terrorism presenting an existential threat to the United States. Two, and related to point one, (but which goes beyond the scope of this essay), is that there exists a ‘real’ capitalism connected to that Judeo-Christendom. This version of capitalism produces broad-based prosperity. According to Bannon, the United States has departed from this model and must return to it or else collapse into the abyss.

Addressing point one, outreach to Russia becomes readily understandable given Mr. Bannon’s outlook. Under Vladimir Putin’s rule, Russia showed no mercy crushing Islamic separatists in Chechnya. The victory was total and spared no destructive power. Indeed, so much artillery fire was rained down on Chechnya that Russia dipped into still existing World War II surplus ordnance to complete the job. Additionally, Putin helped the United States in Afghanistan by providing rail transport corridors through Russia. Moreover, Russian intelligence picked up on the terror threat posed by the Dagestanis that bombed the Boston Marathon in 2013. The United States failed to act on Russia’s intelligence and consequently suffered. Moreover, Bannon sees Russia as a Christian state, while he thinks Europe has gone secular and soft. Mr. Putin indeed sees Russia as Christian, while also emphatically affirming it is a multi-ethnic federated state. This last point is lost on Mr. Banon’s Brietbart, Alt-Right, adherents, but then nuance is not their strength.

For Russians, Mr. Trump presents at least the chance of a new course in US/Russian relations. Putin hopes to see the US stop its liberal interventionist policies .

Then there is Syria. Again, Russia presents its role here as taking the fight to Islamic terrorists. A corridor has opened connecting terrorists in Syria to the Russian Caucasus, a distance of only several hundred kilometres. This makes Russia in Syria a decidedly serious as a player in the fight against terrorism from the perspective of Mr. Bannon. Meanwhile, the US under President Obama’s administration, referenced the need to support Syria’s “moderate Islamic opposition”. Yet, as Obama-era ambassador to Russia, Michael McFaul, noted in an interview last year, “I’m on TV all the time where I have to use the phrase “moderate opposition”, and I don’t know what it means. The President gave a speech yesterday—we’re supporting ‘Syrian forces’ he said, right? Who are they? What are they?” The US complains Russia has not, as promised, fought terrorism in Syria, but merely targeted the enemies of Bashar Al-Assad’s government. For Mr. Putin the realist, this is synonymous with fighting terrorism, as many of Mr. Assad’s enemies are in fact radical Islamists funded by Saudi Wahhabists (who previously funded the Afghani Mujahadeen that eventually morphed into Al-Qaeda). These same forces in Syria are also funded by the Qatari government. The Qataris (Sunni Muslim allies of the Saudis) wish to run a natural gas pipeline to Europe through Syria. Presently, this project is blocked by Assad’s Alawite Shia government that has given the gas pipeline transit contract to their allies, Shia Iran, even if the former is largely a secular government, while the latter is decidedly not so. Assad knows that if his government is toppled, he could meet a fate similar to that of Libya’s Muammar Gaddafi. Mr. Gaddafi’s video recorded end arrived with him being sodomised by a bayonet, while begging not to be shot, which in due course he was. This was immediately followed by an interview with the then US Secretary of State, Hillary Clinton (who advocated for US intervention in Libya) stating, “We came. We saw. He died”, followed by laughter. While one might make the case that Mr. Gaddafi deserved no better end, the manner of his execution was no doubt seen by Mr. Assad. Mr. Putin has reputedly viewed the tape of Gaddafi’s gruesome execution no less than three times. In short, neither of these leaders intends to exit this life in the same manner and suspect that some US policymakers intended to reprise Gaddafi’s fate with Mr. Assad, if not for Mr. Putin. When it comes to relations with Trump, Mr. Putin is looking for another reset, but likely has few illusions about its prospects given the depth of US hostility to him, from both policy makers and opinion makers in the US. Nonetheless, for Russians, Mr. Trump presents at least the chance of a new course in US/Russian relations. Putin hopes to see the US stop its liberal interventionist policies – a position in accord with Mr. Bannon’s – that destabilised North Africa and the Middle East, thus providing space for groups like ISIL to emerge and spreading their influence to Syria

Jeffrey Sommers is Professor of Political Economy & Public and Senior Fellow, Institute of World Affairs of the University of Wisconsin-Milwaukee and Visiting Professor at the Stockholm School of Economics in Riga. His new book new book (with Charles Woolfson), is The Contradictions of Austerity: The Socio-economic Costs of the Neoliberal Baltic Model.