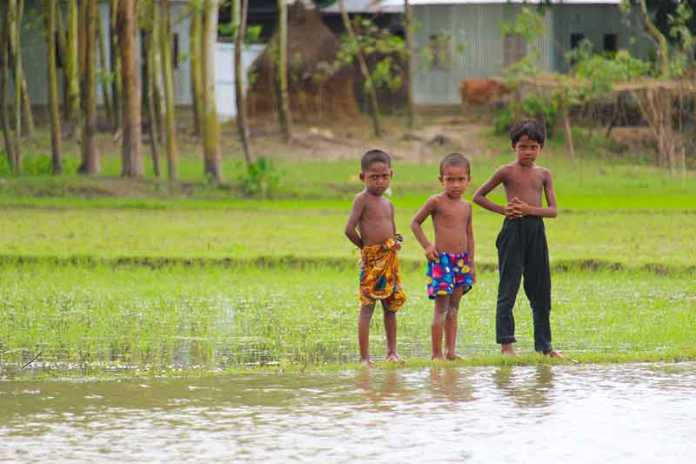 The recent COP26 climate summit in Glasgow served the interests of rich, industrialised nations over those of the poor and climate vulnerable countries. This was another missed opportunity. While most of the countries most vulnerable to climate change sought urgent emission reductions and compensation for damages, their voices were either ignored explicitly or turned away in favour of potential investment deals with rich countries and aligned institutions.

Like many others, we kept our fingers crossed for any realistic progress on emission targets. But the summit only increased our fear that rich governments and corporations will continue to opt for fossil fuel extraction instead of preservation.

Our home nation, Bangladesh, is one of those most vulnerable countries. Two-thirds of it is less than five metres above sea level. Rising seas will instantly displace between one and three million people while many millions more will be hit by stronger cyclones, flooding, failing crops, desertification, droughts and dangerous heatwaves. And all this is despite the fact that, on a per capita basis, Bangladesh is one of the very lowest emitters of greenhouse gases outside of Sub-Saharan Africa.

We spoke with some of Bangladesh’s delegates at the COP26 summit. Based on these conversations and our own expertise, we reveal what matters most for super vulnerable countries like Bangladesh – and how these issues were sidetracked in the negotiation process.

Bangladesh’s position was that major greenhouse gas emitters, mostly developed nations, should commit to financial support for those countries which are at most risk yet will have a much smaller role in the reduction of CO₂ emissions globally.

Much of this money will be required simply to adapt to climate changes that are already locked in. Bangladesh, for instance, needs to fortify its river banks against floods; it needs to conserve soil that is being washed away; it needs high-yield water sensitive crops, and it needs more floating gardens in flooded areas. These adaptations, and many more besides, will cost billions of dollars.

Most vulnerable countries find it difficult to provide these things through internal self-finance. The UN does have an adaptation fund which is reliant on voluntary contributions from developed countries and received US$356 million in pledges at COP26, an increase on the COP25 pledges of US$129 million. But this is still far from enough. Bangladeshi delegates we spoke with warned that the amount needed is growing far faster than the amount available. Indeed, one recent report said adaptation costs in developing countries are ten times greater than the money they currently receive.

One problem is that climate finance is still mostly geared towards mitigation, funding things like solar farms or hydropower plants that might help countries like Bangladesh cut their own emissions. One of the delegates told us that Bangladesh wanted a 50:50 mix of support for adaptation and mitigation.

Bangladesh, like other climate-vulnerable nations, also wanted more grants, rather than loans, which leave them indebted. Instead, with rich countries unwilling to offer the required support, funding was often offered through market-based instruments such as public-private partnerships (PPP).

But this kind of private sector investment is constrained by long term uncertainty or perceived high risks associated with climate change and natural hazards. As one civil society representative of Bangladesh at COP told us, private financing will mainly prioritise business interests and will hardly meet the dire adaptation needs of poor and marginalised people.

According to the IPCC, some impacts of climate change are unavoidable and so serious that things cannot be restored through adaptation. In the language of international climate policy, this is known as “loss and damage”. A good example here is land lost due to salinity and sea level rise, which is already displacing thousands of people in Bangladesh.

This is why super vulnerable countries placed huge emphasis on finding a common tool for addressing loss and damage. There was a proposal at COP26 to create a new fund for loss and damage, but it was blocked by the US and EU.

One Bangladeshi civil society leader observing the negotiations told us that rich nations were more interested in luring the poor countries (through promises of increased aid) to support their agenda of a tokenistic reduction in CO₂ emissions while carrying on business as usual by outsourcing emissions to poorer nations.

There were also visible efforts to introduce market-based approaches such as public-private partnerships, whereby international financial institutions and investment banks would finance “climate-smart infrastructure” in poor countries. Our contacts told us highly-paid consultants were trying to convince delegates and political leaders of the poor countries to agree with this approach. Though Bangladesh does welcome private climate investment, the lack of public funding could mean many urgent-but-not-profitable priorities may be left unaddressed. Our contacts said it was unlikely that those behind the public-private partnerships would be interested in investing in agricultural insurance, for instance.

Though some countries may be desperate enough to sign up, such deals could prove to be a new debt trap. As one civil society leader pointed out:

How would these be aligned with the core objectives of the climate negotiation for the poor countries? It is obvious when private sector will invest, they would first look to make profits.

This article was originally published in The Conversation on 23 December 2021. It can be accessed here: https://theconversation.com/a-climate-vulnerable-countrys-experience-at-a-un-summit-ignored-overlooked-then-targeted-by-investment-banks-171654

Dr Palash Kamruzzaman combines degrees in Sociology and Anthropology and written about international aid and poverty reduction; civil society; participation in development and social policy-making; expertise and aid ethnographies; and Bangladesh’s political economy. His geographical focus is South Asia and Bangladesh in particular.