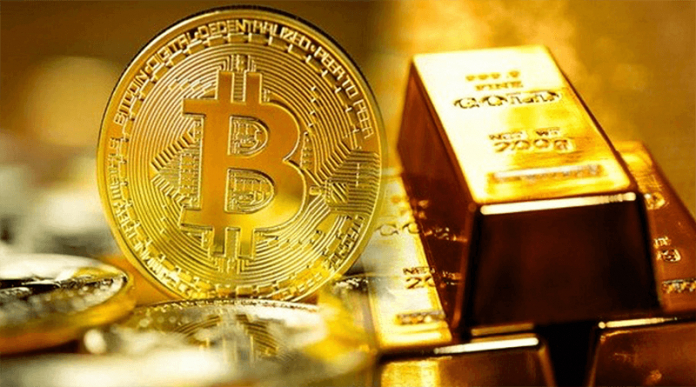 You probably must have heard about the term “gold standard” before. That’s because, for thousands of years, gold was used as a means of exchange, in coins, and as a store of wealth. Every other currency at the time, and many up till today, are measured against gold.

But with the recent meteoric rise of bitcoin, as the crypto hits new highs and crossed the $1 trillion market capitalization mark earlier this year, more investors are beginning to access the longstanding debate between cryptocurrency and gold, which is also a well-known asset class.

Both Bitcoin and gold are often seen as easy ways to diversify a portfolio because of the edge the two have over fiat currency inflation. Until recently, rarely would you see established investors, Wall Street analysts, or chief executives seriously compare the two assets. While Bitcoin has commonly being referred to as digital gold and a perfect investment for those looking to profit in the short term, gold has always been seen as a safe-haven asset.

However, with the recent rapid rise in the price of Bitcoin due to the recent interest of Tesla and other institutional names in the crypto, questions have yet again been to spring up about the two assets. So, the question is, will Bitcoin soon become the new standard over gold?

The Slow Demise of Gold

For many decades, gold has been seen as the official foundation for global currencies. Up until the Second World War, most countries fixed their currency to a specific measure of gold. But this idea received a huge blow during the war in 1944. Then, the global currency standard shifted to the US dollar and all other currencies were priced against it. However, the US dollar itself was still fixed to gold as one ounce of gold exchange for $US35.

But in 1971, the gold standard was abandoned as inflation took hold of the US after the Vietnam War. Nevertheless, gold didn’t completely go out of fashion. Central banks still hold large stores of it, further making gold the bedrock for the financial system. That is one reason investors will always run to it at the first hint of inflation or any economic or political upheaval.

For many reasons, gold deserves its place as an ultimate source of wealth. First, it is attractive. And again, it is incredibly stable – thanks to its molecular structure. Because of that, gold is not only useful for making jewelry but also useful for making high-level industrial applications such as electronics.

Well, looking at the two, one would find lots of similarities that connect them. The two assets are rare – not commonly found like other fiat currencies. In fact, there are only about 21 million tokens of Bitcoin that can ever be mined and be in circulation. And with the rate at which the coins are released, the total supply mark might not be reached until around 2140.

However, unlike gold, Bitcoin is virtual and so doesn’t exist physically neither can it be used other than as a means of exchange. Bitcoin is also a decentralized system, which means it cannot be controlled or manipulated by any authority or government.

Being backed by blockchain technology, Bitcoin has laid the path for many new cryptocurrencies that do more than just being a means of exchange. These cryptos have found amazing use cases in different sectors of life, including the healthcare industry, for voting, in cars, and different financial services.

On the other hand, gold has been on the decline lately – since August 2020. Even the recent fall in the global bond market couldn’t help it get back to its feet.

So, looking at the recent happenings in the crypto world, one might want to conclude that cryptocurrencies will soon become the new standard, replacing gold as the ultimate store of wealth. However, the volatility and risks associated with cryptocurrency are other important factors to consider. Nevertheless, we may be closer to the era of having a new standard anyway, which will be Bitcoin.

What Do Experts Say About This?

There have been mixed feelings about this topic among financial experts across the globe. While some said they would prefer to buy Bitcoin and hold it for the next 10 years, others said they would rather go for gold. Let’s see some of these thoughts:

David Rosenberg is the former Chief Economist and Strategist for Merril Lynch Canada and Merrill Lynch in New York, and he is casting his support for gold. He said he would rather buy gold because of its thousands of years of historical record as a store of value. “Gold also has less volatility – about one-fifth of Bitcoin and doesn’t face the same competition risk,” says David.

This is the present president and CEO of Hecla Mining Company. He also casts his lot for the precious metal. Baker also agrees with the points of David Rosenberg. He said, “Gold has been a reliable medium of exchange and store of value for at least 4 millennia, compared to Bitcoin.

Although there is room for cryptos too since they have a different fundamental – digital nature. But that characteristic is another important factor pointing to the fact that Bitcoin will never replace gold.”

This is the CEO of Pompliano of Morgan Creek Digital Assets and Pomp Investments. He believes Bitcoin will do better as the new standard than gold. He said Bitcoin has about 100 times more improvement over gold as a store of value.

“With the new developments in the crypto world, Bitcoin is likely going to be appreciating in US dollar terms over the coming years. I also suspect that the market cap of bitcoin will soon surpass that of gold. Because of that, I would rather buy Bitcoin than gold and keep it for the next 10 years.

The Managing Director and Senior Equity Research Analyst at Wedbush Securities, Daniel Ives also supports Bitcoin. He calls it digital gold and proposed it is going to be a mainstream asset class in the nearest future. “Although gold presently has clear value and safety than Bitcoin, the reverse might happen soon if the digital currency could stay on its current course over the next decade.”

Pavel is the CEO of Wirex. In his words, he said, “Although the two assets are both used as a means of diversifying and holding a range of assets, they are quite different in many ways. Bitcoin can be easily traded on platforms, and many giants across the globe such as Tesla are presently taking an active in promoting it.

This is a modern economy and the liquidity, ease of exchange, and wider use of Bitcoin will make a huge difference when comparing it with gold. While gold is designed mainly to just hold value, Bitcoin and other cryptocurrencies can be used for several purposes.”