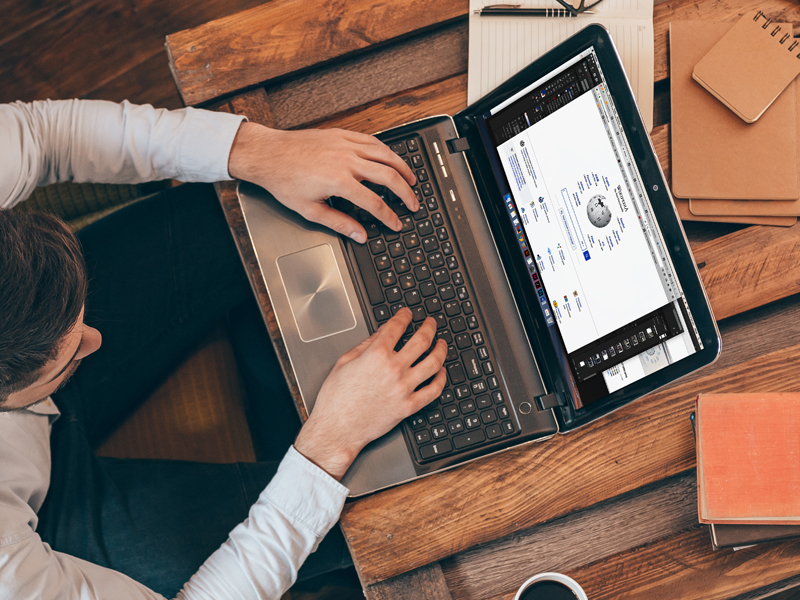 A rationale for protecting freedom of expression that ranks among the most cited is the truth-seeking rationale. According to this rationale, information and opinion should circulate free of government controls. The sanguine conclusion is that truth, or at least the best ideas, will prevail in the end. The evidence for this sweeping conclusion is limited and disputable, as this article demonstrates. Given the paucity of solid evidence from other contexts, this article suggests that Wikipedia can serve as an illustration of how relatively unfettered expression can lead to the best content prevailing, at least in some circumstances.

Despite the limited evidence for it, citations of three famous sources of the truth-seeking rationale are frequent. An early expression of the rationale is from English poet John Milton’s Areopagitica (1644), his defense of free speech, in which he uses a metaphor of Truth and Falsehood wrestling and Truth winning in a fair match.1 Areopagitica has been cited 478 times in law review articles published since 1982 that are available in LexisNexis Academic; there are also 49 citations of it in federal and state cases available in the LexisNexis database from throughout United States legal history.2 Another source for the rationale is English philosopher John Stuart Mill’s On Liberty (1859), in which he advanced the argument that truth will prevail and that a side effect of the struggle to identify the truth is that participants in the debate, and those in the audience, may gain a keener appreciation of the truth that finally emerges. A search for citations of Mill’s On Liberty and “free speech” returns 1,683 hits from law reviews and 65 hits from the US cases since Mill’s publication of the work.3 Justice Oliver Wendell Holmes is often cited for the view the truth would prevail in the “marketplace of ideas”, though Holmes did not actually use the exact phrase, but instead words with similar meaning: “[T]he best test of truth is the power of the thought to get itself accepted in the competition of the market.”4 A LexisNexis search for “Holmes” and “marketplace of ideas” yields 2,979 hits in law reviews and 193 hits in cases.

In the sentence after Holmes advanced this “marketplace of ideas” rationale, he wrote that it “is the theory of our Constitution. It is an experiment, as all life is an experiment. Every year, if not every day, we have to wager our salvation upon some prophecy based upon imperfect knowledge.”5 Is the rationale merely a prophecy? What are the results of the ongoing experiment? What evidence can one cite of the free marketplace of ideas actually creating conditions in which the best ideas prevail? We shall discuss national comparisons and a famous study of the incidence of famine in liberal democracies.  Though the illustration is imperfect, we argue that analysing Wikipedia as a contemporary example of a well-functioning free market of ideas is preferable to making a statement, on blind faith, that truth emerges.

One might say that the truth-seeking rationale is being tested regularly, if one contrasts debates in societies that enjoy more freedom of speech with others. In free societies, does truth displace falsehood? If we simply look at the national level, there are too many confounding variables to make comparisons rigorously. The most difficult question is how to assess the outcome variables: How does one choose the variables to examine to assess which ideas are true (or best) and whether they have prevailed? A less complex but real concern is assessing the level of freedom of expression in nations; ratings and rankings of organisations like Reporters Without Borders and Freedom House are fraught with controversy for being subjective, biased, or imprecise.6

Free expression is a factor that facilitates discovery of better arrangements for distributing basic resources; the best ideas prevail, at least in this very narrow context.

Limited evidence supporting the rationale comes from Amartya Sen, the Nobel Prize winning economist, who found that there has never been famine – widespread hunger that results in part from human error – in a functioning democracy with a free press.7 He suggested this correlation is not spurious, but may actually be a result of causation. Sen suggests that in free societies, citizens and the press take the steps necessary to intervene in the sequence of missteps that results in famine. Free expression is a factor that facilitates discovery of better arrangements for distributing basic resources; the best ideas prevail, at least in this very narrow context.

Despite the weakness of the evidence for it, the truth-seeking rationale has become something of a cliché in free societies. The rationale has its detractors, however, such as legal scholar Alexander Bickel, who wrote, “[W]e have lived through too much to believe it”, for one must ask “whether our experience has not taught us that even such ideas [as proletarian dictatorship, segregation, or genocide] can get themselves accepted” in the marketplace of ideas.8 Legal scholar Lee Bollinger wrote that if truth emerges in the long run, it may be too late for many who suffer through the process.9 “Market failure” theorists point out that just as entirely free markets sometimes fail to produce the best outcomes and can benefit from government regulation, the marketplace of ideas can fail: lack of economic resources can prevent some from participating in debates that are controlled by wealthy media owners and dominated by voices backed by big promotional budgets.10 Sceptics of the truth-seeking rationale abound; the founding Prime Minister of Singapore, Lee Kuan Yew, was among those who emphasised that freedom of expression would lead to “a mess” unless people were sufficiently educated for a well-informed, rational debate: “This free-for-all, this notion that all ideas should contend and there will be blinding light out of which you will see the truth – ha!”11

Mark Cenite is Associate Chair (Academic) at the Wee Kim Wee School of Communication & Information, part of Nanyang Technological University in Singapore. He has a law degree from Stanford Law School and a PhD in Communication from the University of Minnesota. He is a winner of multiple awards for teaching Law in Singapore, and has also taught Law in the United States and Hong Kong.

1. “And though all the windes of doctrin were let loose to play upon the earth, so Truth be in the field, we do injuriously, by licencing and prohibiting to misdoubt her strength. Let her and Falshood grapple; who ever knew Truth put to the wors, in a free and open encounter.” John Milton, Areopagitica(1644).
2. Results reported here were from searches conducted on 19 September 2016 in the LexisNexis database in the category “US Law Reviews and Journals” from all available dates (since 1982), and in the category “US Federal & State Cases” from all available dates. The search term used was simply the title “Areopagitica.”
3. The search terms were “Mill” within 5 words (/5) of “On Liberty” and the term “free speech”.
4. Abrams v. United States, 250 U.S. 616, 630 (1919) (Holmes, J., dissenting).
5. Abrams, 250 U.S. 616, 630 (Holmes, J., dissenting).
6. Reporters Without Borders is available at https://rsf.org; Freedom House is available at https://freedomhouse.org. A podcast criticising the methodology of Reporters Without Borders is Bob Garfield’s interview with Max Fisher, “No, US press freedom is not in dire decline,” WNYC’s On The Media, Feb. 14, 2014, at http://www.wnyc.org/story/press-freedom-not-decline
7. Amartya Sen, Development as Freedom(1999).
8. Alexander Bickel, The Morality of Consent71, 76-77 (1975).
9. Lee C. Bollinger, The Tolerant Society74 (1986).
10. Jerome A. Barron, Access to the Press: A New First Amendment Right, 80 Harv. L. Rev. 1641-1678 (1967).
11. “Intellectual Free-For-All Not for the Masses, Says SM Lee,” Business Times (Singapore) (Oct. 6, 1995).
12. See Alexa Internet, http://www.alexa.com
13. “Wikipedia: Rules,” https://simple.wikipedia.org/wiki/Wikipedia:Rules
14. “Wikipedia: Neutral point of view,” https://simple.wikipedia.org/wiki/Wikipedia:Neutral_point_of_view
15. “Wikipedia: Tagging pages for problems,” https://en.wikipedia.org/wiki/Wikipedia:Tagging_pages_for_problems
16. “Wikipedia: Edit War,” https://simple.wikipedia.org/wiki/Wikipedia:Edit_war
17. “Wikipedia: Vandalism,” https://simple.wikipedia.org/wiki/Wikipedia:Vandalism
18. “Will Wikipedia Mean the End Of Traditional Encyclopedias?” The Wall Street Journal (Sept. 12, 2006).
19. Thomas I. Emerson, The Doctrine of Prior Restraint, 20 Law and Contemporary Problems648-671 (1955), at: http://scholarship.law.duke.edu/lcp/vol20/iss4/10
20. Wikimedia reports that Wikipedia received 243 requests to take down content from January through June of 2016 and none were granted. See https://transparency.wikimedia.org/content.html
21. There are some caveats to the argument that Wikipedia is free of government control, for authorities can of course punish contributors in their jurisdictions, and nations including China block Wikipedia, thus blocking not only readers but contributors. See Jimmy Wales, “State of the Wiki: Free Expression and Wikipedia,” speech at Wikimania 2015, at https://www.youtube.com/watch?v=6p50HVv1rU4
22. Jim Giles, Internet Encyclopaedias Go Head to Head, 438 Nature900-901 (15 December 2005).
23. Imogen Casebourne, Chris Davies, Michelle Fernandes, & Naomi Norman (2012), Assessing the Accuracy and Quality of Wikipedia Entries Compared to Popular Online Encyclopaedias: A Comparative Preliminary Study across Disciplines in English, Spanish and Arabic. Retrieved from: http://commons.wikimedia.org/wiki/File:EPIC_Oxford_report.pdf
24. Malolan S. Rajagopalan, Vineet K. Khanna, Yaacov Leiter, Meghan Stott, Timothy N. Showalter, Adam P. Dicker & Yaacov R. Lawrence, Patient-Oriented Cancer Information on the Internet: A Comparison of Wikipedia and a Professionally Maintained Database. 7 Journal of Oncology Practice 319-323 (2011), at http://www.jop.ascopubs.org/content/7/5/319.full