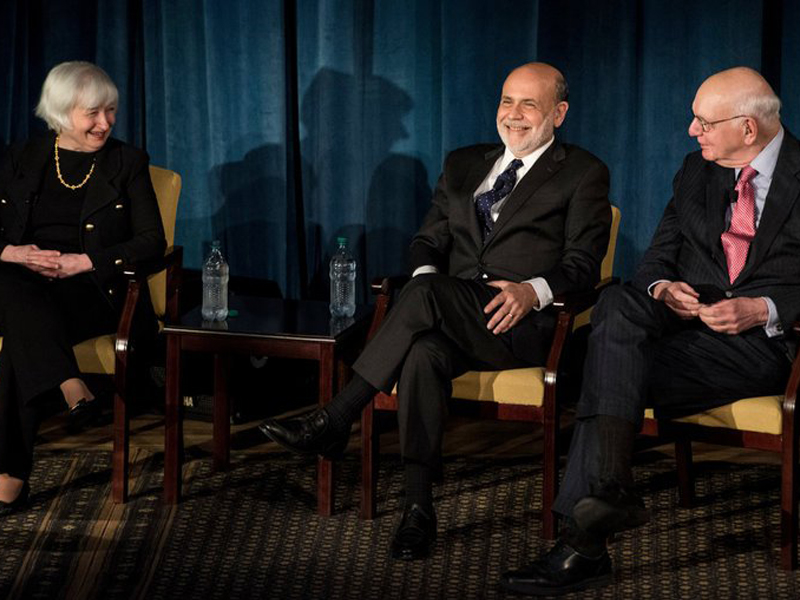 Janet Yellen’s term is ending at the Federal Reserve. With new appointments, President Trump can indirectly shape US monetary policy for years to come – for better or worse.

Serving as the “epitome of calm”, Fed chief Ben Bernanke responded to the global financial crisis by cutting the federal funds rate to zero and initiating rounds of quantitative easing (QE) soon thereafter.

When Janet Yellen replaced Bernanke in 2014, US economy had begun the exit from zero-interest-policy-rates (ZIRP) but not balance sheet normalisation.

As Yellen’s term will end on February 2018, President Trump will soon select the next Fed chief and several new members of the Fed Board. Consequently, Trump will indirectly shape US monetary policies for years to come.

Not surprisingly, Trump has been assisted by Vice President Mike Pence, who has met with outside advisers – including Heritage Foundation economist Steve Moore, conservative economist Larry Kudlow and former President Ronald Reagan economic adviser Art Laffer – to assess the criteria for the next Fed leader.

Trump’s current shortlist features half a dozen viable candidates. In line with his “America First” approach, Trump is likely to ignore the international implications of the next Fed chief. Nor has he any interest in the Phillips curve that has influenced Yellen’s monetary stance.

Instead, Trump is likely to choose a candidate that will not prove too independent and who will prioritise Main Street, not Wall Street – and one that will support his proposed fiscal expansion.

Both Yellen and Bernanke are academic experts of the Great Depression. As a Keynesian economist and monetary dove, Yellen has been cautious with the pace of normalisation. The Fed shortlist features several Wall Street insiders who have been seen as frontrunners. Such assessments underestimate Trump’s suspicions about Wall Street.

Kevin Warsh is a “hard money hawk” with close ties to Wall Street. Married with the $2 billion heiress Jane Lauder, his father-in-law is Ronald Lauder, a longtime friend of Trump. After serving as Morgan Stanley’s M&A executive, Warsh was President Bush’s director of the National Economic Council. At just 35 years old, he became the youngest appointment in the Fed.

Like Greenspan, Warsh is an ultimate free-market advocate. In 2007, less than a year before the rescue of Bear Stearns, he argued that financial innovation made the system safer. During and after the 2008 crisis, Warsh served as a governor of the Fed and its primary liaison to Wall Street. As US economy fell into deflation, he kept predicting that inflation would rise.

More recently, Trump met Stanford’s John B. Taylor, an accomplished academic of monetary economics. Taylor believes that the global crisis was caused by flawed macroeconomic policies in the US and elsewhere. Under Alan Greenspan, the Fed created “monetary excesses”. Interest rates were kept too low for too long, which led to the housing boom.

Unlike Bernanke and Yellen, Taylor has long cautioned the Fed should move away from quantitative easing measures and opt for a more stable monetary policy. If Warsh is a monetary hawk, Taylor is a monetary conservative.

Gary Cohn is Trump’s Director of the National Economic Council and his chief economic advisor. Unlike Warsh and Powell, Cohn is a registered Democrat. As former president and COO of Goldman Sachs, he is considered aggressive and arrogant. But unlike his rivals, he supports reinstating the Glass-Steagall legislation, which would separate commercial and investment banking.

After law school, Fed governor Jerome Powell worked as an associate for an investment bank and private equity giant Carlyle Group. He served as an assistant secretary and undersecretary of the Treasury under President George H.W. Bush.

Unlike his rivals, Powell is not a PhD-trained economist, but his grasp of monetary economics is highly regarded. He has solid Republican credentials and is seen to represent institutional continuity. He is believed to be Treasury Secretary Steven Mnuchin’s preferred candidate and Trump’s current favourite. Unlike Warsh or Taylor, Powell believes in a more dovish monetary stance.

Trump could also opt for the incumbent Fed chief Janet Yellen. While in the past he has criticised some of Yellen’s actions and her Democratic legacies, he has also announced that he is a “low interest rate person” like Yellen.

Job growth is no longer accompanied with wage growth.

In light of the Phillips curve, decreased unemployment should go hand in hand with higher rates of inflation. Since unemployment rate is only 4.2%; that should translate to rising inflation. Yet, that has not been the case. Job growth is no longer accompanied with wage growth.

In his Crippled America (2015), Trump argued that “our airports, bridges, water tunnels, power grids, rail systems; our nation’s entire infrastructure is crumbling, and we aren’t doing anything about it”. As a result, fiscal expansion – a $1 trillion dollar infrastructure plan – is a central tenet of the Trump agenda.

To raise capital, Trump has hoped to create an infrastructure fund supported by government bonds, similar to “Build America Bonds”.

When Trump first developed his infrastructure plan, interest rates were close to zero. But as the Fed is normalising – about to hike up the rates and exiting from quantitative easing – the plan will be a lot more expensive to execute.

“If we raise interest rates and if the dollar starts getting too strong, we’re going to have some major problems”, Trump warned already in summer 2016. That is now the reality. He can no longer rely on the Fed to ease and thus to monetise the debt issuance. Conversely, aggressive infrastructure modernisation could slow rate increases, or keep them lower.

Moreover, the Fed’s rate hikes tend to strengthen the dollar, while Trump’s debt tsunami would weaken it. Despite the rhetoric of normalisation and strong dollar, Trump needs low rates and weak dollar, while the Fed is raising rates and boosting the dollar.

The Role of Equities and Bond Yields

Trump cannot mitigate the realities of normalisation, but he can slow its pace by selecting a monetary dove. In this view, neither Warsh nor Taylor will do. The former would make Trump’s fiscal expansion prohibitively costly; the latter’s penchant for conservative stability would undermine infrastructure debt-taking.

That leaves Cohn, Powell and Yellen. However, Cohn and Yellen are Democrats, Powell is not.

After a September report that Trump had met with Warsh, stocks fell slightly before recovering, while Treasury bonds saw a significant sell-off and yields rose. It was foretaste of the kind of yield pricing that would undermine Trump’s fiscal expansion.

That would be in line with Trump’s fiscal plans.