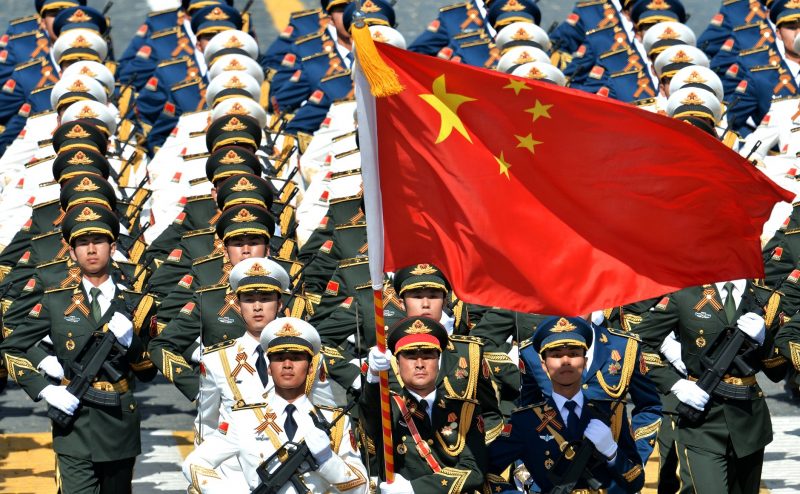 The US Navy commissioned its first aircraft carrier in 1922. Today, it has 19 of the 36 such ships plying waters around the world. The same goes for overseas military bases. While China’s first overseas military base in Djibouti has been portrayed as a world threat, the US has almost 40 “named bases” around the world, military deployments in more than 150 countries, and over 300,000 of its personnel abroad.

What about military expenditures?

The conventional narrative is that China has become assertive, while the West is ignoring its defence needs. This view is backed with the newly-released SIPRI report, which suggests that in the past decade military spending in China and Russia increased 118 percent and 87 percent, respectively. America remains the greatest military spender, but US spending plunged almost 5 percent in the past decade.

In reality, defence spending increased from the mid-1990s to the early 2010s. Then, expenditures plateaued, due to secular stagnation in advanced economies and the fall of oil prices in oil-exporting countries, many of which are major military spenders.

Yet, realities are more nuanced. After the end of the Cold War, many observers expected a “peace premium” and a significant plunge of military expenditures. In reality, defence spending increased from the mid-1990s to the early 2010s. Then, expenditures plateaued, due to secular stagnation in advanced economies and the fall of oil prices in oil-exporting countries, many of which are major military spenders.

The new list of top-10 military spenders includes the US ($611 billion), China ($215 billion), Russia ($69 billion), Saudi Arabia, India, the core EU economies, Japan and South Korea. Together, they account for three-fourths of the total. Yet, Washington spends more dollars a year on its military than the next seven biggest spenders combined – which penalises living standards in America and stability abroad.

Moreover, the US defence system is still the most innovative in the world, but that leadership is in danger of failing, due to erosion, as I argued in a major US report, The Challenges for America’s Defense Innovation (Information Technology and Innovation Foundation, November 2014).

Furthermore, the biggest aggregate military spenders are almost by default the most populous or largest economies, or both. Consequently, the intensity of military spending should also be assessed in per capita terms. In this narrative, Saudi Arabia and the US lead, with $2,000 and $1,900 per person, respectively. The two are followed by Europeans, South Korea, Russia and Japan. In contrast, China and India come last (with just 8% and 2% of the US level, respectively)(Figure 1). 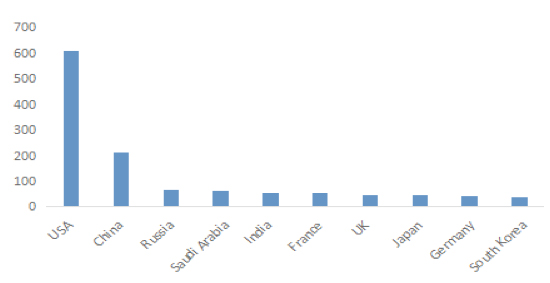 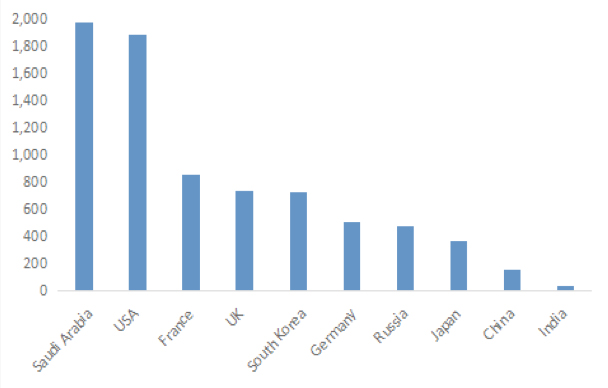 (b) Military Spending Per Capita ($ )

But perhaps this story reflects recent realities? Maybe a longer-term view would produce a different picture? Actually, that’s precisely not the case.

If the past decade’s increases in military budgets are viewed in per capita terms, the big spender is Saudi Arabia (40%). In contrast, defence expenditures have climbed slower in China and India (less than 15% each); and even less in Russia (6%). 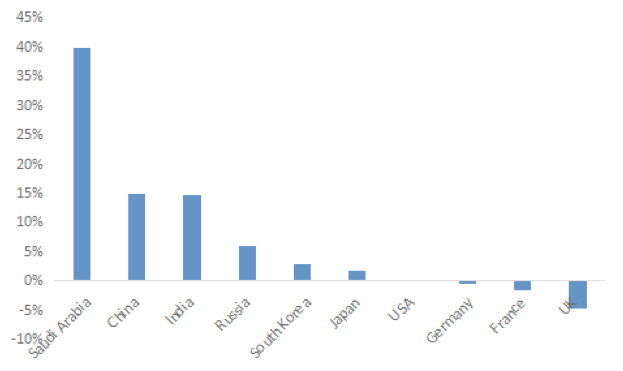 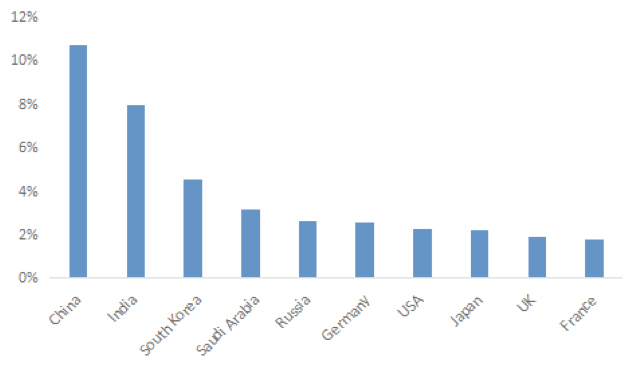 However, in the Middle East, the gap between military spending and per capita income is steep. In the past decade, increases in Saudi defense spending have been almost 40 times faster than growth in per capita incomes.

Gap Between Fact and Fiction

Usually, military assertiveness as national priority is reflected by the share of defence spending as percentage of GDP. In these terms, the great spender is Saudi Arabia (10% of GDP), which invests 5 times more than China in defence.

In the past decade, Chinese defence spending as share of GDP has been 1.9 percent, lower than in India (2.3-2.5%) or Australia (2%) and at par with the UK. Historically, it is about the same as America’s in the 1920s – before US rearmament and World War II.

In turn, Russia’s relative defence spending as share of GDP has risen by almost a half, which US neoconservatives see as evidence of assertive expansionism, along with Moscow’s conduct in Georgia and Ukraine. Nevertheless, Russia’s defence spending can also be seen as belated modernisation and as a logical result of US-led NATO expansion to Russia’s regional neighbourhood.

In the past decade, US defence spending as share of GDP decreased to 3.3 percent (0.3%), due to the Great Recession, and the Obama defence sequestration. In the postwar era, that is an exception, not the rule. In fact, the Trump administration is planning a massive Reagan-style rearmament and requesting $54 billion for the next year – an almost 10 percent increase in a single year.

If the first casualty of war is truth, then the first victim of peacetime rearmament are flawed narratives that support entrenched military interests.

To summarise, there is a deep gap between current realities and perceptions of military spending. If the first casualty of war is truth, then the first victim of peacetime rearmament are flawed narratives that support entrenched military interests.

Perhaps that’s why, when China launches a new carrier, it is typically reported as the “latest display of Beijing’s growing naval power” but when US carriers dominate regional waters and exercise their hegemony internationally, it is seen as non-news.

The original version was published by South China Morning Post on May 1, 2017