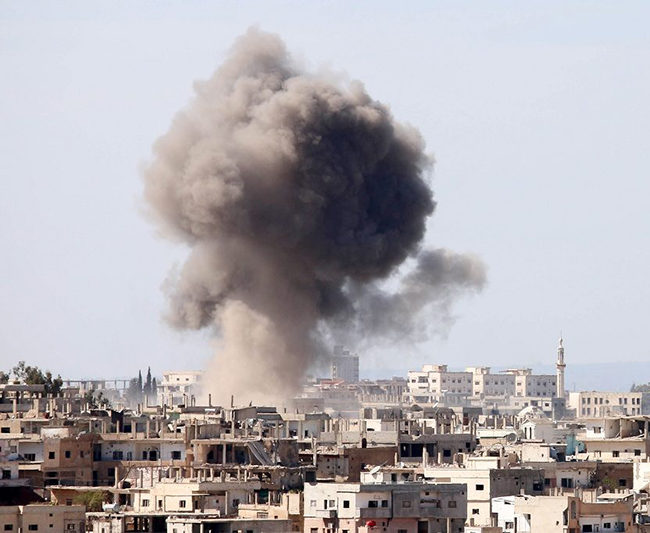 With the suspected chemical attack in the remaining rebel-held suburbs of Damascus on 4 April, it is apparent that the use of chemical weapons is indeed hard to solve. Needless to say, it is during these times that the citizenry needs to know better.

This isn’t happening, is it? Doesn’t anyone remember the British Iraq Dossier plagiarised from a U.S. doctoral student thesis? Or what about then U.S. Secretary of State Colin Powell making a fabricated presentation to the United Nations on the case for illegally attacking Iraq for its purported weapons of mass destruction? Fifteen years later Iraq, once a functioning, relatively well-to-do middle-income economy, is now a 21st century wasteland. Yet, somehow, so-called intelligence at that time dictated it was necessary to attack a sovereign state with a “preemptive strike” to forestall their attack on us.

Well, here we are again. But why now it may be asked? First, the world’s attention has recently been riveted on rogue state Israel unleashing its U.S. supplied military in a turkey shoot of unarmed Palestinian women and children protesting their lockdown in the giant open-air prison known as the Gaza Strip. So, while President Trump was trying to get back to his lost “America First” agenda, proclaiming an exit for U.S. involvement in Syria, guess what? There’s Israeli war mongering Prime Minister Benjamin “Bibi” Netanyahu braying in Trump’s ear, Israel first! And then we have the “Desert Stormy” factor to distract the U.S. domestic mass public from Trump’s alleged peccadillo’s.

For his part, somewhat ironically, as he has been busy trying to bring France’s powerful unions to heel under the banner of fiscal prudence, French President Emmanuel Macron is now quick to squander the resources of his citizens on firing missiles into the air over Syria.

Let’s not forget British Prime Minister Theresa May. Before one shred of evidence was in, May and her buffoonish Secretary of State Boris Johnson had been hissy-fitting over an alleged deadly nerve agent attack on ex-spy Sergei Skripal and his daughter Yulia by, of course, who else, arch villain Russia. Yet, encumbered by the Brexit fiasco, facing waning popularity at home and, with the Skripal’s now recovering from the alleged diabolical assassination plot showing it up as almost an amateurish gag, why not bomb Syria!

It seems lost on a world so easily manipulated by mainstream media talking heads that even if, and this really is a big if, chemical weapons were used in Syria several days ago, that the government of Bashar al-Assad is the culprit. Think about it. Finally after over a half decade of death and destruction the motley collection of jihadist groups that had been armed and financed by the U.S and its allies were staging a desperate last stand in Eastern Ghouta.

In fact most groups, except for the international terrorist Nusra Front, had already left. This means that if accounts of chemical weapons usage are to be believed, these were perpetrated either by Assad’s forces on his own people recently liberated from under jihadist truncheons and now seen waving Syrian flags in the streets. That would be nonsensical. Or, such usage would have occurred in the last area controlled by the Nusra Front the fighters of which, instructively, were getting ready to board busses and leave the following day.

What is not fully grasped by most of us watching this theater of the absurd play out in front of our eyes is that there is actually another war going on in Syria besides that captured under the rubric of a Syrian civil war between Assad and an “opposition” supported by Western powers.

However things don’t stop there. What is not fully grasped by most of us watching this theater of the absurd play out in front of our eyes is that there is actually another war going on in Syria besides that captured under the rubric of a Syrian civil war between Assad and an “opposition” supported by Western powers. Another war of influence among Islamists pitting Saudi Arabian Wahabism and Qatari Salafism which, though largely cut from the same head chopping cloth, is playing out among their state sponsors. Ring a bell? Suddenly, Saudi Arabia and a close group of allies beholden to the Saudis blockade Qatar claiming Qatar is supporting terrorists? You’ve got it. And now that all of their jihadist proxies are dislodged from Damascus suburbs, noise is being picked up on a “deal” being cut to end that blockade. In fact the U.S.-Britain-France axis of destruction seems to be placating the Saudi’s by ratcheting up their arms sales to them and offering support for a Saudi led “Arab force” to step in to take over the occupation of Syrian territory controlled now by the U.S.?

What is the saddest part of this whole story is that Syria along with Iraq and Libya were all erstwhile Soviet client states that were fiercely secular and imbibed inward focussed economic models. Such regimes resisted the neoliberal wholesale extroverting of dollarised, third world and middle income economies.

Libya, as is well known, was the wealthiest economy on the African continent under Muammar Gaddafi’s tutelage. The current collapse of Syria’s economy is worse than that suffered by Germany during World War Two. And all of these secular states had been strong supporters of Palestine against Israeli occupation and apartheid.

History is littered with corpses left by their imperial exploits. Ditto France. Even the U.S coming out as a nation required a brutal Civil War where both sides slaughtered hundreds of thousands of “their own people”.

Were the hands of these regimes bloodless? No. Saddam’s brutality against communists and other democratic opposition to satisfy Western oil interests is legendary. But is there really any regime from the U.S. to Israel that can take any moral high ground today? The British..? History is littered with corpses left by their imperial exploits. Ditto France. Even the U.S coming out as a nation required a brutal Civil War where both sides slaughtered hundreds of thousands of “their own people”.

When will the citizenry of supposed democracies around the world with their ostensibly “free” press ever begin to connect the dots? Or will all just sigh as platitudes and falsities are delivered by their governments justifying but another breach of what remains of international law? If there ever was an episode which illustrated the “manufacturing of consent”, this is the textbook example.

Richard Westra is Designated Professor in the Graduate School of Law, Nagoya University Japan. His recent books include Socialism in the 21st Century, Unleashing Usury, and Exit from Globalization.