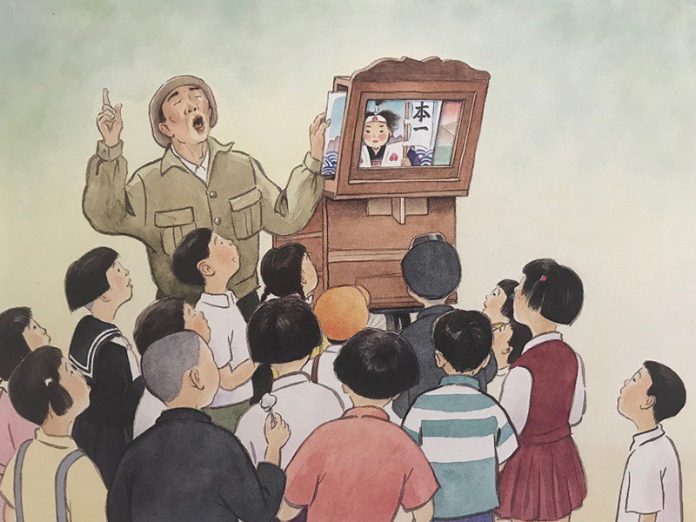 By Megumi Bailey and Géraldine Enjelvin

A centuries-old Japanese storytelling tradition is being revived for modern audiences. Meet kamishibai – from kami, meaning paper and shibai, meaning play or theatre – an ancient art form that many librarians, nursing-homes and schools use in many countries throughout the world. How and why has it evolved? What is the appeal?

In todays’ manufacturing environment, line managers and workers are familiar with kamishibai boards, also referred to as T-card systems. However, the Japanese word kamishibai (from “kami” meaning paper, and “shibai” meaning theatre) finds its origins in the twelfth century, in Japan’s art of pictorial storytelling or “etoki”: picture scrolls or “emaki” were used by Buddhist monks as tools to preach to audiences of often illiterate villagers.

In Japan: from entertainment kamishibai…

Around Japan’s Edo period (1603-1868), the standing picture style or “tachie” became popular entertainment as a street performing business. It is, however, in 1923-1929, in Tokyo, during the period of the Great Kanto Earthquake and the Great depression, that the current style of flat picture kamishibai or “hirae kamishibai” gained widespread popularity. Many unemployed became itinerant kamishibai storytellers or “gaito kamishibaiya”, who affixed their approximately A4/A3 size wooden stage or “butai” to the back of their bicycle. To draw children’s attention and gain a loyal following, they used wooden clappers and sold sweets and savoury snacks. Kamishibai storytellers did, and still do, reveal pictures one by one- hence kamishibai being somewhat closer to comics than traditional story books because pictures are more sequential. In the 1930s, street kamishibai storytellers used inexpensive techniques; they produced simple images drawn or painted on paper. At that time, kamishibai stories were generally extremely light-hearted, crude and/or mythical tales, presented in episodes with cliff-hangers and illustrated with glaring, garish colours to attract their young audience’s attention. The edibles sold were equally crude, often prepared in unhygienic conditions. As such, kamishibai became a byword for tackiness that was frowned upon by many (especially the police and government officials, eg the Ministry of Education), as it sought to exploit children.

…to military propaganda or “kokusaku” kamishibai

That same government, however, saw in kamishibai’s wide appeal, low cost and portability the ideal mass medium they could easily adapt to influence and indoctrinate both children and adults, not only in Japan but also in Asian countries under Japanese Occupation- hence the production of “colonial kamishibai”. Above all, the government wanted to capitalise on kamishibai’s (perhaps) key attribute: its power to elicit a strong and pleasant sense of togetherness or “kyokan”, as the members of the audience experience similar feelings. Hence, in the Japanese government’s hands, kamishibai became a powerful pro-war propaganda tool. Although most kamishibai’s patriotic narratives asked audiences to help the country in any possible way and be prepared to die for the “nation-family”, some were somewhat educational. Their pictures showed how to build resistant bomb shelters, what to do during air raids (eg how to put out resulting fires) etc. The government’s military propaganda strategy was so successful that it led to a tenfold increase in kamishibai publications compared with the pre-war period – when only recreational kamishibai were created.

… to educational or “kyoiku” kamishibai

Japanese educators also saw great potential in kamishibai – as evidenced in the resulting national education guidelines issued by the government in 1948. Inspired by Christian missionaries’ Gospel kamishibai stories which were first published in 1933, Gozan Takahashi initiated, in the late 1940s, the use of kamishibai as a two-way communication and interaction tool (between a performer and their audience), which distinguishes it from traditional picture-books and makes it a multimodal device. He also favored uncluttered pictures. He founded a kamishibai publishing firm called “Zenkosha” to disseminate his stories aimed at kindergarten and nursery schools. Although street kamishibai as a recreational tool was re-introduced after the devastation of World War Two, criticisms from both officials and non-officials about its immoral use and its lingering sense of tawdriness, added to the advent of household television in the 1950s, led to its demise as an entertainment tool.

Throughout her life, Japan-born and bred Megumi Bailey has been involved in Early Years Foundation Stage education through her family-run schools. After teaching science in Japanese high schools, she moved to the UK. Since 2001, she has been teaching Japanese at the University of York on the Languages For All programme.

Géraldine Enjelvin has been a university lecturer in England for over 25 years. She has trained primary foreign languages teachers and currently teaches French to undergraduates at the University of York. Her 2018 publication on kamishibai led to her June 2019 hands-on workshop at York Festival of Ideas with Megumi Bailey.