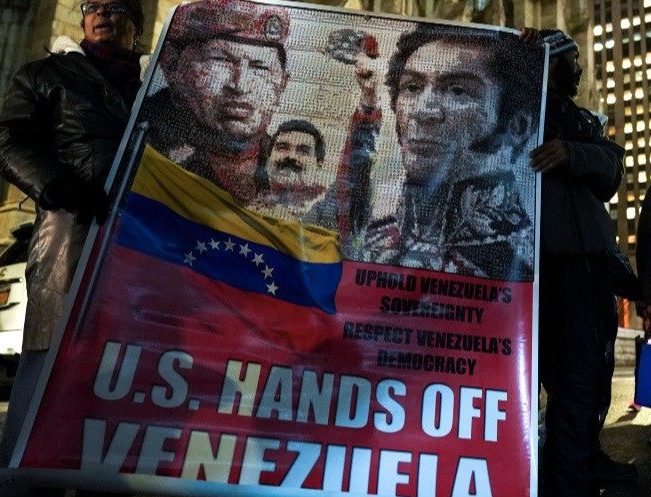 Imagine, the President of the self-declared, exceptional and unique Superpower, Donald Trump of the United States of America, has the audacity to threaten the Venezuelan military with their lives, if they keep standing behind the democratically elected President Nicolás Maduro, and defending his Government. An open threat – yesterday, 18 February, at a Miami University, in a speech of ‘fire and fury’; this time against socialistVenezuela with which he wants to finish, like with all other socialist nations – especially those in his ‘backyard’. So, Cuba, Nicaragua and Bolivia are next in Trump’s crosshairs – and / or the crosshairs of his handlers. Don’t forget, he is a staged and convenient fool for the “Deep State” or the “Profound Government” – whatever you want to call this secret clan of the Chosen People that intends to rule the world.

I cannot help being amazed at what level of inhumanity we have arrived. Trump calls openly out to assassinate those who stand behind the legitimate President of Venezuela– and the rest of the world just looks on, watches and says NOTHING – zilch, zero – tolerates such atrocity coming from the mouth of a buffoon, aka the strongman of the self-proclaimed one and only superpower of the globe. – No, much worse – the so-called civilized west, the European Union, Canada, Australia, New Zealand, Japan – and some second- and third class puppet developing countries from South America, whose people are being starved while the elite admires and dances to the tune of the USA; united in what they call the “Group of Lima” (created in Lima in August 2017, to “safe” Venezuela).Members include, Argentina, Brazil, Canada, Chile, Colombia, Costa Rica, Guatemala, Honduras, Mexico, Panama, Paraguay and Peru.

In the meantime, Mexico, under her new leftwing President Andrés Manuel López Obrador, or simply, AMLO, abstains from any decision against Venezuela. To the contrary, Mexico is part of the “Montevideo Mechanism” that comprises Mexico, Uruguay, Bolivia and the member countries of CARICOM and seeks conflict resolution through dialogue with the opposition, for which the Maduro Government has been ready from the beginning of the conflict, but which has been boycotted by the opposition, as were the 20 May 2018 elections which the non-participating opposition now calls a fraud.

Peter Koenig is an economist and geopolitical analyst. He is also a water resources and environmental specialist. He worked for over 30 years with the World Bank and the World Health Organization around the world in the fields of environment and water. He lectures at universities in the US, Europe and South America. He writes regularly for Global Research; ICH; RT; Sputnik; PressTV; The 21st Century; TeleSUR; The Vineyard of The Saker Blog, the New Eastern Outlook (NEO); and other internet sites. He is the author of Implosion – An Economic Thriller about War, Environmental Destruction and Corporate Greed – fiction based on facts and on 30 years of World Bank experience around the globe. He is also a co-author of The World Order and Revolution! – Essays from the Resistance. Peter Koenig is a Research Associate of the Centre for Research on Globalization.