Last year, four major opportunities to battle COVID-19 were missed. If vaccine inequality will prevail in the coming months, that would represent the fifth missed opportunity – with prohibitive human costs and economic damage.

Recently, I was virtually at the prestigious Bruno Kreisky Forum for International Dialogue (Vienna, Austria) and had a conversation with Ambassador Irene Giner-Reichl (for the video, see https://www.youtube.com/watch?v=sUcGG22B_YA ). The focus was on the missed opportunities and the future of the global pandemic future.

Without vaccination equity, the ongoing year could represent the fifth missed opportunity and even more challenging long-term prospects.

The first opportunity emerged around the first recorded case (Dec 30, 2019), and the WHO’s announcement of the international emergency (Jan 30, 2020). Then, the epicenter of the outbreak was still in Wuhan, Hubei.

After mid-January, China introduced social distancing and launched a historical quarantine, which soon began to flatten the curve. Mobilization was also initiated in Hong Kong, Singapore and regional proximity.

The Trump White House was informed about the virus on January 3, 2020, and the European CDC began its risk assessments only days later. But neither resulted in a phased mobilization.

United States had the institutions to battle the virus, but the Trump administration chose not to use them, presumably to “protect the economy and the markets.”

In Europe, many countries were willing to fight the virus, but lacked the common institutions needed for effective regional containment.

The second critical opportunity to contain the virus covers the 1st quarter of 2020. On March 10, the WHO declared it a pandemic. Although the epicenter had already moved to Europe and then to the U.S., full mobilization in both ensued only weeks after the pandemic warning – almost 3 months later than mobilization in proactive Asian locations.

Worse, until early February, most WHO members failed to provide WHO full country reports, which penalized international cooperation at a critical moment.

While complacency and inadequate preparedness contributed to shortages and challenges, sensational media coverage was high on hype, but short on facts. That caused an “infodemic” contributing in the West to anti-Chinese and anti-Asian hate crimes (which still prevail).

Even worse, many international observers began an odd battle against the WHO, its chief Dr Tedros and China in which effective containment was paving the way to the rebounding of the economy.

In cumulative terms, the period of the third missed opportunity covers the first half of 2020. It could be dated from the WHO’s pandemic declaration, yet broader responses in the U.S. and Europe only began around late March and early April.

As escalation continued in Europe, the COVID-19 epicenter moved from the West Coast to the East Coast in the U.S. while quarantines and lockdowns diffused worldwide.

It was only now that the social distancing measures first initiated in China in January were more fully introduced in the West, but with widespread enforcement failures.

As late mobilization proved less effective, the epidemic curve was not flattened, but fattened; in many countries for weeks, in some for months. As a result, soaring cases began to foster increasing numbers of new mutations.

In countries where quarantines and restrictions were initially shunned, particularly the UK and Sweden, the number of cases and deaths soared alarmingly.

Furthermore, outbreaks spread to poorer economies, particularly across South America, India and the rest of South and Southeast Asia, with weaker healthcare systems. Though the diffusion of the pandemic started in the 1st quarter, the quarantine escalation followed in the 2nd quarter.

In the course of the fourth missed opportunity, the outbreak epicenter stayed in or returned to the major advanced economies, particularly the United States and the Americas, several countries in Europe, and Japan.

In the US, the Trump administration’s politicized and grossly ineffective mobilization resulted in new waves already in the summer. In Europe, institutional failures led to such waves in the fall.

Many failures were unwarranted in the sense that public health policies based on science and international multilateral cooperation could have avoided much of the damage.

Although many poor countries tried to fight the outbreak, most lacked adequate resources. In due time, these public health failures in the developing economies are likely to have adverse feedback effects elsewhere.

More importantly, due to limited testing and inadequate data, a great number of cases and deaths continue to go undetected in many economies, particularly in the poorer ones. As a result, official estimates downplay the true pandemic damage.

Thanks to these four major failures, the human costs of the pandemic have soared from 7,800 cases over a year ago to some 112 million; and deaths from about 260 to 2.5 million (see Figure). Of course, the number of real cases – as opposed to confirmed ones – is likely to be significantly higher. 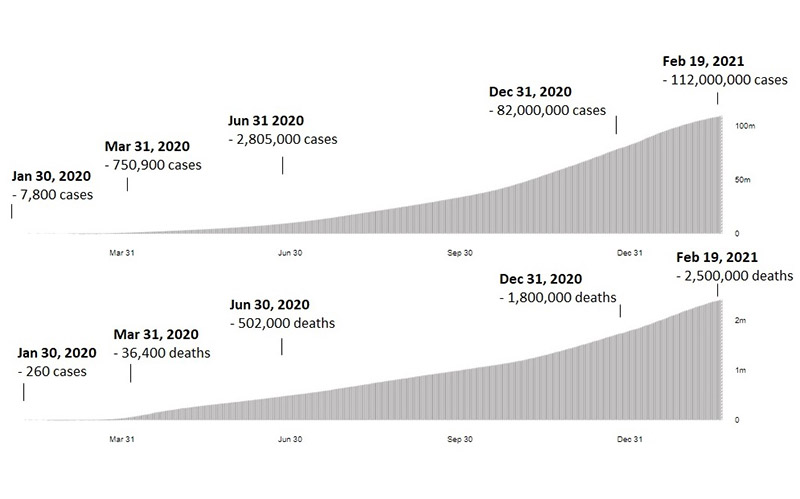 By early February, two months into the global rollout of coronavirus vaccines, 150 million doses of vaccines had been administered in fewer than 70 countries.

Early vaccine administration has favored only a few nations, which have hoarded 80% of the doses used so far. In contrast, 130 countries with 2.5 billion people have not administered a single dose.

The countries that have been favored the most in the early vaccine rollout have been mainly high-income economies, especially the G7 countries. The Biden administration is doing what it can to reverse the Trump administration’s policy mistakes, but more than a year have been missed.

Due to the gross failure of multilateral cooperation, the number of COVID-19 cases and deaths is now far, far higher than initially anticipated. At the same time, the huge spread of the global pandemic has ensured a rapidly-rising number of mutations.

In recent months, new variants of the original virus, which may be more contagious and damaging, have been spotted in the UK, Brazil, South Africa, and the US. Worse, a recombination of the variants detected in the UK and California may have caused a wave of cases in Los Angeles.

With more than 112 million infected people verifiably creating antibodies against the virus, still other versions are likely to emerge that could evade the immune system, reinfect even recovered persons and become more widespread.

The longer the crisis lingers, the greater remains the probability for potentially malignant outcomes – and, by the same token, for new pandemic waves, new restrictions and lockdowns, more economic damage, lost years, even lost decades.

Only decisive multilateral action across political differences – including WHO’s containment plan and UN’s global vaccination plan – can try to overcome still another failure of multilateralism that’s looming ahead.

It’s time to do the math: These plans could cost a few billion dollars, whereas pandemic relief spending, according to Bank of America, amounted to $20 trillion already last August.

What on earth are we waiting for?