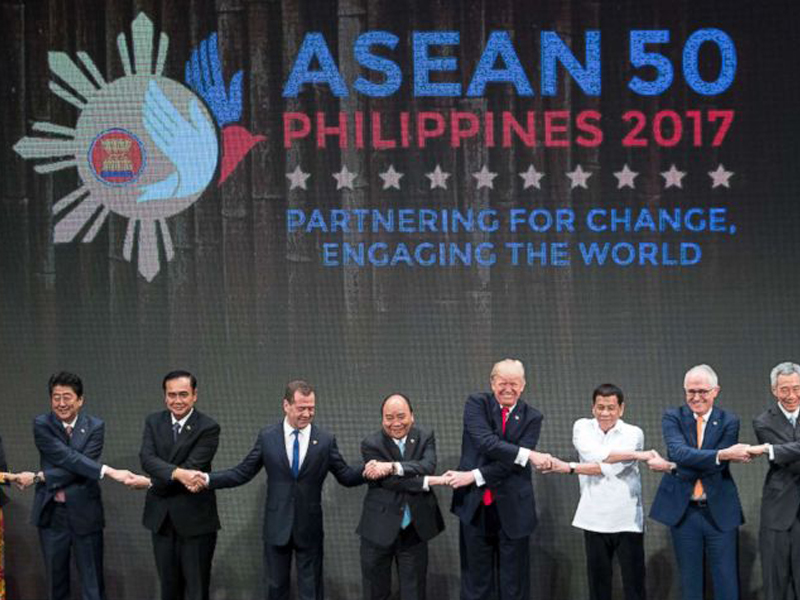 Trump’s gruelling 12-day Asia tour was a quest for mega deals. US policies in Asia are shifting. The stress on competitive strategic visions is being redefined by historic bilateral economic opportunities with China, Vietnam, South Korea, the Philippines and other ASEAN and APEC nations.

Diplomatic history has its ironies. In the Obama era, US President initiated a pivot to Asia that he had little time to visit. In the Trump era, US President has been so busy fortressing America against the world that he has had to spend more time in Asia to tame rumours about US disengagement.

This time President Trump’s strategic objective was in lucrative deal-making, which proved historical. In the future “America First” issues are likely to return with gusto, especially as the White House’s future is overshadowed by the Mueller investigation at home.

Golf, Trade and Arms in Japan

The aging Japan has a critical role in a containment scenario, which Washington would seize against Beijing, should the US-China bilateral relations fall apart.

Ever since Trump withdrew from the Trans-Pacific Partnership (TPP), the White House’s focus has been on a redefined bilateral trade deal with Japan that would also include significant arms deals. Strategically, the alliance rests on the forward deployment of 50,000 US troops and other US military assets in Japan, including the controversial Okinawa base.

After decades of secular stagnation, Japanese politics has been more stable after the victories of Abe’s Liberal Democratic Party in the 2012, 2016 and 2017 elections. But instead of seizing the historic opportunity to use political consolidation to reignite the Japanese economy, Abe has pursued controversial strategic initiatives, including re-militarisation, the US-style 2015 security legislation, and re-nuclearisation.

Since the early 1950s, the Mutual Defense Treaty has allowed the US to dominate South Korea’s military defence. Today, some 29,000 US troops are based in the country, which is included under the US “nuclear umbrella”.

Realistically, the harder Trump will push Seoul economically, the more he will stand to lose strategically – and vice versa.

However, after the Park impeachment, South Korea opted for a strategic U-turn in economy and strategic relations. Elected in May 2017, President Moon Jae-in is no friend of the US anti-missile system (THAAD); he supports sanctions against North Korea, but only as long as it is aimed at bringing Pyongyang to the negotiating table.Moon does not accept the past Park-Obama “sanctions-only” approach toward North Korea, which the Trump administration has escalated with its “maximum pressure” principle.

Realistically, the harder Trump will push Seoul economically, the more he will stand to lose strategically – and vice versa.