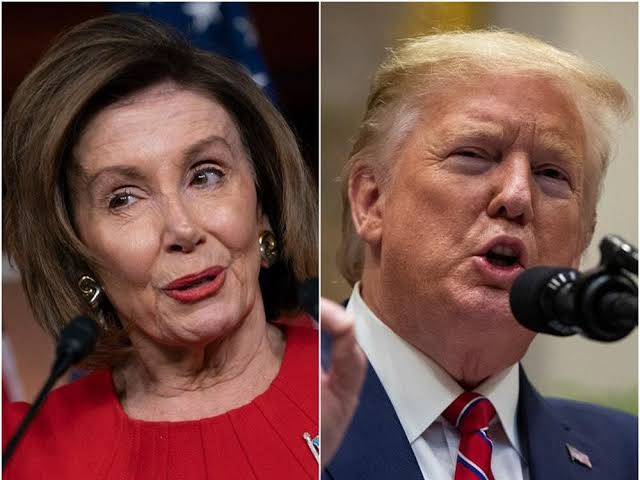 According to the corporate media, revisions to the USMCA demanded by Democrats since the initial agreement was reached with Mexico a year ago, have been agreed to by Trump, Pelosi, and the president of Mexico, Lopez-Obrador. The revisions reportedly mean more protections for US labor in particular. However, all we have at the moment is what’s reported in the corporate and mainstream media about the revisions. We’ll have to wait to read the final print of the actual agreement. But even the media reports are not much more than vague generalities about the terms and conditions of the revisions. The much heralded improvements to US labor interests in particular don’t appear that different from Trump’s originally negotiated deal a year ago.

The official media story line is that the new revisions provide protections for American workers now that did not exist previously during the 20+ years of NAFTA 1.0. During that period, easily 4-5 million US jobs were diverted to Mexico.

At issue during negotiations on revisions to NAFTA–now called the USMCA–was whether US inspectors would be allowed access to Mexico factories and businesses to ensure that the new labor terms of the revised USMCA trade deal were being enforced. Lopez Obrador and Mexican business have been adamantly opposed to allowing US inspectors access to Mexican factories, which suggests they had something to hide. (Mexico and AMLO both are in agreement on this issue). THey demanded that, instead of inspectors, there would be a joint US-Mexican panel to arbitrate labor disputes. But the issue is independent inspection, not a panel to rule on disputes that may never rise due to absence of inspection. What good is a panel of any kind ruling on a dispute that doesn’t get raised because there’s no independent inspection in the first place? Also important is whether the inspectors inspect unannounced, or whether they have to give a pre-notice before they inspect (that phony arrangement is how the US OSHA law has functioned with little effect for decades). Moreover, if there’s panel, how is it determined and what is its composition? If it’s equal US-Mexico representation, it might never come to a final decision.

In other words, if the final terms and conditions in print for the USMCA provide only for panels, in lieu of unannounced inspectors, then the so-called great labor protections touted by Democrats as part of a final deal are really just another fig leaf of labor protection.

While the mainstream media and Democrats talk up the labor revisions in today’s final deal, the real substance of the recent revisions–sought by Trump and US corporations and bankers–has had more to do with protecting the interests of US big pharma companies and US oil and bankers.

Big pharma has always wanted NAFTA-USMCA to include what it wanted in the Trans Pacific Partnership (TPP) deal it didn’t get in 2017: i.e. protections on pricing of its drugs in Mexico at levels closer to its price gouging levels in the US. The fine print in the USMCA will tell whether it got this, or at least got a big change from Mexico’s current rules that keep the price of drugs lower in Mexico than in the US.

Another reported big concession by Mexico in the recent revisions apparently addresses the protection of US oil and energy, telecom and banker interests. Since assuming the Mexico presidency, Lopez-Obrador (AMLO) has been moving toward re-nationalizing Mexico’s PEMEX oil company that had come increasingly under financial control in recent decades by US investors and banks. AMLO wants to restore it to its former Mexican government ownership, or at least to control by Mexican banks and capital. Legislation has been drawn up by the AMLO adminstration to enable re-nationalization. US bankers and oil interests in response have wanted changes in the NAFTA-USMCA (NAFTA 2.0) to protect them from re-nationalization. They apparently have gotten it. Reportedly language in the USMCA now exempts oil, gas, power, transport, cement, banks and telecom from any potential future Mexican re-nationalization.

Free trade treaties are always more about money capital flows (from the US into the host country) than about goods flows across borders, even though the goods flows is what’s mostly reported in the media and press. NAFTA has been no different. Free trade–whether the original NAFTA 1.0 or the current 2.0 revisions called the USMCA–is about financing the relocation of US business and manufacturing from the US to the host country.Then about allowing US companies thereafter doing business in the host country to ship their lower cost goods back into the US market without having to pay tariffs. US corporations make greater profits, not only from cheaper production costs and absence of tariffs, but from continuing to charge higher prices in the US when they ship them back, tariff free, as well. But this is all greater profits from production and goods flows.

Free trade provides even greater profits for US investors and bankers who ‘grease the wheels’, so to speak, of the money capital flows in the first place. The money flows are what make profits from production of goods flows all possible int he first place. Banks charge the interest on the loans, and big fees on mergers and acquisitions by US business in the host country, now allowed by the free trade treaty. Banks also buy up the banks in the host country and make more money from lending to host country businesses. Offshore production and lending also allow US multinational corporations to engage in what’s called ‘intra-company’ price manipulation which permit them to reduce taxes on lower reported profits in the US. The offshored, foreign subsidiary operations ‘book’ all the profits–kept offshore and reduced in the US by means of intra-company price manipulation. Profits are still further boosted as now, under Trump, US multinational corporations get to avoid virtually all taxes on their offshore operations, as a result of Trump’s 2018 multi-trillion dollar tax cuts for multinationals.

Yet Trump, the Democrats, and the US corporate media would have us think the USMCA revisions are all about protecting US workers’ interests by introducing dispute panels. The five million US workers who have lost their jobs under NAFTA gained nothing, and paid everything in lost jobs, under NAFTA 1.0. And that’s not changing one iota under NAFTA 2.0, e.g. USMCA by introducing panels–or even if actual independent inspections were allowed. Under Trump no jobs have come back to the US due to any of his trade wars; and none will after USMCA revisions are signed off either.

US workers will get, as they have been getting, nothing out of the USMCA or any Trump trade deal so far, more lost jobs and higher prices on imported goods– to be exact $42 billion more in higher prices.

So why the closing of the USMCA deal and revisions now? After a year of stalemate in Congress? Likely because Democrat leaders are desperate to show their impeachment proceedings against Trump are not preventing them from passing legislation otherwise. But does anyone think that Trump, his Trumpublicans in Congress, i.e. Mitch McConnell and other Republican political sycophants, would likewise sign a deal if they were in the Democrats place? No, they’d play hardball and continue to refuse to agree to anything right up to the 2020 election.

Trump has recently softened his USMCA position as well in an attempt to close a USMCA deal with Congress and Mexico. Why now? Because Trump’s trade war with China has stumbled and stalled. It appears, per the Wall St. Journal today, that Trump will postpone his scheduled December 15 additional tariffs on China as a concession to get China to buy more of US farm goods. Trump needs to show something from his 18 months of trade wars. The US trade deficit has barely shifted at all during the period, still running near $50b a month. He desperately needs the USMCA deal–any deal–given that the China-US ‘mini’ trade deal is going nowhere and may not even get signed next year. (And it won’t if Trump does not agree in 2020 to further cut US tariffs if he wants more China farm purchases).

Trump’s recent re-imposition of tariffs on Brazil-Argentina steel should also be viewed as part of the mix of trade events in recent weeks. as the China mini-deal stalled, he had to look tough somewhere. Re-imposing steel tariffs was also a not so veiled threat to Brazil-Argentina (which hardly import any steel to the US at all) that they should think twice about increasing sales of wheat and soybeans to China. Trump’s tariffs on their steel is a shot across their trade bow. Both Trump’s concessions on USMCA and his re-imposing of steel tariffs on Brazil-Argentina are indications of his failing trade policy and his weakening bargaining position on such policy as the US 2020 election grows nearer.

Jack Rasmus is author of the just released book, ‘The Scourge of Neoliberalism: US Economic Policy from Reagan to Trump’, Clarity Press, January 2020, which is now available for purchase at 20% discount from his blog, jackrasmus.com, and website, http://kyklosproductions.com

Financing the SDG Agenda: The Potential of Sukuk The Indonesia Case