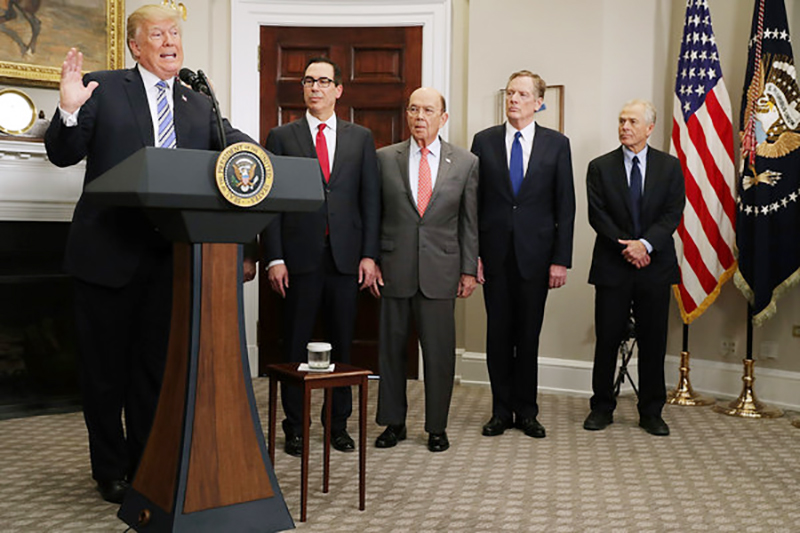 (This is the first of a three-part series.)

In this commentary, Dr Dan Steinbock argues that Trump’s tariff wars take place in a very bad time, are based on bad policies and will have bad consequences. This is the first of a three-part series. Here the focus is on four controversial U.S. policymakers, the path to tariff wars, the doldrums of globalization, and the rising risks ahead.

In less than two years, the Trump administration has undermined more than seven decades of U.S. free trade legacies. That is both a reflection of and a catalyst for the further erosion of globalisation.

Yet, these trade wars did not come out of the blue. The path to the tariff wars is becoming increasingly difficult to reverse or slow down, and the timing of the trade war could not be worse. It is taking place at a historical moment when global economic integration could further stagnate or even fall apart.

Until recently, the trade hawks in the White House had been contained by more mainstream policymakers, such as former Secretary of State Rex Tillerson, Director of the National Economic Council Gary Cohn, and Treasury Secretary Steve Mnuchin. After Tillerson lost his job and Cohn resigned, things changed. Cohn’s Goldman Sachs companion Mnuchin proved weaker, while Ross leaned on winners, regardless of the cause. As free-traders moved out, protectionists stepped in.

The key ideas evolved from mercantilist economic doctrines, the Reagan era trade wars in the 1980s and more controversial moral hazards and financial dealings by Navarro and Ross, respectively. In the protectionist camp, the key players are Navarro and DiMicco, two vocal free trade critics, who have long been determined to prioritize steel at the expense of other U.S. industries.¹ Lighthizer is a Reagan era trade hawk who served as Deputy USTR in the ’80s, sees China as Japan 2.0 to be contained and would like to have the Republican Party become a party of tariffs as it once was.

Dr. Dan Steinbock
is the founder of Difference Group and has served as research director at the India, China and America Institute (USA) and visiting fellow at the Shanghai Institutes for International Studies (China) and the EU Center (Singapore). For more, see https://www.differencegroup.net/

5. On the waves of globalization (minus centuries of colonialism), see Globalization, Growth, and Poverty: Building an Inclusive World Economy. World Bank 2002. For a discussion of the state of global economic integration, and the shift toward South-to-South globalization, see Steinbock, D. 2017. “The Great Shift of Globalization: From the Transatlantic Axis to China and Emerging Asia,” China Quarterly of International Strategic Studies (CQISS), 03:02, 193-226.

6. See World Investment Report by the UN Conference on Trade and Development between 2008 and 2017 (annual), and UNCTAD Global Investment Trends Monitor.

8. See Global Trade Alert Report by the Centre for Economic Policy Research between 2008 and 2017 (annual).

12. Neither the zero-bound interest rate policies (ZIRP) nor rounds of quantitative easing (QE) have been adequate to rejuvenate maturing and aging economies. The Fed’s rate hikes could prove fleeting, along with efforts to ignite inflation, while the European Central Bank will have little time to tighten or exit from large-scale asset purchases. The Bank of England must cope with the collateral damage of the Brexit and the Bank of Japan has not been able to end Japan’s secular stagnation, despite massive monetary injections and sovereign debt that now exceeds 250 percent of the country’s GDP.