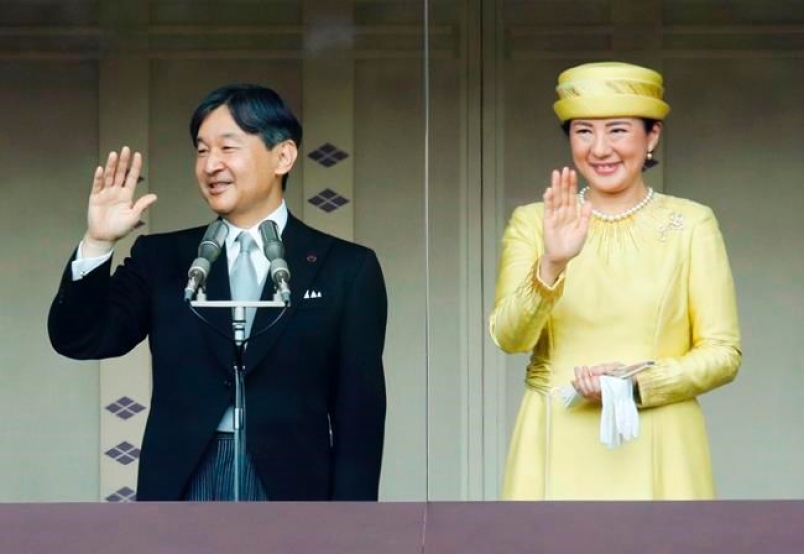 As the spotlight has been on Japan’s new Emperor Naruhito, the economy is coping with half a decade of Abenomics, monetary injections, huge debt – and a proposed sales tax that could make things a lot worse by the fall.

Ever since Shinzo Abe started his second stint as Prime Minister, Japan has focused on positive economic signals, which has sparked futile hopes, including a bad sales tax proposition.

Japanese officials vow to stick to the planned tax hike in October (it has been delayed twice), barring a big economic shock. With the 2019 budget, Abe hopes to offset adverse impact of the sales tax by returning much of the extra revenue to consumers via $18 billion of offsetting measures, instead of faster debt-reduction.

But recently, the Cabinet downgraded its headline economic assessment for the first time in three years. Manufacturing, housing and retail indicators reflect signs of weakness, while first-quarter figures, expected in May, could show a contraction – especially as the impact of Trump’s tariff wars is spreading in Asia.

Half a decade of Abenomics

In December 2012, when the Liberal Democratic Party returned to leadership, Abe campaigned on renewed fiscal stimulus, aggressive monetary easing and structural reforms. The devaluation of the yen, critical to Japanese exporters, was the tacit denominator of the proposed changes.

In addition to a huge liquidity risk, Tokyo took another risk in timing, as I argued then. It sought to implement the fiscal stimulus in 2013, while consolidation would follow. Obviously, unease increased in 2014. As Abe went ahead with the sales tax hike that spring, it triggered a sharp slump. Instead of strong expansion, consumers were hit hard and Japan began its third lost decade.

Yet, recently, international observers have been remarkably optimistic. Last November, the International Monetary Fund (IMF) reported Japan has had an “extended period of strong economic growth.”

As the growth rate, supported by huge monetary injections and rapidly-rising debt, increased to 1.9 percent in the fourth quarter of 2018, upgraded from preliminary data, and inflation seemed to be strengthening in early fall, the Abe administration began to flirt with another tax hike, again. “The sales tax hike to 10 percent is needed the most to secure stable financial resources to pay for social security for all generations,” says Finance Minister Taro Aso.

That is a pipe-dream. Huge monetary injections and rapidly-rising debt will undermine Japan’s economic future.

More than half a decade ago, the new governor of Bank of Japan (BoJ), Haruhiko Kuroda, pledged to do “whatever it takes” to achieve the 2 percent inflation target.

Under his reign, the BoJ boosted quantitative and qualitative easing with negative interest rate policy.

In 2018, BoJ’s bond and stock holdings topped 100 percent of GDP. Now the BoJ is adjusting the pace of bond purchases so that its holdings would not surpass 50 percent of the GDP, which is seen to herald the eclipse of monetary accommodation.

In 2018, foreigners held an all-time high of 12 percent share of outstanding debt, yet most debt is in Japanese hands and in yens. In turn, falling rates in the U.S. and elsewhere have made Japanese bonds attractive, as long as their yields are not expected to fall much because of BoJ policy.

But times may be changing. At year-end 2018, the BoJ reduced slightly its holdings to 43 percent of all issued Japanese government bonds. It was the first quarterly fall in almost seven years. In the past five years, Japan’s government debt has climbed to 255% to GDP. As long as interest rates remain ultra-low, servicing it is affordable. But nothing lasts forever.

Moreover, the original target – sustained 2 percent inflation – has proved elusive and some argue that the BoJ’s purchases of exchange-traded funds (ETFs) are distorting the stock market.

Toward the defining moment

Japan faces more urgently the same dilemma that today burdens most advanced economies: How to support high living standard with low or no growth?

In the past three decades, Japanese living standard has increased from over $30,000 to nearly $45,000. Yet, Japan’s trend growth has plunged from 5 percent to less than 0.5 percent – over 90 percent (Figure). 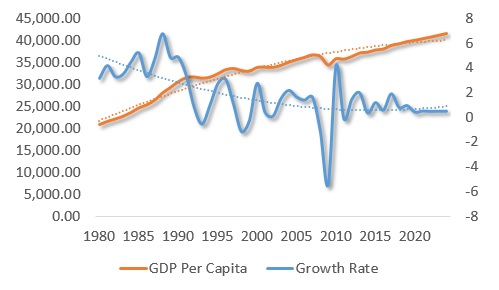 Nevertheless, the Organisation for Economic Cooperation and Development (OECD), the advanced economies’ think-tank, is urging Japan to triple its tax to 26 percent to achieve a large primary surplus, by spending cuts, tax increases and curbing healthcare services. In reality, such austerity could derail remaining support structures for growth, inflation and average prosperity in Japan.

Japan is the first advanced economy in secular stagnation, but others remain in the same path. Penalising the remaining middle-classes and working people, while sustaining the kind of privatisation, liberalisation and deregulation, which led to the income gap in the first place, is foolish.

To resolve structural challenges, a more realistic program is required to ensure fiscal sustainability, while raising productivity and reducing all unnecessary barriers to employment. But that’s only a start.

Japan needs a national drive to reduce its gender income gap (it ranks 110th in the 2018 Gender Gap Index) and another to attract far more immigrants (with faster naturalisation). In both cases, a change of magnitude is needed; policy nibbling will go nowhere. And instead of rearmament, militarisation and conflicts, Japan needs accelerated job-creation, economic development and regional cooperation.

As the world’s third-largest economy and the second-largest debt market, Tokyo’s future choices will have repercussions across the world – in good and bad.

Featured Image:Japan’s new Emperor Naruhito, left, waves with Empress Masako, right, to well-wishers from the balcony during his first public appearance with his imperial families at Imperial Palace Saturday, May 4, 2019, in Tokyo. Emperor Naruhito has greeted to the public for the first time after his May 1 succession, expressing hope for Japan to keep pursuing peace (Fumine Tsutabayashi/Kyodo News via AP)

Dr Steinbock is the founder of the Difference Group and has served at India, China, and America Institute (USA), Shanghai Institutes for International Studies (China) and the EU Center (Singapore). For more information, see http://www.differencegroup.net/

The original version was released by South China Morning Post on May 1, 2019.