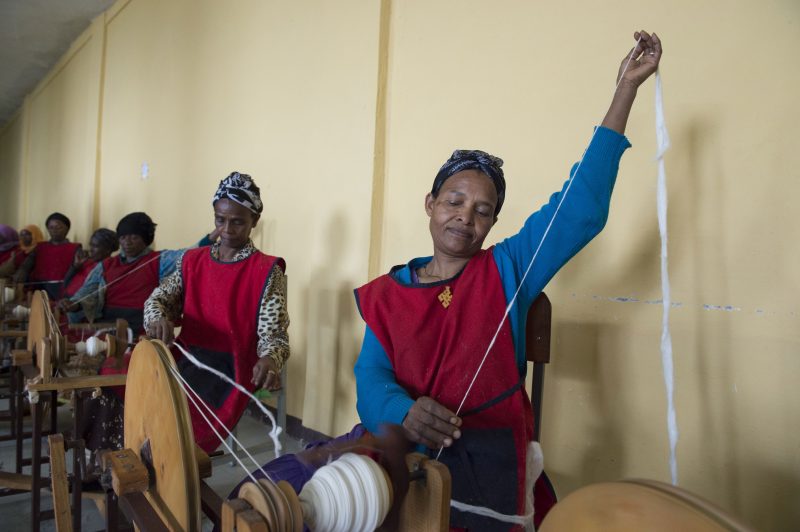 In the 20th century, Africa gained political independence but fell behind the economic boom. In the 21st century, it is Africa’s turn – but not without a stronger state and a new external push.

After struggling against corruption, lawlessness and terror, President Buhari’s administration has outlined an economic recovery plan targeting 7 percent GDP growth rate from 2017 to 2020. While many African economies are hoping for takeoff in the coming years, Nigeria represents the region’s greatest economic potential.

For longer than a century, Africa’s economic miracle has been a pipedream. But things are changing.

In the mid-2000s, after decades in the slow lane, African economies hit the accelerator. But what lies ahead for the continent is not an open highway, says Justin Yifu Lin, World Bank’s former chief economist, with co-author Andrea Goldstein. “If Africa is to achieve its potential as the next emerging-market engine of global economic growth,” the two write, “it will have to industrialise.”

But the devil is in the details.

Ever since Britain’s first Industrial Revolution, the rise of labor-intensive light manufacturing (textiles, garments, shoes, and associated tools and machinery) has played a major role in pushing up national incomes. However, as Africa has not managed to participate fully in industrialisation since the 1970s, it has lagged behind the rest of the developing world.

Lin and Goldstein advocate a new catalyst role for government. They emphasise that an effective industrial policy must cover not just manufacturing but the kind of economic activities that support it. This means vital role for external actors, particularly for large emerging economies, such as China, that are able and willing to participate in African growth.

After three decades of economic stagnation and income polarisation in the name of freedom and democracy, Lin and Goldstein are right to stress a different, more inclusive view of economic development.

And yet, despite Africa’s great long-term potential, the future may prove more challenging than anticipated. The fact that Africa fell behind globalisation and associated catch-up growth after the 1970s should not be associated with domestic economic choices only.

Legacies of Colonialism and Decolonisation

During colonialism, the largest colonisers – the British Empire and its European counterparts – did contribute to the building of infrastructure in some African nations. Yet, the latter was geared to serve the coloniser’s economic and strategic needs, not those of the colonised. In Africa, the colonial efforts focussed on raw materials and commodities that were most needed for the colonisers’ industrialisation during and after the “scramble for Africa” in the late 19th century.

The great irony should not be discarded. Historically, Western Europe’s Belle Époque (1870-1914) – an era of great optimism, regional peace and stability, rapid industrialisation and technology innovation – went hand in hand with the “Scramble for Africa”; that is the devastating invasion, occupation, division, colonisation and annexation of African territory by European powers during the period of “new imperialism”.

Moreover, the end of colonialism did not translate to rapid growth either. In the postwar Africa, political independence came often with great destabilisation, which virtually ensured that nascent efforts at industrialisation would fail, remain partial, or stall.

Africa’s political independence was followed with strife and fragmentation, civil wars, and sectarian divisions, which were further exploited by major powers and multinational giants during the Cold War. And yet, industrialisation requires stability, not destabilisation.

As the Nigerian story attests, political independence was followed with strife and fragmentation, civil wars, and sectarian divisions, which were further exploited by major powers and multinational giants during the Cold War. And yet, industrialisation requires stability, not destabilisation.

After the Cold War, interventionism by external powers has shifted toward economic exploits. Between 2004 and 2013 alone, developing and emerging economies lost $7.8 trillion in illicit financial flows (Global Financial Integrity), which averaged at 6.5 percent per year; that is, nearly twice as fast as global GDP.

Typically, Sub-Saharan African economies, despite very low prosperity levels, have a key role among those that have suffered the most outflows, including South Africa ($20.9 billion in average illicit financial flows 2004-13), Nigeria ($17.8 billion), Zambia ($2.9 billion), Ethiopia ($2.6 billion), Cote d’Ivoire ($2.3 billion), and so on.

Economic stability also requires appropriate institutions. Yet, according to the Rule of Law Index (World Justice Project), many African economies have low scores, including Cameroon, Zimbabwe, Ethiopia, Uganda, Kenya, Nigeria, Sierra Leone, Liberia and so on. Even the best – South Africa, Ghana, Botswana and Senegal – do not make it to the top-40 list.

The same goes for corruption. According to Transparency International, corruption perceptions are greatest among African nations, including Somalia, South Sudan, Sudan, Guinea-Bissau, Chad, Central African Republic and Burundi. Even the best performer – Botswana – is not in the top-30 league. Nigeria’s rank is 136, along with those of Myanmar, Guinea and Mauritania.

The lesson is that if illicit financial flows are allowed to prevail, if the rule of law cannot be sustained and if corruption grows pervasive, even rapid industrialisation or modest success at sustained economic growth will not contribute to economic modernisation and rising living standards.

What African economies need is a series of industrial takeoffs across the entire region. That is a viable project, but not without stronger state catalyst and external actors’ participation, particularly large emerging economies such as China which have more in common with African nations than the slow-growing, rich Western economies.

Toward the Big Push

While nascent takeoffs have been evolving for a long while, they need a “Big Push”. Developing economies require large amounts of investments to embark on the path of economic development.

Yet, the potential between the two regions is not that different. Between 2000 and 2010, overall labor productivity growth in Africa was second only to Asia, where structural change continued to play a vital positive role. The real difference is that, in emerging Asia, the share of employment in manufacturing is more than double the share of employment in manufacturing in low-income African countries.

In the postwar era, development economist Gunnar Myrdal showed that the strong state and associated public institutions ensured sustained economic growth in advanced economies. In contrast, the “soft state” virtually ensured stagnation in Asia and other developing regions. Until recently, neoliberal policies have further contributed to arrested modernisation in Africa, while keeping soft states in power.

In the early 21st century, the global landscape is finally shifting, but not because of initiatives in the advanced West. Rather, it is the rise of the large emerging economies in the past two decades that can finally offer a new and more realistic view of a strong state and the required push for industrialisation.

The original commentary was released by BusinessDay, Nigeria’s leading business daily, on March 2, 2017