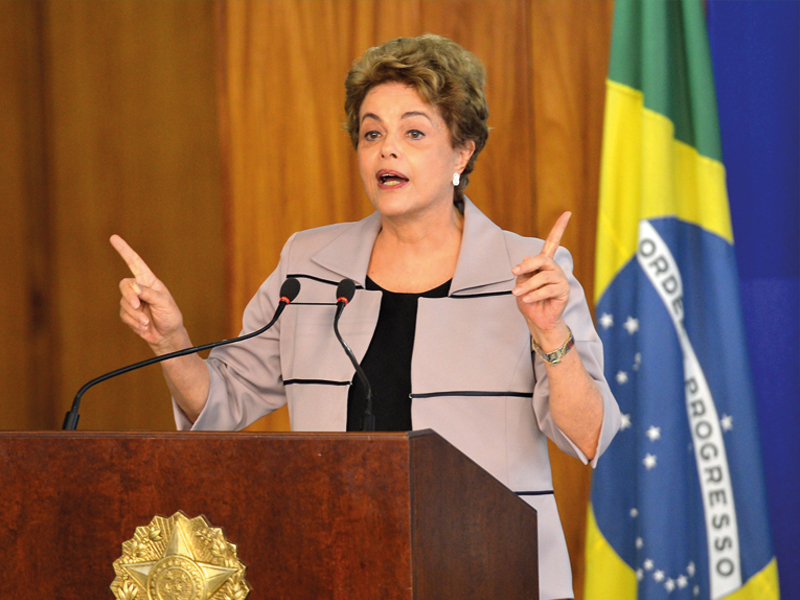 While international media focuses on Brazil’s mass demonstrations against corruption, efforts behind the façade precipitate regime change, restoration of a pre-Lula order, and a struggle against the BRICS nations. The US feels threatened by an era of multipolarity, which deeply implicates China, and other emerging economies.

In August 2016, Rio de Janeiro should host South America’s first-ever Olympic games, which were supposed to be its great coming out carnival, even amid campaigns against the Zika virus.

Only a few years ago, Brazil exemplified the BRIC dream of rapid growth. Now it is coping with its most severe recession in century. But there’s worse ahead.

When Brazil’s first working-class President Luis Inácio Lula da Silva took office in 2003, the poor nation was on the verge of an economic implosion. President Lula’s centre-left Workers’ Party (PT) and its coalition won the markets with conservative fiscal policy and lifted millions from poverty, while living standards rose by 60%.

So Washington’s neoconservatives began to strengthen ties with Brazil’s centre-right opposition. Politically, this opposition comprised conservative social democrats (PSDB), Democrats, and Lula’s more liberal allies, juridical authorities and military leaders. Economically, it featured the narrow elite, which reigns over an unequal economy polarised by class and race, as well as conservative and highly concentrated media conglomerates owned by a few families, including Marinho brothers’ Grupo Globo. The demonstrators represent a multitude of groups, such as Free Brazil movement, neoliberal activists, Students for Liberty, Revolted Online etc. – but several have cooperated with or been funded by, the Koch brothers, the John Templeton Foundation, National Endowment for Democracy and many others.

During these years, Sérgio Moro, a Harvard-trained judge, and other emerging Brazilian leaders participated in the US State Department’s International Visitor Leadership Program (IVLP), which opened doors to US agencies and institutions struggling against terror and money laundering. Created amid the Cold War, IVLP has engaged 200,000 international leaders with their US counterparts, including current or former chiefs of state or heads of governments. Meanwhile, Brazil’s federal police began broader cooperation with the FBI and CIA in anti-terrorism.

But in the Lula years, economic boom kept the forces of the Ancien Régime at bay.

The reason why the state-run oil giant attracts so much heat today goes beyond corruption. In the Lula era, Petrobras was made accountable of all offshore blocks of oil, while US oil giants were kept at distance and oil exploration was started with China’s Sinopec. Now that Petrobras is bleeding, a privatisation fire sale would bring US players back in.

When Rousseff took office half a decade ago, she hoped to build on Lula’s success. In practice, she rewarded her constituencies with higher pensions; ensured tax breaks to strategic industries and spent unwisely. Meanwhile, world trade plunged, commodity prices collapsed, China’s growth decelerated and the Fed initiated rate hikes. As a result, “hot money” began to flee Brazil leaving behind asset shrinkages, deflation and depreciation.

According to Wikileaks, the US National Security Agency (NSA) had been tapping some 30 Brazilian government leaders’ phones (Rousseff, ministers, central bank chief, etc), and corporate giants (including Petrobras). Brazilians believe that US intelligence agencies have a dark track record not just in security intelligence but economic espionage and strategic destabilisation.

Brazil has a long legacy of corruption that stems from colonialism, economic elites, race and class, the military dictatorship (1965-84) and its foreign allies, including the US. Yet, there have been no comparable police raids in the post-military era. In this view, the timing of the corruption inquiry and the police raids was politically expedient. They did not begin when they were legally warranted but when Rousseff became politically vulnerable.

Internationally, Brazil’s mass demonstrations are depicted as a quest against government corruption. That is a gross simplification. In reality, current volatility is not just about corruption, which is pervasive and extends across Brazil’s entire political class, including the ruling PT. Rather, it is about destabilisation that is paving way to a regime change.

When Lula left office in 2010, he enjoyed 90% approval ratings. A while ago, Lula was still expected to stage a comeback in the 2018 presidential election. Then he and his wife were forced to testify in São Paulo about alleged corruption. Opposition saw it as another reason for mass demonstrations; Lula’s supporters as an effort to tarnish the name of Brazil’s most successful political leader. As Rousseff invited Lula to join the government as its most powerful member, conservatives argued that the invite was just another attempt to shield him from corruption investigations because in Brazil only the Supreme Court can authorise such investigations.

To neutralise Lula’s return, Moro blocked his appointment relying on recordings of tapped phone calls between Lula and prominent public figures, including the incumbent president. Rousseff regarded the illegally-recorded and released calls as a political “attempt to overstep the limits of the democratic state”. In this narrative, Moro expressed his ultimate goal already in 2004, when he advocated “authoritarian subversion of juridical order to reach specific targets”, including the use of media to intoxicate political atmosphere.

In this scenario, the corruption case has served to discredit the government. So when Rousseff invited Lula into the government, the objective became to neutralise Lula’s comeback. During his time in the US, Moro learned that dominant media can be used to leak stories that discredit targeted leaders in dominant media prior to the court. In the Kafkaesque new normal, you are no longer innocent until proven guilty; you are guilty until proven innocent in the name of “national security.”

Struggle Against the BRICS

The Brazilian judicial strategy is reminiscent of the Italian Mani Pulite investigation in the 1990s, which relied effectively on media (dominated by tycoon Silvio Berlusconi) to delegitimise the political system, which was replaced by authoritarian leadership (again, Berlusconi). Instead of violent coup d’etat or military dictatorship, judicial strategy can achieve regime change by legally acceptable means. In Brazil, Rousseff’s impeachment is moving ahead and much more will follow.

In the view of Washington (and Brazil’s opposition), Lula, Rousseff and the PT remain controversial because their emphasis on multipolarity (which excludes American exceptionalism); support of the BRICS (which is seen to operate against the US and G7 interests); funding for the BRICS New Development Band and Asian Infrastructure Investment Bank (which are seen to undermine the power of G7 international multilateral organisations); efforts to overcome income polarisation (which is regarded as potentially subversive), Latin American integration (which is perceived as anti-NAFTA) and alternative global Internet regime (which would bypass US control); and a multipolar currency basket (which is seen as an attempt to emasculate the global dominance of the US dollar).

For decades, terrorism had been understood largely within the revolutionary context of post-colonial movements, prompting the now widely rejected dictum that “one’s man’s terrorist is another man’s freedom fighter.”

In this narrative, Brazil’s destabilisation is strategic and less about the rise of democracy than about an effort to replace it with new authoritarianism. In turn, anti-graft campaigns focus on inconvenient political parties, but exclude economic elites and foreign interests that sustain corruption. However, what happens in Brazil won’t stay just in Brazil. Rather, it has potential to radicalise centre-left opposition in Brazil and harden sentiments in other BRICS nations.

As global growth prospects continue to dim, what advanced and emerging economies need is cooperation that benefits both – not restoration of ancient regimes that insist on privileges that were never either legitimate or democratic.

This commentary was originally released by China-US Focus on March 28, 2016.

Dan Steinbock is the founder of Difference Group and has served as research director of international business at the India China and America Institute (US) and a visiting fellow at the Shanghai Institutes for International Studies (China) and the EU Centre (Singapore). For more, see http://www.differencegroup.net