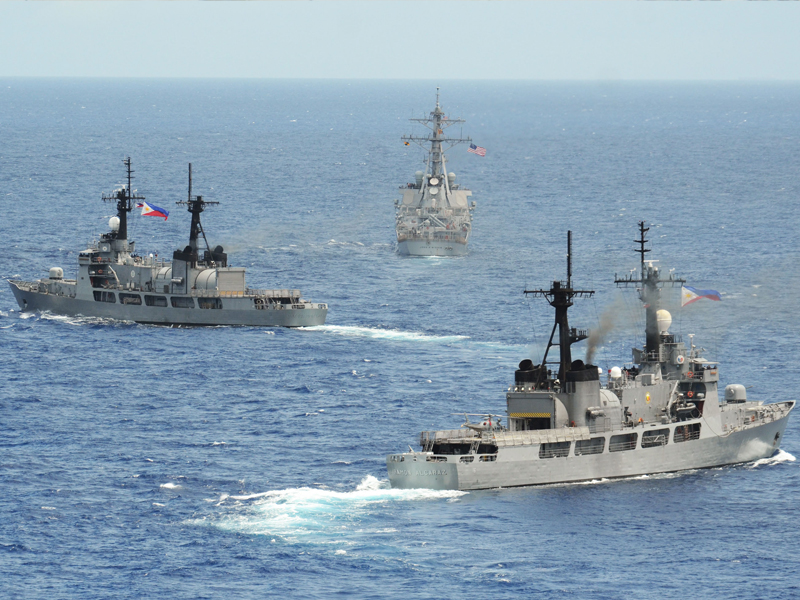 The ideal strategic goal is for the Philippines to enjoy the friendship of the US, Japan and China and not be a pawn in their inevitable conflicts – such as how the South China Sea dispute is being used as the US’ disguised pivot in Asia.

Like China, we are an Asian country, which is rich in natural resources. But compared to China we are just a small country, and an archipelagic country endowed with rich resources, being the object of big powers fighting each other in order to gain control of our land and its natural wealth. We have been under the Spanish empire as a colony for almost four centuries. The Dutch, and the British wanted to oust the Spaniards and incorporate us in their own empires. Then came the Americans who offered to help our Revolutionary fathers in freeing us from the Spanish yoke, only to betray the proffered “friendship”, fought our Revolutionary Army for Independence, and annexed us to the emerging American Empire. General Gregorio del Pilar, in whose honour Fort del Pilar, home of the Philippine Military Academy in Baguio City was named, fought and died fighting the new American colonialists, perhaps the first US Visiting Forces in this part of the world. The first US “visiting forces”– 126,000 US troops according to American historians – invaded and defeated our Army of the First Republic of the Philippines led by General Emilio Aguinaldo.

Today, we are still the “bone of contention” of Big Powers, such as the United States and Japan including China, an emerging world power challenging US hegemony in this part of the world.

There are many dimensions to the South China Sea issue, but again the most important dimension to understand is to see it first of all through the security prism of the various stakeholder countries. For the US, the Philippines and Japan, altering the US-dominated status quo in the South China Sea threatens their conservative perception of “national security”. For China, NOT altering the status quo will potentially threaten China’s security in terms of its trading routes and key arteries for its supplies of energy and raw materials, as these will always be at the mercy of the ballistic submarines of the US Navy.

For the long future, there can only be more competition for resources and the question is whether it can be kept peaceful. We know that the great powers of the past achieved their aims through direct colonialism, wars of conquest, and inter-imperialist wars. China has propounded “peaceful development”, or “peaceful rise”, and “new type of great-power relationship” – to use their words precisely because, subjectively, it wants to avoid the old pattern of great-power conflicts and wars. To this day, unlike US and NATO, China’s diplomacy has tended to avoid overseas military conflicts or military intervention in other countries, and engages mostly in economic competition, using its accumulated financial clout to successfully win its bids for mining concessions in Afghanistan, or oil contracts in Iraq, for example. China’s leaders are certainly aware of the costly lessons of colonialism and wars, of which China itself is a victim. Hopefully, China can exercise more effective leadership so that its army of corporations and entrepreneurs expanding overseas will be guided by best practices (though there have been complaints in Africa as well as in the Philippines, as in the tainted NBN-ZTE contract during the former Pres. Gloria Macapagal-Arroyo’s administration).

Roland G. Simbulan is Professor in Development Studies and Public Management at the University of the Philippines. He is author of 8 books on Philippine-US security relations and Philippine foreig policy, and was Senior Political Consultant at the Philippine Senate. He is currently Vice Chair of the Center for People Empowerment in Governance (CenPeg), a public policy think tank in the Philippines.