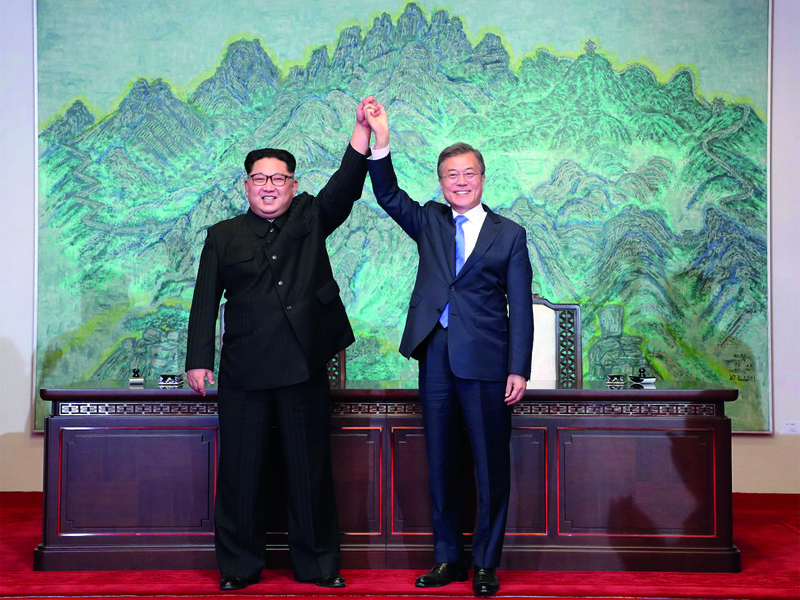 Peace – in the Koreas, is what the world expects; and Peace in the world is what humanity expects, the vast majority – 99.9% of the world population wants peace, but it’s the 0.1% that commands war and destruction, since war and destruction is what runs the western economy. Literally. If peace would break out – what we in the west still call economy, though it’s a fraud, every day more visible – would collapse. In the US the war industry with all the associated production and service industries, including the Silicon Valley and banking – contributes more than 50% to GDP. Nobody notices and nobody says so. Naturally. Everything that might be revealing and thought-provoking, is lied about or hidden from the public.

This enormous Korean Peace Initiative is a flare of hope. The two Presidents, Moon Jae-in from the South and Kim Jong-un from the North have met last Friday, 27 April 2018, at the Peace House at Panmunjeom, near the 38th Parallel North, or the so-called Military Demarcation Line. It is the first time in more than 60 years that leaders of both Koreas have crossed the line – Mr. Moon to the North, and Mr. Kim to the South. They have declared their willingness to establish Peace, to sign a real Peace Agreement before the end of this year. At present, technically the two nations are still at war – a war sustained by the United States. The DPRK survives from day to day on a shaky armistice agreement from 1953. The American ferocious military forces and those of their NATO allies have totally destroyed, bombed to rubble and ashes North Korea at will, killing one third of her population, between 1950 and 1953. US-NATO did this despite North Korea’s offer to surrender long before the country was but a heap of ruins. Killing for spite, indulging in and enjoying the causing of horrendous suffering and death, is the sadistic and satanic way of the west.

This must be said and never forgotten. Although we look forward now – we, the world at large wants Peace, a live peace experience of Korea which could be replicated. The two leaders promise a number of joint actions and undertakings, including ridding the Peninsula of nuclear weapons – a very ambitious plan. Not because the two are not genuine in their endeavor but will Washington with more than 30,000 troops stationed in the South and a fleet of navy vessels and aircraft carriers as well as fighter jets and bombers – and a nuclear arsenal – withdraw their murderous toys? South Korea is a sovereign nation, she could request the departure of foreign occupiers, what the US is – but will the occupiers leave? – Or will the Pentagon, CIA or the White House invent a false flag event to nullify this peace effort? – Nothing is beyond Washington’s evil intention to hegemonize the world.