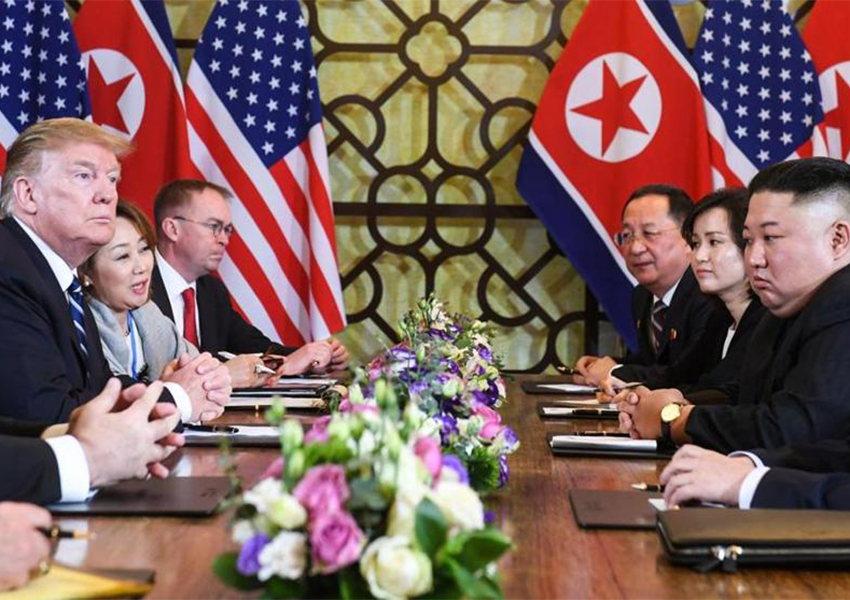 The author discusses the implications brought about by the failure of the U.S.-North Korea summit and its correlation to the actions that will be done by the U.S. government to establish global leadership.

The second summit between North Korea and the U.S. was a failure as it did not narrow the gap between the positions of the two countries. According to President Donald Trump, the timing of the hearing of Michal Cohen, Trump’s former personal attorney, before a House Committee, affected the outcome of the summit. While the timing of Cohen’s hearings was not necessarily an intentional plot to obstruct American compromises in Hanoi (it may have been that, though), it is possible to claim that the domestic pressures Trump must face make peace promotion and compromises very difficult for the U.S. The top adviser to the president of South Korea, Prof. Chung-in Moon, described1 Trump’s domestic pressures related to the second U.S.-North Korean Summit by saying that success in it could have caused “an uproar over a deal perceived as too conciliatory”

“The purpose of foreign policy is not to get along with other countries”, but rather “to shape the behaviour of others in ways that are consistent with your interests…” –Richard Hass

The situation where the president of the United States is being pushed to belligerence and toughness is unnatural. Normally, Americans, the media and the foreign relations’ bureaucracy try to tone down presidential temperament and demand the president to give peace a chance. Recently, however, President Barack Obama was forced to tolerate the continued existence of the illegal, violent detainment of prisoners of war in the Guantanamo Bay, while according to important media outlets Trump “became the president of the United States”2 only once he has conducted his punitive military operation against Syrian air force in April 2017. While peace demonstrators pressured President Nixon and his security political advisor, Henry Kissinger refused to implement his belligerent, aggressive order3 of a nuclear strike against North Korea in 1969, Trump must defend his efforts at “getting along” with other countries. According to a senior diplomat, Richard Haass, “the purpose of foreign policy is not to get along with other countries”4 but rather “to shape the behaviour of others in ways that are consistent with your interests…”

While developing good relations was considered the task of President Nixon, the exercise of aggressive dominant power is seen as the task of the United States under Trump. This orientation to international relations makes it very difficult for the American president to be constructive for world peace. It threatens America’s usefulness for global governance of stability in the world. South Korea’s presidential advisers have tried to make it easier for Trump to make compromises by designing a choreography that demonstrates success already at early stages of negotiation. Public photo events have been a highly visible part of this strategy of “frontloading peace dividend”. Still, it seems, making compromises is considered treacherous in the current American political culture. In this situation, Trump is left with the only option of demanding North Korea to do all the compromises and agree to a “final, fully verified denuclearisation”5, rather than accepting to exchange compromises in a gradual process. Naturally, this will not work in any negotiation process.

Only a gradual process towards better relations could build the trust needed for North Korean compromises. How else would North Korea feel safe enough to give up its nuclear second-strike capability if it still felt that the U.S. could strike first? How else could Kim Jong-un feel that his compromises could ease sanctions and reduce, rather than increase, the likelihood of a violent regime change in his country? If we look at systematic evidence6 of the experiences of economic pressure since 1914, we can see that even sanctions seem to work only if their sender is not perceived by their target as an enemy. Thus, for persuasion to work, Trump needs to develop better relations with North Korea. The two countries will need to get along well before North Korea can conclude that it no longer needs nuclear deterrence. Yet, this is precisely what the current American political culture cannot tolerate.

A leader that does not manage to address global problems, but instead, is a hindrance to solutions, will not be considered a global leader.

If the United States cannot be constructive in the Korean peace process, it fails its leadership role just as it has failed its leadership in the global effort to prevent climate change. A leader that does not manage to address global problems, but instead, is a hindrance to solutions, will not be considered a global leader. In this sense the power-centric, war-mongering culture that has contaminated American politics does not only threaten peace in Korea; it also threatens the American power position in the world. America cannot be great again, it cannot be a constructive force in the world, before its people, media and the political establishment allow American president to contribute to peace and let Trump try to get along with other nations.

Timo Kivimäki is Professor of International Relations, and Director of Research at the Department of Politics, Languages and International Studies at University of Bath. In addition to purely academic work, he has been a frequent consultant to the Finnish, Danish, Dutch, Russian, Chinese, Indonesian and Swedish governments.