Japan is reeling from the assassination of its longest-serving former prime minister, Shinzo Abe. He was campaigning for the ruling Liberal Democratic Party for the Upper House elections due on Sunday, in the city of Nara in western Japan, when he was shot from behind with an apparently home-made sawn-off shotgun. 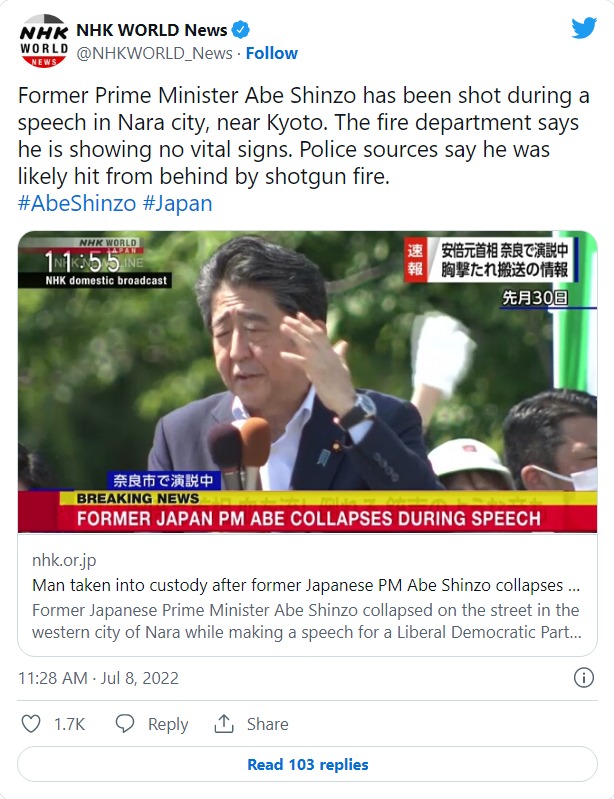 The alleged assailant, reportedly a 42-year old local man, was arrested at the scene. There is no known motive at this time, but there are reports the suspect is a former member of the Japanese Maritime Self-Defense Forces.

Abe was seen lying bleeding on the ground, before being taken by helicopter to a nearby hospital where he was later pronounced dead. 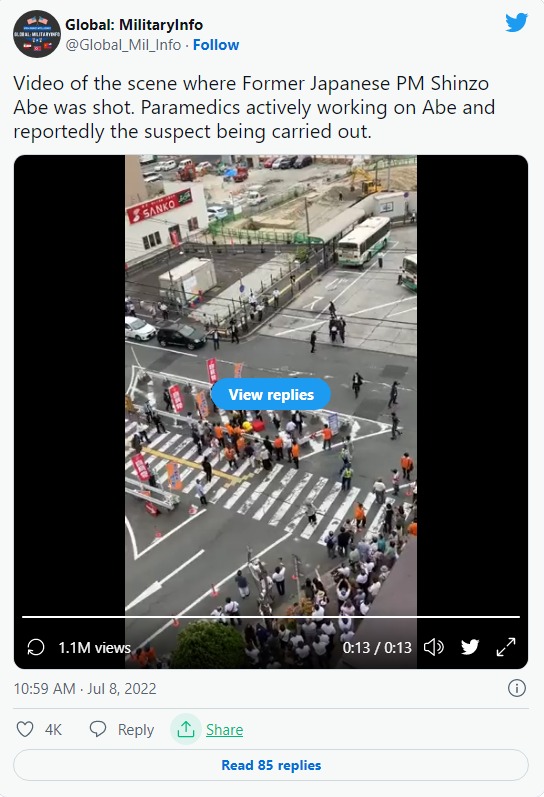 Political violence, and gun violence in general, is extremely rare in postwar Japan, so this incident has deeply shocked the Japanese public. Gun ownership is tightly regulated, and mostly restricted to registered hunters.

There have been occasional shootings by organised crime groups, typically targeting each other, but Japan has consistently had low rates of violent crime. 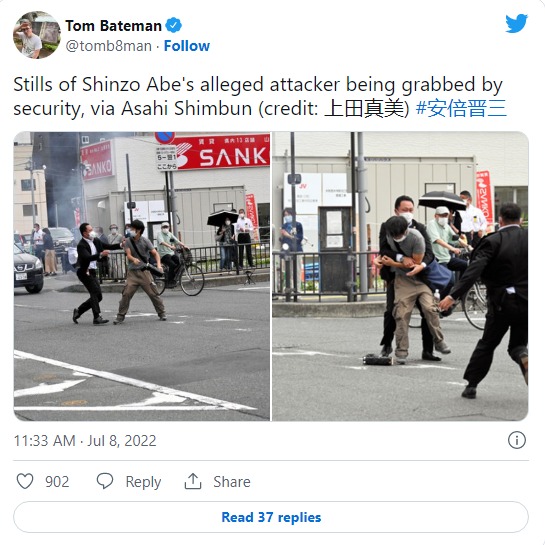 Far-right groups have been responsible for a few attacks on politicians in the postwar period: in 1990, the then mayor of Nagasaki, Hitoshi Motoshima, was shot and wounded; and in 1960 Inejirō Asanuma, leader of the opposition Japan Socialist Party, was stabbed and murdered.

In the pre-war era, democratic politicians found themselves subject to frequent attacks and intimidation by militarists. Prime Minister Inukai Tsuyoshi was murdered by Imperial Navy officers in an attempted coup on May 15 1932.

Abe, 67, is the grandson of former prime minister Nobusuke Kishi, and was a scion of the conservative Liberal Democratic Party, which has been in government for most of the postwar era. His first stint as prime minister lasted roughly a year, from 2006 to 2007, before he resigned due to ulcerative colitis following his party’s poor performance in the 2007 Upper House elections.

He made a remarkable political comeback in 2012, reclaiming the leadership of the Liberal Democratic Party and winning the general election that December. Abe won national elections in 2014 and 2017, entrenching his power over the weak and divided opposition parties.

He introduced his signature economic policy, “Abenomics”, based on massive deficit spending, quantitative easing and attempts at structural reform. However, twice raising the consumption tax undermined these attempts to lift the Japanese economy out of its decades-long stagnation.

A member of the ultranationalist lobby group Nippon Kaigi, Abe carried out a far-reaching transformation of Japanese foreign and defence policy, reinterpreting the pacifist Article 9 of the Constitution, to allow greater overseas deployment of the Self-Defense Forces.

His government increased defence spending annually, and in 2015 the Diet (the Japanese parliament) passed controversial security bills that allowed the Self-Defense Forces to participate in collective defence operations with allied countries, particularly the United States but potentially also Australia, India and the United Kingdom.

Abe originally raised the concept of the Quad security partnership between Japan, the US, Australia and India, and in 2016 formalised the phrase “free and open Indo-Pacific” as Japan’s main foreign policy goal to preserve the US-led rules-based liberal order in international relations.

His longevity in office saw him become one of the most experienced world leaders, and he used his foreign policy experience to steadily manage the US alliance, handling the erratic President Donald Trump through “golf diplomacy”.

Abe was able to maintain fairly stable relations with neighbouring China, Japan’s largest trading partner, despite the long-running territorial dispute over the Senkaku Islands (claimed as the Daioyus by China). Relations with South Korea remained poor, however, due to disputes over historical issues stemming from Japan’s colonial rule of Korea.

A member of the largest conservative faction in the Liberal Democratic Party, Abe’s dominance over the party and Japanese politics began to erode when the ruling coalition lost its two-thirds majority in the 2019 Upper House election. A long-running series of nepotism scandals also dented his public standing; investigations by public prosecutors led to charges against some of Abe’s associates and political staff, although Abe himself was never indicted.

While Japan coped fairly well with the COVID pandemic, largely due to cooperation with recommended health measures by the public, Abe’s government came under increasing criticism for a series of inept pandemic responses as the economy went into a sharp recession. Abe’s ill-health returned, and he resigned in August 2020, replaced the following month by his former chief cabinet secretary, Yoshihide Suga.

Abe remained in the Diet, and last year became the leader of the Hosoda faction, after backing his former foreign minister and current prime minister Fumio Kishida in the race to become the party’s leader.

In response to this tragedy, the Liberal Democratic Party has requested that its candidates cease campaigning, and opposition party politicians have also announced they will suspend campaign activities. 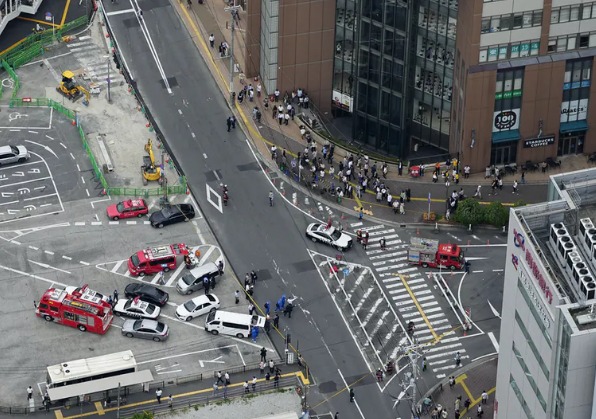 Kishida has returned to the prime minister’s office to monitor the situation, but at the time of writing, there has been no announcement about voting arrangements for the Upper House election, due to proceed on Sunday July 10.

In pre-election polling, the Liberal Democratic Party was expected to win a comfortable majority, in partnership with its junior partner, the Komeito party.

The 2022 Upper House election will now remain under the shadow of one of the most disturbing events in Japan’s modern political history.

This article was originally published in The Conversation on 8 July 2022. It can be accessed here: https://theconversation.com/shooting-of-shinzo-abe-is-a-huge-shock-for-japan-and-the-world-186640 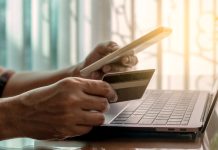