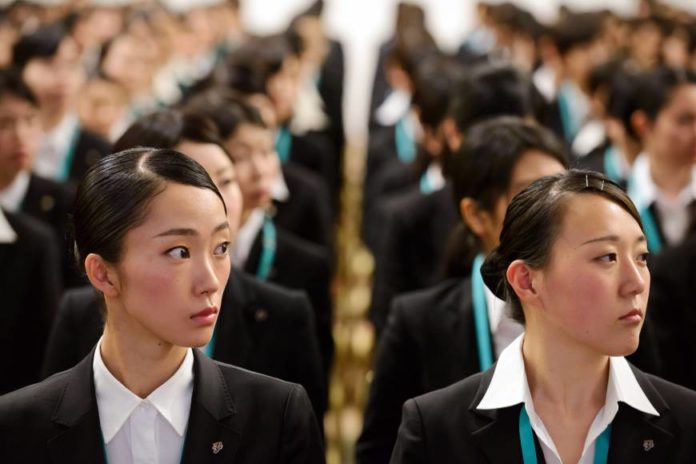 The new generation – or mostly known as the millennial generation – is the current age of workers in Japan, innovating ideas and changing their workplaces’ atmospheres. In addition, there are now more foreigners and seniors in the Japanese workplace unlike before.

Millennials leverage technology and collaborative digital tools to streamline and systemize their work.  Many millennials have watched their parents’ generation grow into managers, leaders and pioneers in their industries, and they want the same thing or a guide that lets them know that they can achieve this in their future career path.

Japanese millennials are now opting to apply and have a “job for life “over transferring companies and employers, potentially undermining the Bank of Japan’s efforts to stoke inflation and growth, according to a report from Bloomberg.1 These workers usually in their 20s to 30s, demonstrating a strong preference for job security and bucking the trend set by both their elders and members of their own working group overseas.

In the past decades, Japan’s employees are known to have endured overcrowded trains, submission to colleagues and salaries unrelated to performance. These days, Japanese companies are increasingly catering to the preferences of millennials.

According to Disco Inc.’s survey, a Tokyo-based recruitment information company, a total of 43.1 percent of the 455 respondents said they were “already acting to change jobs” or “considering changing jobs.”3

Among those actively searching or considering a new job, the average satisfaction rate with their current employers dropped to 57.3 percent from 72.7 percent when they entered. Some have complained about long overtime hours, low salaries and insufficient in-house training.

The country’s employment system is based on hiring new graduates all at once in March, and even hold job recruitment expos for it. Prior to that, students also engage in job-hunting activities so that they can secure employment by the time they graduate.

According to a ManpowerGroup survey, 37 percent of Japanese millennials expect to work for the rest of their lives, making their retirement expectations one of the lowest in the world.4

As the Japanese economy has experienced fluctuating recessions and booms, workplace issues, and lack of job security, millennials have a pessimistic feeling towards the economy making a strong return and creating employment opportunities for them.

As the population continues to age in Japan, millennials feel the need to support a larger number of older people in the country. Even though Japan has modern means of transportation, advancements in technology, lower crime rates and excellent public health services, millennials don’t have the security of employment that their parents and grandparents had before.5 This lack of job security has contributed to a more cut-throat competition in the job market which can lead to a decrease in motivation and optimism towards developing healthier work cultures.

A rise in foreigners and seniors

Japan is slowly yet definitely internationalizing. Its driving force is the demographic change, where the country’s population is ageing rapidly and shrinking. Now, there is a never-before-seen increase on foreign tourism, and the preparations for the 2020 Tokyo Summer Olympics, resulting in a country who is in desperate need of more workers to fill jobs.

Prime Minister Shinzo Abe currently wants to bring in more foreign workers. His highly controversial proposal to accept hundreds of thousands of people to fill blue-collar jobs by 2025 is still unaccepted by some as Japan is known to have traditionally shunned immigration.6

These foreign workers will be allowed to stay in Japan for five years under a framework that only covers five industries — agriculture, construction, lodging, nursing and shipbuilding.7 They are also required to pass a test, demonstrating their proficiency and expertise in the field and the Japanese language.

The proposal will make solutions to the severe labor crunch in the country while creating jobs for foreign workers, which have been limited to highly specialized positions due to concerns of an influx of immigrants and increase in crime.

Japan’s government accepted that proposal in an unprecedented move to let in more immigrant workers than ever before – 300,000 throughout the next five years.

People working into their 70s and beyond will add a new facet to its reputation as a nation filled with an extreme workforce. PM Abe seeks to keep citizens in their senior age employed longer so they can help with the tax base and ease the burden on government spending, as the Japan keeps up with the world’s fastest aging population.8

This population has surged in social security spending, accounting for about one-third of government outlays in the fiscal year that ends in March, some of which were funded by debt. Hence, Abe is advancing legislation to encourage companies to abolish retirement ages and develop measures and policies to keep people on the job past the age of 70.

The government is also considering a new option of allowing workers to delay their pension payouts to age 75. Only about one percent of the eligible population taking advantage of the existing option, under which they can delay up to age 70 in return for a more than 40 percent increase in payments.9

A higher percentage of Japan’s population compared to the rest of the world is aged 65 or older, and their life expectancy at birth of 84 is tied with Switzerland for first place, according to a World Bank report.

A Call for Employment

Japan expresses an urgent need for employees in sectors like construction, agriculture and ship-building, all over the country. The hospitality and retail industries that require English and other language skills from future applicants continues to boom as tourism increases along with it.

Nursing and homecare workers are also needed to care for the growing graying population. According to a BBC report, if PM Abe’s proposal pushes through, more than 345,000 foreign workers are expected to come to Japan to fill those roles across all these sectors in the next five years.10

PM Abe also wants to allow low-skilled workers to stay for five years, and to introduce a renewable visa for skilled workers that would allow them to bring their families to Japan.

Critics of the plan fear it could provide an easier path to permanent residency, furthering the controversy of the proposal. They also expressed concerns that foreign workers would be the cause of crowded cities and pollution, and would choose not to live in rural areas where they are needed the most.

Either millennials make up for most of the Japanese workforce or foreigners and seniors, this will be the new normal for a Japanese work environment and the country should be able to adapt to the changes.

Feature image: Not a chapatsu in the place: New recruits for Seven & I Holdings Co. attend an initiation ceremony in Tokyo, with nary a lighter-hued hair in sight. April marks the start of many young people’s working lives in Japan. | AKIO KON / BLOOMBERG