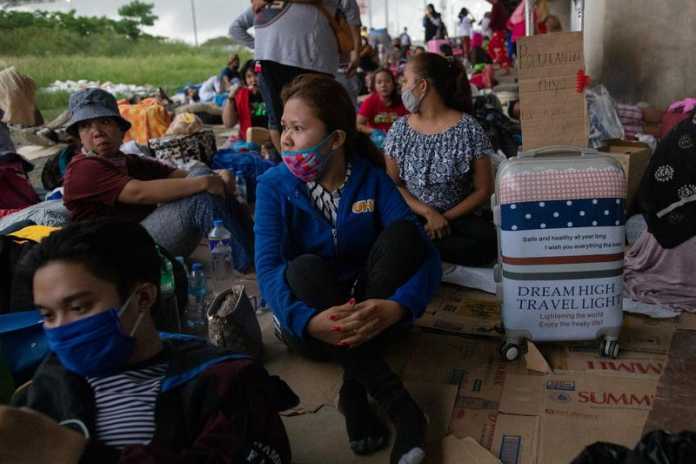 Mobility regimes have for a long time enabled overseas Filipino workers (OFWs) to harness new capital and boost development back home. But amid the ongoing COVID-19 pandemic, the precarity of these workers’ lives has been made all too clear. Both land-based and sea-based OFWs are among the hardest hit by this tide of unemployment.

For the Filipino labour migrants who remain abroad, many of them suffer from income loss due to the ‘no work, no pay’ scheme. Border closures and lockdowns are common, resulting in restrictions on movements that affect labour schemes. Although the direct effects of these restrictions — foremost being the loss of income — may be temporary, the employment gap can generate secondary impacts that could outlast the pandemic and create various forms of insecurity.

A job loss not only affects an OFW but also their family. The First Quarter 2020 Consumer Expectations Surveyindicates that 94 per cent of OFW households allotted remittances to food and other household needs, 67 per cent to education, 51 per cent to medical expenses, 45 per cent to savings, 23 per cent to consumer durables and 17 per cent to debt payments.

Looming prospects for repatriation compounded with the possibility of contracting the virus is also a source of depression for OFWs. Undocumented and irregular migrants — and those who work in informal sectors — are more vulnerable to the risks of COVID-19 due to inadequate access to healthcare and already crowded living conditions. Many are entangled in poor working conditions.

More explicit provisions of employment protection and social safety nets need to be offered in both migrant-sending and migrant-receiving countries. Previous crisis situations — especially the Gulf War experience that resulted in the biggest repatriation of OFWs prior to COVID-19 — caused the Philippine government to craft a crisis framework. This includes the mandated foreign employers and companies’ contingency plan for OFWs in times of crisis, repatriation assistance as enshrined in the Migrant Workers and Overseas Filipinos Act of 1995, and the Joint Manual of Operations in Providing Assistance to Migrant Workers and Overseas Filipinos produced by various Philippine government agencies.

But unlike previous epidemics such as SARS, Ebola and MERS where the impact was geographically contained, the Philippine government is confronted with the formidable challenge of assisting OFWs scattered across the world. The pandemic requires not only a whole-of-government approach but also of a whole-of-nation approach. It is within this ambit that Philippine President Rodrigo Duterte raised the COVID-19 Adjustment Measures Program in his 2020 State of the Nation Address.

The Philippine government has already extended some financial assistance to displaced OFWs through the DOLE-AKAP initiative. But at US$200 per worker, this aid may prove to be insufficient in the long-term considering that the lockdown has spanned for months and prospects for employment are uncertain given the economic recession. Other long-term means of relief — such as the Department of Labor and Employment’s Displaced/Disadvantaged Workers (TUPAD) program — need to be maximised, as such programs target employment generation and not merely cash assistance.

In migrant-receiving countries, the Commission on Human Rights has urged Philippine diplomatic missions to provide unconditional opportunities for OFWs to register their grievances, especially before they are repatriated. Policies encouraging OFWs to undergo retraining and reskilling instead of repatriation have to be promoted. The Philippine government needs to leverage its diplomacy to attract the best deal for OFWs and avoid resorting right away to providing livelihood programs for repatriated OFWs.

In better days, OFWs have been lauded for the economic boost they inject into the Philippine economy despite the social costs they endure abroad. Effective and swift labour migration policies and programs could be the best demonstration of a renewed appreciation towards these worker heroes. Long-term recovery measures show that the migration-development nexus is not only about seeing migrants as instruments and objects for development, but first and foremost as human beings in need of protection amid the crisis.

This article was first published on East Asia Forum and is part of an EAF special feature series on the novel coronavirus crisis and its impact.

Maria Pilar Lorenzo is a PhD candidate of Social Sciences at Ghent University.

How to Manage Resident, Owner & Vendor Portals with PMS?