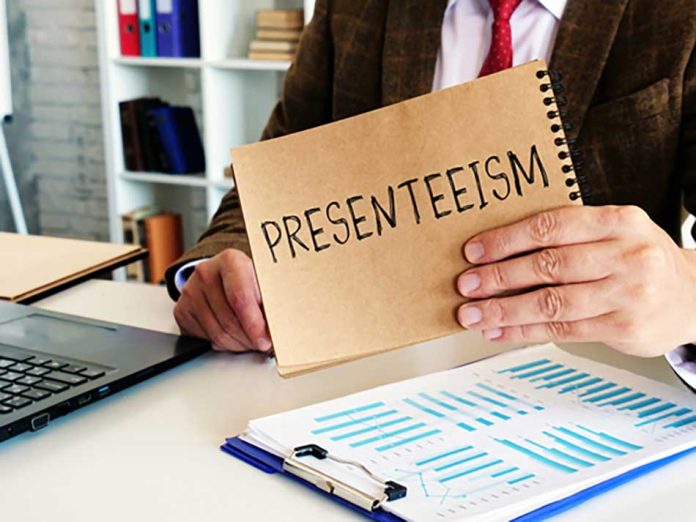 Despite the pandemic throwing attitudes towards working whilst unwell into sharp focus, presenteeism in the workplace is still increasing, costing employers huge amounts of money.

Deloitte found that the cost of poor mental health of employees had risen from £42 billion in 2017 to £45 billion in 2020 – mainly due to the rising rates of presenteeism. According to other research, around 35 workdays in the UK are lost per worker every year to presenteeism.

Apart from the cost to businesses, there is also a high cost for the employees themselves. Presenteeism, if left to fester, can cause a toxic work environment where stress and overworking are not only rife but seen as a sort of badge of honour amongst employees.

Presenteeism can also hide other problems amongst workers, including poor mental health and burnout, which will lead to even more problems in the long term, such as increased staff turnover and prolonged absences.

With some insights from Vicky Walker, Director of People at Westfield Health, we’ll discuss what presenteeism is, why it’s so common, and how to spot it in your employees.

Briefly, presenteeism in the workplace is when employees show up to work but are not productive due to mental or physical health problems that prevent them from doing their job.

It’s commonly associated with the idea of being ‘chained to your desk’ and showing up no matter how poor you feel because it’s perceived to reflect well on your character.

Why is it common in the workplace?

Some research suggests that unconscious bias in managers plays a part in presenteeism, which may cause them to favour workers who show up early and leave late. This is partly down to the ‘mere-exposure effect’, a psychological phenomenon suggesting that just being in the office and around other people will help employees build stronger rapport with their co-workers and thus be more likely to get raises. The ‘halo effect’ further contributes to this, which is the idea that being present and talking to colleagues leads them to make the mental link that the employee must also be a hard worker and deserving of rewards.

For the employees themselves, it can also be common to harbour an ingrained fear that a lack of physical presence in the office will harm their prospects. Predictably, this disproportionately affects younger workers and those in junior positions who feel more pressure to prove themselves.

How is hybrid working affecting presenteeism?

Rather than putting a stop to presenteeism, the rise of hybrid working has only moved it out of the office and online instead. In fact, the CIPD’s 2022 Health and Wellbeing Survey discovered that levels of presenteeism are higher for employees who work from home (81%) vs those in a workplace setting (65%).

This is due to many employees feeling like they need to be available whatever the time and answer emails or work messages long past the end of their working day. According to a 2021 NordVPN Teams survey, UK workers have increased their working week by 25% since before the pandemic, logging off at around 8 pm each evening. Other research found that in 2020 almost a quarter of UK workers felt that they had to go out of their way to prove that they were working every day, with many taking fewer breaks (15%) or no breaks at all (12%).

The longer work hours have contributed to heightened stress levels amongst UK workers. Between 2020-1, the Health and Safety Executive (HSE) reported that 822,000 workers were suffering from work-related stress, anxiety, and depression. The ‘always-on’ culture of working online has only enabled presenteeism and continuing to work despite worsening mental health.

How do you spot presenteeism, digital or otherwise?

There are many warning behaviours to watch out for that will point towards presenteeism.

If one employee displays presenteeism, it can spread to their co-workers as they feel the pressure to be present as well, which can soon affect the whole workplace and create a stressful environment. For example, if employees respond to a colleague taking a day off sick with the insinuation that they’re overplaying their illness or are ‘weak’, it could be a sign of a culture of presenteeism that urgently needs addressing.

How can you help your employees?

As a business owner or HR Manager, investigating why presenteeism is occurring in your workplace is the best place to begin.

You should commit to a top-down evaluation of what’s important in your workplace and look into ways to measure productivity outside employees’ physical presence, for example, through tangible outputs or whether your employees are completing their work on time.

When taking active steps to stop it, health and well-being need to be a top priority. Employees should be able to feel comfortable admitting if they’re struggling or need time off for their health. Managers should lead by example, ensuring to log off on time and not send emails or messages to colleagues outside work hours. Demonstrate to employees that help can be available when they need it through implementing workplace well-being services, especially for those who work remotely. Recently, some companies in the UK have also been trialling a four-day to discover whether it can boost productivity and improve well-being. So far, the trial is showing positive results, with 95% of the companies reporting either the same or improved levels of productivity.

Creating a healthy and happy workplace is vital for your business’s long-term goals. It will not only improve productivity and reduce costs incurred through presenteeism, but it will also help your business to attract and retain employees, and result in better outcomes as a whole.