Recent concerns about peso’s depreciation have been exaggerated. In the most dangerous international environment since the postwar era, there is no room for complacency, however.

In the past, international and domestic critics of the Duterte government have complained that the Philippine peso has fallen “six straight years,” which is seen as a sign of the failure of Duterte agenda.

In March 2017, Bloomberg reported that “Asia’s ugly duckling of 2017 is the peso, thanks to Duterte.” At the time, peso’s weakening was explained, oddly enough, by investors who had been spooked by allegations of “unlawful killings and corruption.”

More recently, the peso is said to face an additional threat, “a mid-term election that may compound concerns about its economy.” This time Bloomberg believes that “political uncertainties” pose an added source of pressure.” Yet, recent surveys do not seem to support such speculation.

Still other reports see “political risks” where such do not necessarily exist, while approaching the peso’s weakening as if it was fueled by mainly internal forces.

In reality, most currencies in emerging markets have depreciated since first expectations that the U.S. will start rate normalization and when the actual rate hikes began – about “six straight years” ago, well before Duterte (Figure). 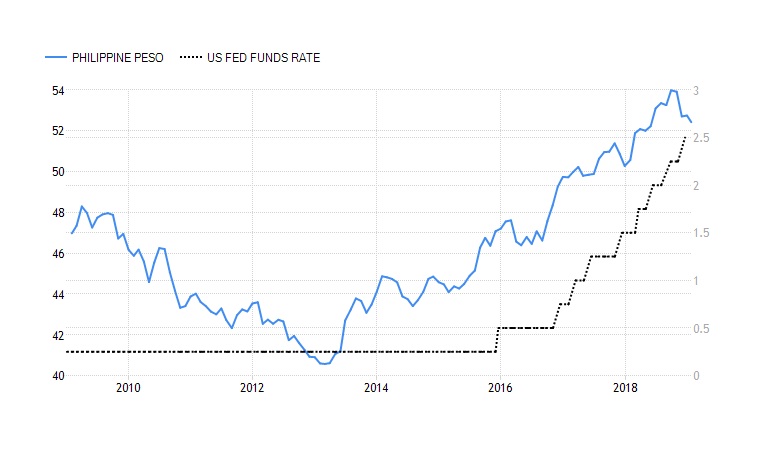 Since the Fed’s signaling of normalization and rate hikes, Philippine peso has depreciated almost in parallel.

A series of well-known forces have fueled recent peso depreciation. In the fall, inflation reached an intolerable high of 6.7%. It was boosted by a price effect associated with tax reforms (TRAIN), rising oil prices and a failure to manage rice prices. Accordingly, Philippine peso depreciated until early October.

Yet, the pressures that have been associated with overheating are likely to weaken in 2019 as the TRAIN-related price pressures should ease in the coming months.

Also, the slowing international economy has penalized oil. Crude oil exceeded $75 in early October but is now around $55 (a U.S.-Sino trade compromise could contribute to rising prices again, however).

In the past, the quota system failed to keep rice price in control; the new import tariff system should stabilize it.

Moreover, high loan growth has made some observers uneasy. While it is associated with the infrastructure drive, it has to be monitored.

Most importantly perhaps, some observers feel uncomfortable with current account deficit (CAD). Yet, the widening CAD is the effect of the infrastructure drive. It has been expanding as a result of imports, which support infrastructure development.

Furthermore, the slowdown of electronic exports, which account for more than half of Philippine exports, is hardly a domestic challenge. U.S. trade wars have undermined the recovery of world trade. However, there are some possible new shifts in the international horizon.

Last year, the tighter dollar, boosted by the Fed’s rate hikes, went hand in hand with tighter financial conditions. That is no longer the case. Also, last year Trump’s tax cuts gave a one-time high for the U.S. economy. But now U.S. growth may have peaked.

Accordingly, the prospects of slower growth and lower inflation may have made the Fed less hawkish.

Nevertheless, the international environment, including U.S. trade wars, poses more threats than ever since the postwar era.

If the U.S.-Sino trade truce paves way to a compromise by March 1, world demand may improve. But if the tensions spread as they did last year; world demand is likely to further deteriorate. And even if trade compromise can be found, tensions are likely to linger in the technology sector.

Moreover, the White House may target the ASEAN in its trade wars, as it has suggested since mid-2018.

In 2018, the Philippines expansion amounted to 6.2%. Although inflation did penalize the government’s downwardly-revised goal of 6.5 to 6.9%, the country is one of the fastest growing economies in Asia and relatively well-positioned to absorb shocks. Moreover, the Bangko Sentral ng Filipinas

Yet, the status quo permits no complacency. The inflation-induced reduction of the country’s economic growth in the fourth quarter of 2018, which penalized the annual figure, should serve as a warning sign for a belated 2019 budget passage.

Even if a re-enacted budget were to be passed now, the infrastructure programs that are of critical national importance cannot proceed until after the mid-year. That, in turn, has potential to harm the current year’s economic growth, once again. Time is money. Consequently, a rapid 2019 budget passage is vital.

The Duterte fiscal expansion has potential to continue well into the early 2020s, which bodes well for economic growth – as long as political impasse does not penalize economic progress.

The original commentary was released by The Manila Times on January 28, 2018 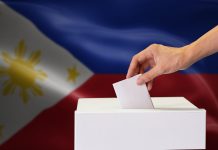 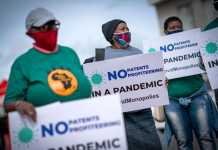 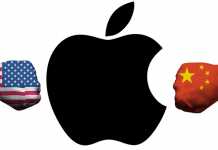 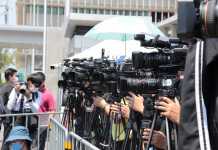 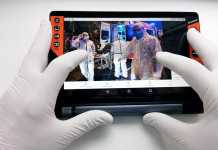 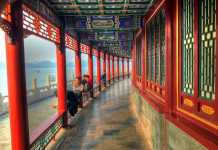