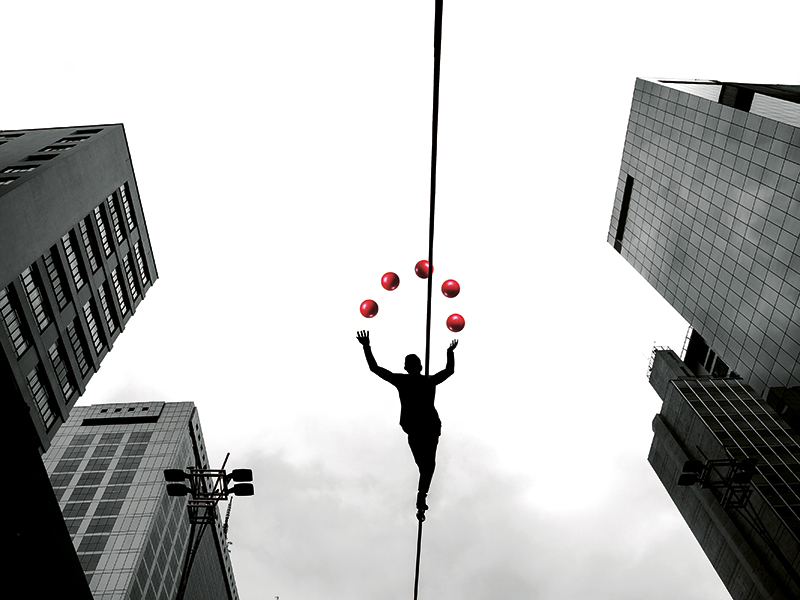 In every relationship, trust plays a valuable role to ensure that both ends are not met with infidelity and injustice. Successful companies for that matter compel their employees to apply trust and control on a proportionate rate to deliver just that.

Trust matters to organisations in important ways. The presence of trust has been demonstrated to affect a wide range of variables at both the individual and organisational level, which all combined promote the overall effective functioning of any organisation (Kramer, 1999). For example, when employees trust each other they will report higher job satisfaction, display more voluntarily citizenship behaviours, exchange information more quickly and frequently, and experience greater well-being and happiness at the work place. Organisations in turn benefit from such highly motivated and effective employees, as companies that are effective in fostering a trusting work culture perform better, create more revenue and ultimately lead their industry by being innovative (Colquitt, Scott, & LePine, 2007; Dirks & Ferrin, 2002). If trust has so many benefits, why is it then that so few companies really succeed in establishing a trust culture?

As we all know, organisations are complex hierarchical structures that create frequently conflicts of interests and feelings of fear to be exploited. Trust is commonly defined as people’s willingness to be vulnerable to the actions of others, because they consider the intentions of the other to be honest and caring about interests of others (Rousseau et al., 1998). Many organisations will therefore try to control the complexity of their work setting for trust to blossom. But it is exactly in this effort to try to control the self-interest of employees and coordinate efforts in more transparent and accountable ways that trust may be more difficult to achieve than ever. Why?

It is no secret that people do not like to work in uncertain business settings. The human desire to reduce uncertainty is known to be pervasive and the recent decade of corporate failures and crises has translated this desire into a cry for increased transparency across different industries and work cultures. In most cases, fear dominates and as a result creates work places where one tries to install a sense of control among its employees by employing monitoring systems. Although companies may engage in these practices, few of them are actually able to install a culture of trust where employees are not afraid to be vulnerable to each other. From a rational point of view this may make little sense. If decision-making is made transparent and control systems exist that can punish bad behaviour (and if needed reward good behaviour) then the work place should be considered as a safe environment and voluntarily cooperation should prosper. Research however shows that when control systems are implemented, employees may indeed cooperate but not because they intrinsically trust the others but more because of an induced extrinsic type of trust. This extrinsic type of trust is also referred to as the trust people have in the control system itself and the consequences it reveals, but it does not include trusting the intrinsic intentions of the others. Specifically, employees will cooperate with others and trust them to deliver because they know that else they will be punished by the control system. This kind of trust is installed when a control system is implemented, but will also disappear quickly once this system is removed. Once a control system is removed, employees will not intrinsically trust others, because the reason why they trusted others initially is not in place anymore (Mulder, Van Dijk, De Cremer, & Wilke, 2006). Indeed, if the system is gone there is no reason anymore to trust others.

The presence of trust has been demonstrated to affect a wide range of variables at both the individual and organisational level.

Another effect that emerges in the presence of a control system is that the increased transparency and accountability makes people feel uncomfortable. We know from much research in psychology and behavioral economics that people are not 100% rational beings. Rather than optimising their behavioural strategies and decisions based on the knowledge that they have, human emotions can disrupt logic and systematic processing of data in ways that may lead them to behave in ways that cannot be predicted by rational models. This is also the case when it comes down to working in transparent work settings. If transparency is established then everyone knows what and how everything is happening. From a rational point of view, one could then say that such an optimal situation of knowledge gathering should motivate employees more to contribute their ideas, knowledge and efforts to the organisation. However, when asked, most people will say that they do not like or even simply refuse to work in a completely transparent setting. So, rather than seeing employees become more loyal and motivated to contribute to the company, we notice that enhanced transparency actually leads employees to take a distance from the company as they feel more stressed and uncomfortable in dealing with such controlled work environment.

What is the result of companies focussing primarily on control strategies to enhance their trust beliefs about their employees? By promoting transparency on the work floor and as such being able to monitor the decisions and actions taken by the work force, does not lead to more trustworhy behaviours within the company but actually to less trust when employees work together. Does this indicate that monitoring systems are always bad news when it comes down to promoting a trust climate within the company? Not necessarily. As we noted earlier, when employees know that their actions are being monitored (as transparency is high), they will be confident that they can work together with others as exploitative behavior is very likely to be punished by the company (via its control systems). However, this extrinsic type of trust is not sufficient to build trust in a sustainable manner. The primary reason for this is that monitoring and control systems in organisations are usually employed in ways that reinforce the perception among employees that the control system is an end in itself and not a means towards an end. What does this mean? Too often companies do not explain well why they employ a control system and in what way and for what purpose they will use the data gathered via a transparent system. It is especially the lack of explaining the purpose behind the control system that creates an ambiguous situation about the reason for the control system and hence the real intentions of the company. It is human nature that in ambiguous situations, people are more inclined to interpret the situation in more negative rather than positive intentions. As such, employees will not give the company using a control system the benefit of the doubt and be more likely to conclude that the control system exists because the organisation does not trust its employees and therefore control is the ultimate purpose or an end in itself.

If trust however is so important to the performance of organisations, is having oversight over one’s workforce and being in control of important decisions then always a bad thing? Of course not. Control and trust can go together, but it is important to know that trust and control are not the same thing. Trust is good and control can be good, but only if used wisely. This implies understanding only control will not reveal trust and trust on its own will not promote optimal performance. To achieve this kind of balance requires a company culture that actively tries to promote insights into human nature and motivation and integrates those insights in the efforts of the organisation to make more transparent and monitoring systems acceptable to employees without damaging their intrinsic motivation to establish trusting relationship with the others and the organisation as a whole.

David De Cremer is provost chair, professor of management and organisation at National University of Singapore (NUS) Business School, a fellow at the University of Cambridge, and a fellow at the Hoover Institution at Stanford University. Before moving to NUS he was the KPMG endowed professor in management studies at Cambridge Judge Business School. He has published over more than 250 academic articles and book chapters and is the author of the book Pro-active Leader: How to overcome procrastination and be a bold decision-maker and and co-author of “Huawei: Leadership, culture and connectivity.”