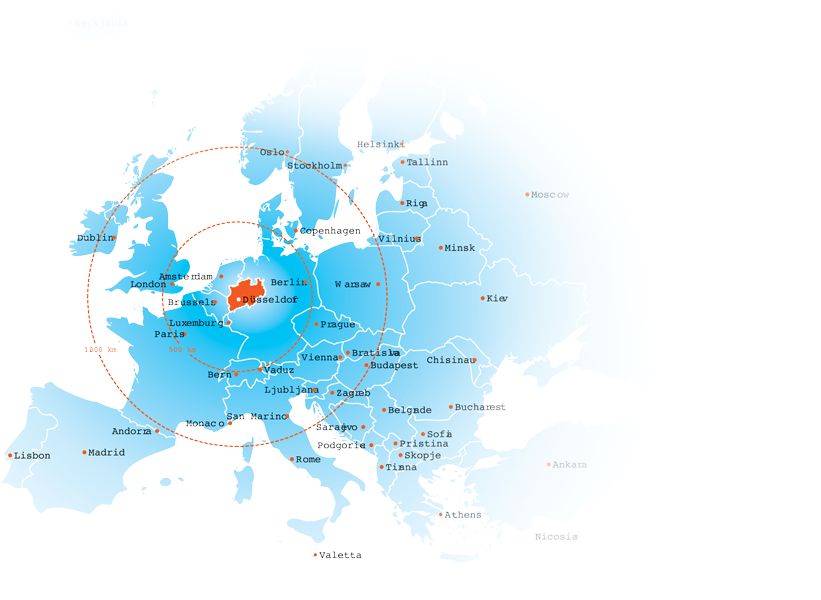 North Rhine-Westphalia, Germany’s economically strongest federal state, has proven to be a particularly attractive investment location for foreign companies in Germany and Europe for many years. The successful location performance record in 2011 shows once again: “Germany at its best: Nordrhein-Westfalen“.

North Rhine-Westphalia attracts more than a quarter of all foreign direct investments (FDIs) in Germany. In comparison to the 16 German federal states, North Rhine-Westphalia has established itself as by far the leading business location for companies from all over the world. More than 13,000 foreign firms are now at home in the Rhine and Ruhr regions. These include such global players as 3M, BP, Ericsson, Ford, LG Electronics, QVC, Toyota and Vodafone, as well as numerous small and medium-sized enterprises.

Whether it is the US online retailer Amazon opening a 110,000 m² new logistics center in Rheinberg in the Lower Rhine region, or the Dutch company Royal Philips investing 40 million euros in an OLED production facility in Aachen, foreign direct investments contribute to the dynamism of North Rhine-Westphalia as a business location. However, smaller locations also generate important stimuli. At its new Bochum location, the Japanese robotics company CYBERDYNE is testing its robot suit HAL© together with the University Clinic Bergmannsheil for the German healthcare market. The Russian firm Bionanoscopy, a manufacturer of scanning probe microscopes and atomic scales, set up business at the Münster Technology Park, where it wants to further develop and market its technology. Foreign investors bring new products, services, processes and innovations into our state, thereby providing important stimuli for our economy.

Location cases on the increase

And the location trend is rising – in 2011 a total of 234 foreign investment projects came to North Rhine-Westphalia. More than half of these received support from NRW.INVEST, the state’s economic development agency. Last year, NRW.INVEST successfully assisted a total of 140 companies with their locations or expansion investments. The companies receiving support created approximately 2,700 potential new jobs in North Rhine-Westphalia with their projects.

“Despite a difficult environment NRW.INVEST has succeeded in further improving North Rhine-Westphalia’s
already good position as the investment location for Europe,” explained Harry K. Voigtsberger, Minister of Economic Affairs, Energy, Building, Housing and Transport of the State of North Rhine-Westphalia. Since 2006, the state economic development agency has almost doubled the number of foreign investment projects.

The locations of Asian companies accounted for a large proportion of the projects supported by NRW.INVEST. Compared to the previous year, this number was increased by a fifth. In 2011, a further heavyweight of the Chinese construction machinery sector, Xuzhou Construction Machinery Group (XCMG), relocated to North Rhine-Westphalia in January 2011. The corporation is investing 50 million euros in a new research and development center in Krefeld, where up to 100 new jobs will be created within the next two years. In September 2011, NKB Technovations India established its first foreign branch in Düsseldorf, NKB Technologie GmbH, via its subsidiary AUTOMAG, a supplier of conveyor equipment and material handling systems. The company provides conveyor solutions for all production and intralogistics areas, as well as engineering services ranging from planning and project management to the construction site supervision of conveyor systems for industrial enterprises. NRW.INVEST had already made contact with NKB Technovations India in Pune in 2010 to promote North Rhine-Westphalia as a business location. The decision-making and location process took less than two years.

The number of assisted investment projects from Western Europe also took a leap from 8 to 17 last year. Germany’s strong economic development in 2011 evidently serves as a bonus for the location in this respect: While the domestic markets showed weak development, investors from Western Europe hoped for better sales opportunities in Germany. These included GYS GmbH, a French company specializing in inverter welding machines, battery service machines and car body shop equipment. The company invested approx. 3.5 million euros at its Aachen location in order to expand its administration and logistics capacities. With this new investment GYS has increased its workforce to 60 in the medium term. Another western European company which found its way to North Rhine-Westphalia in 2011 with the help of NRW.INVEST was the Patton Group from Northern Ireland. The specialist in interior fit-out for retail stores, hotels and museums opened a sales office in Düsseldorf in March 2011, as Patton Group Deutschland GmbH. In its first phase, 15 new jobs have been created here.

“We convince investors in particular as a location for distribution, logistics and research and development because here we have the know-how, outstanding logistical conditions, strong industry expertise, sufficient sites and qualified employees,” emphasizes Petra Wassner, CEO of NRW.INVEST.

“We convince investors as a location for distribution, logistics, research and development because here we have the know-how, outstanding logistical conditions, strong industry expertise, sufficient sites and qualified employees,” Petra Wassner, CEO of NRW.INVEST.

At the beginning of August 2011, the Canadian IT company Miovision Technologies opened its German and European headquarters in Cologne. Established in Waterloo, Ontario, the firm specializes in automated traffic data collection. Miovision develops video and web-based data collection systems from traffic streams which merge centrally. This helps traffic planners to reduce congestion and hence contribute to the improvement of traffic flow. The main customers are state and district governments, municipalities with 40,000+ inhabitants, and engineering offices. From its Cologne base, the company is initially serving the entire German and European market with a staff of ten. NRW.INVEST follows a clear strategy in its location marketing and the acquisition behind it. “We want to win investors who provide additional stimuli for the state with their location. That is why we focus consciously on key future topics,” says Wassner. Since autumn 2011 the state economic development agency has been employing the topic “Energy Turnaround” to promote the location with events in Japan and China. “We received extremely positive feedback at our events, and that is why we want to continue along this path in 2012.”

The marketing and acquisition strategy of the state economic development agency received two awards last year. In December 2011, Japan’s leading financial and business newspaper, Nikkei, conferred the Nikkei Advertising Award on a typographic advertisement from the new location marketing campaign “Nordrhein-Westfalen: Germany at its best”. Since 1952, Nikkei has honored outstanding advertisements that reflect the zeitgeist in a special way, or highlight trends for the Japanese economy. This is the first international accolade of this kind for the state of North Rhine-Westphalia.

In addition, the London-based trade journal for foreign direct investments, fDi Magazine, awarded a prize to North Rhine-Westphalia for the best marketing and acquisition strategy in Europe. Every year, fDi Magazine prepares rankings of the most attractive European regions and cities for direct investments. The subsidiary of the renowned Financial Times awarded the prizes in different categories as well as for the overall ranking.

North Rhine-Westphalia was commended as the European region with the best marketing and location strategy. The state came first ahead of the northern Spanish region Catalonia and the Copenhagen region.

In March 2012, during the MIPIM in Cannes, Europe’s leading real estate trade fair, NRW.INVEST accepted the award for the best marketing and acquisition strategy in Europe on behalf of the state of North Rhine-Westphalia. “First place for the best marketing and acquisition strategy is excellent confirmation of our many years of work, particularly for our location marketing campaign. We regard this top ranking as a challenge to continue to perform well in location competition in the future,” says Wassner.

North Rhine-Westphalia was commended as the European region with the best marketing and location strategy. The state came first ahead of the northern Spanish region Catalonia and the Copenhagen region.

A jury consisting of leading fDi Magazine journalists and other business experts assessed the European regions and their location efforts. In doing so, they analyzed different marketing strategies. Besides the performance of the regions, investor incentives such as the marketing, quality and availability of commercial sites and real estate played an important role. The insightful presentation of sectors, growth potential and interesting niche markets also flowed into the ranking. To this end, fDi Magazine drew on facts and figures from the years 2011 and 2010.

In the overall ranking, North Rhine-Westphalia occupies seventh place, putting it well ahead of all the other German regions. All in all, the fDi survey results show that Europe has established itself worldwide as a top region for foreign direct investments. However, as a consequence of the debt crisis in the southern nations of the European Union there are shifts in investment behavior. In the competition for investors, northern and western European regions such as North Rhine-Westphalia are gaining, while regions in Italy, Greece and Portugal have gone down in the rankings.

NRW.INVEST: The one-stop agency for investors