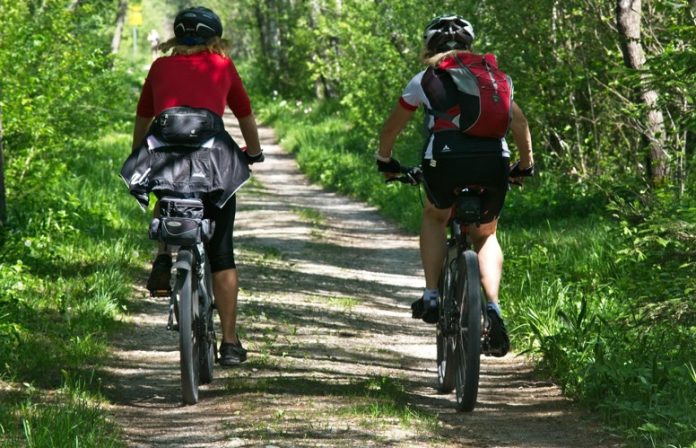 The majority of us are already aware of the positive effects that biking has on our environment and health, but did you also realize that biking can help the economy significantly? There is a deluge of information demonstrating the vital role that bicycles play in a healthy regional and local economy. Rural towns can benefit greatly from mountain biking and mountain bike facilities. They make the most of a community’s natural resources to develop areas that are appealing to tourists, businesses, and both potential and current residents. Benefits that can be specifically identified include improvements to locals’ health, more potential for tourism and economic development, and environmental advantages.

According to research conducted for the League of American Bicyclists, the bicycle industry supports over 1 million employees, generates over $18 billion in tax revenue, and contributes $133 billion to our nation’s economy.

Riders frequently go to distant locations for riding on mountain bike trails. This implies that bikers spend money on things like food, beverages, clothing, lodging, and park passes, and the list continues on.

Not only local riders, but riders from all over the country folk together in places with the best biking facilities in groups on various occasions to keep up with their biking communities. So not only does cycle tourism earn money from locals but also from people all over the country. An NCDOT study found that daily spending by bike tourists in North Carolina alone averages $190.

2. Investing in Bike Lanes is a Fantastic Idea

Consider this in 2003, NCDOT spent $6.7 million enlarging bike lanes and improving off-road pathways in the northern Outer Banks. Because of a rise in bicycle activity, the region started taking in much greater than $60 million annually after ten years.

If we condense this investment to the figures we are familiar with—a $6.7 million installation cost, a 10-year lifespan, and a total income of $60 million—we find that the return on taxpayer money—measured in terms of money spent in the Outer Banks—was 791% over the course of the investment’s ten-year lifespan or 23% per year.

There is no chance behind this. Infrastructure for bicycles is a wise investment.

When “temporary” bike lanes were installed on Broad Avenue in Memphis, Tennessee, in 2010, business activity and bike riding virtually doubled overnight. Since then, the road’s companies have seen annual revenue growth of roughly 30%. You can find similar outcomes by looking at a case study for any significant U.S. city that has invested in bike infrastructure.

Bicycle lanes reduce traffic flow. When cars are traveling at 10 mph compared to 45+ mph, more visitors see your storefront and can smell your merchandise.

According to a 2018 survey, bikers in London spent 40% greater at small businesses than drivers of cars. This provides solid support for observations that have been made in other smaller towns around the globe.

On their daily commute, cyclists typically spend more money than drivers of cars do. This makes sense because cycling requires more frequent shopping due to the reduced carrying capacity, and locking your bike up in front of a store is more simple than searching for a parking space.

Even if it’s placed a block away, a bike lane near your place of business boosts foot traffic. People are more likely to wander around the area while they shop when there is a sidewalk and a secure location to park their bikes. Contrast this with the driver of a car who only considers the parking lot because it is either unsafe or doesn’t appear to be “walkable.”

Another way in which mountain biking helps the economy is by creating jobs. Highway construction is much more expensive than establishing bike lanes. A mile of urban motorway typically costs $60,000,000 to construct, whereas a mile of bike lane typically costs less than $250,000—240% less government money is spent.

Research by the Political Economy Research Institute revealed that programs that build bike infrastructure generate over 30% more jobs than those that merely build roads.

5. Property Value Increases if There is A Cycling Lane or a Sidewalk

Cities with adequate infrastructure for bicycling and walking have healthier populations and lower medical costs. As a result, those residents have more disposable income as they are no longer driven by ill health to use their own limited funds on pricey medical expenses.

Mountain biking is not only a great form of sport, it is also environmentally friendly due to no gas emissions, great for your health as it helps you to stay fit, and also affects the economy positively by creating more jobs and generating revenue. With the increase in mountain biking and creating awareness about its benefits, we hope that this will help the economy flourish to great extents.