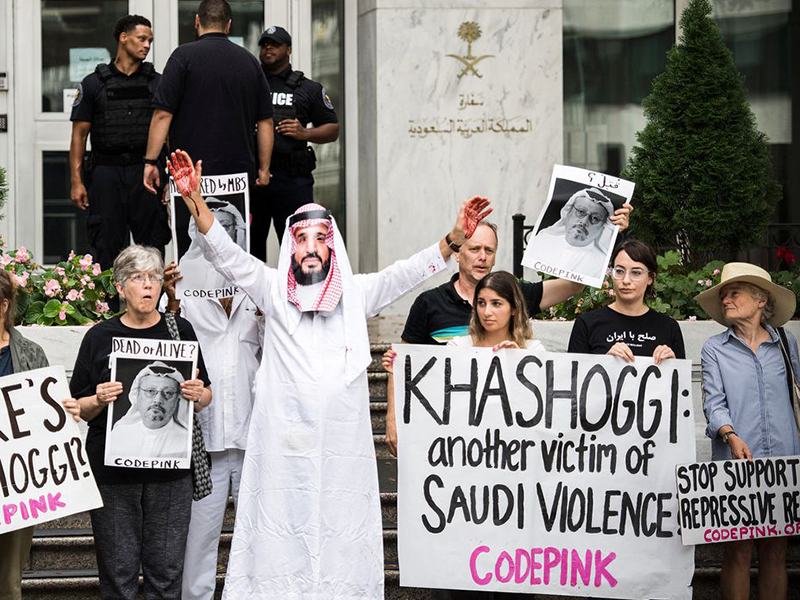 The European Parliament has asked last October 25 for an immediate embargo on the sale of weapons to Saudi Arabia, hence sanctioning the Kingdom of rogue Saudi Arabia which is joining the United States and Israel as the main purveyor of crime throughout the Middle East and the world. France still said they will apply sanctions only if it is proven that Riyadh was indeed involved in the killing of the controversial Saudi journalist. Madame Merkel at least days ago said that Germany would no longer supply the Saudis with arms – as a result of the heinous crime committed on Jamal Khashoggi.

No doubt, it was a horrible murder that took place in the Saudi Consulate in Istanbul, with Jamal Khashoggi’s body possibly sawed to pieces, and according to latest accounts, buried in the Consulate’s backyard. And all that now admitted, executed by order of Riyadh. To soften the blow, for business purposes, some European countries would like to argue that it may not have been a premeditated assassination, but possibly a mortal “accident”, which would of course change the premises and lessen the punishment – and weapon sales could continue. It’s all business anyway.

Europe has no morals, no ethics no nothing. Europe, represented by Brussels, and in Brussels by the non-elected European Commission (EC), for all practical purposes is a mere nest of worms, or translated into humans, a nest of white-collar criminals, politicians, business people and largely a brainwashed populace of nearly 500 million. There are some exceptions within the population and fortunately their pool of ‘awakened’ is gently growing.

It took the horrendous murder of a famous Saudi-critical and Saudi-national journalist, for the Europeans to react – and that, mind you, grudgingly. They’d rather follow Donald Trump’s line, why lose 110 billion dollars-worth of arms sales to the Saudis, for the murder of a journalist.

Even Switzerland, a neutral country according to her Constitution, not a member of the EU, but a staunch adherent to the (non-) European Union through more than 110 bi-and multilateral contracts, it was revealed yesterday, is assisting in Saudi Arabia converting the Swiss built (civilian) Pilatus helicopter into a ferocious war machine. Pilatus has always had that reputation of its controversial convertibility and was particularly known within Switzerland for that reason – but now, they surpass the limit of the tolerable, by helping the criminal and warmonger Saudis to mount a flying war machine in their, the Saudi’s, country – totally against Swiss law and against the Swiss Constitution, but fully tolerated by the Swiss Government.

Peter Koenig is an economist and geopolitical analyst. He is also a water resources and environmental specialist. He worked for over 30 years with the World Bank and the World Health Organization around the world in the fields of environment and water. He lectures at universities in the US, Europe and South America. He writes regularly for Global Research; ICH; RT; Sputnik; PressTV; The 21st Century; TeleSUR; The Vineyard of The Saker Blog, the New Eastern Outlook (NEO); and other internet sites. He is the author of Implosion – An Economic Thriller about War, Environmental Destruction and Corporate Greed – fiction based on facts and on 30 years of World Bank experience around the globe. He is also a co-author of The World Order and Revolution! – Essays from the Resistance.