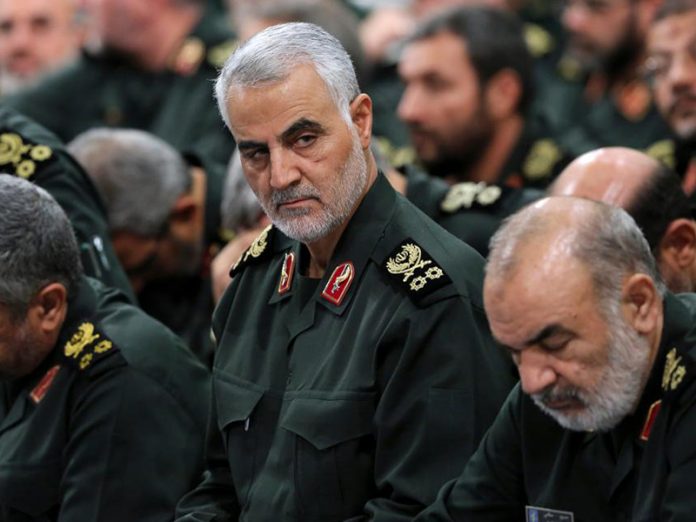 Interestingly, after the US attack on Iraqi Militia fighters on 31 December 2019, and the assassination of General Qassem Suleimani, on 2 January, the first thing President Trump could come up with, was bragging that it was him who gave the order to murder the popular military leader. General Qassem Suleimani, was the commander of the Iranian special Quds Force. The Quds Force was created during the Iran–Iraq War as a special unit from the broader Islamic Revolutionary Guard Corps (IRGC). It has the mission of liberating Muslim land, especially al-Quds, from which it takes its name – “Jerusalem Force”, in English.

General Suleimani was killed by a US drone. He was not only the most popular and prominent military officer in Iran, but he was also influential and respected throughout the Middle East. He was chief in training Iraqi forces who eventually defeated ISIS in Iraq within less than a year, when the US and NATO estimated it would take at least 3 years. General Suleimani, along with Russia was also instrumental in training the Syrian armed forces with the objective of defeating ISIS / IS / DEASH in Syria, and they succeeded. This US act of impunity, the General Suleimani killing, was unmistakenly targeted with precision and as such a clear declaration of war on Iran.

General Suleimani was killed by a US drone. He was not only the most popular and prominent military officer in Iran, but he was also influential and respected throughout the Middle East.

Trump expected applause from the public at large. Let’s not forget he is entering the year 2020 of his re-election… that’s what he wants. So, he needs increased popularity and approval ratings. To be reelected, he, like others before him, doesn’t shy away from committing murder or entering a new war, killing millions. That’s what American Presidents do to win elections. That’s what Obama has done. He entered the Presidency with two ongoing US wars – Afghanistan and Iraq – when he left office the US was engaged in seven wars around the globe, in Libya, Syria, Sudan, Somalia, Pakistan, as well as Afghanistan and Iraq.

Plus, numerous proxy-conflicts, meaning, they are fought by mercenaries and / or US trained, funded and armed terrorists, i.e. ISIS / DAESH, Islamic State (IS) and whatever other names the empire gives its agents of terror to confuse the world. And let’s not forget, the algorithmically manipulated regime-change elections in Latin America and Europe, the steady NATO advances with new military bases encircling Russia and China, including the stationing of more than 50% of the US Naval force in the South China Sea.

Most of the US Presidents are elected on the basis of their aggression, planned or ongoing, on how much they are willing to kill around the world – and how well they are representing the interests of the US War Industry — and, of course, the Israeli AIPAC (American Israel Public Affairs Committee). In other words, Americans who go to the polls, are duped into believing they are electing a president, when in reality their president had been pre-selected by a small group of elitists, representing the key US interests, the War Industry, Big Finance, Big Oil, Big Pharma – and who else, of course, the State of Israel.

The unarmed Iraqi protests and attack on 31 December on the US Embassy in Bagdad was a response to a US assault on Militia Iraqi forces on 29 December – leaving at least 25 dead and more than 50 wounded. The US has absolutely no business in Iraq. Not now, not ever – nor in Syria, nor anywhere else in the Middle East – for that matter, outside the frontiers of the United States of America. Its as simple as that.

And the world, the UN the UN Security Council should act accordingly.

The boundless US aggression must be stopped.

The world has become used to it – and, for the most part, is just silent. The ABNORMAL has become normal. That must be reversed.

Yes, the Iranian Government warned of retaliation. Understandably. However, that is precisely what Washington and the Pentagon wants; that’s what they were provoking, with this assassination of General Suleiman, and earlier with confiscated oil tankers and tanker attacks in the Gulf. The US hawks are just waiting for Iraq to retaliate, so they can attack in full force – or ask Israel to attack in full force with US backing, of course.

Knowing how the US is acting around the world with impunity – and especially in the countries they want to dominate – Iran has to count with the worst. So far, Iran has been acting wisely with a lot of restraint, not to risk MAD – Mutually Assured Destruction, in other words, a World War scenario.

A retaliation must be well-thought out – and foremost not be obvious. It must be strategic with long-term impact not the short-term face-saving military act. In the long-term, non-aggression, non-confrontation – the contrary of what Washington is seeking – may prevail. Let the American war hawks continue shadow boxing.

What the Middle East and world is dealing with, is a dying beast – that’s what the US empire has become. The beast, in its last breath, is lashing out round itself no matter how many other countries it pulls with it into the abyss, no matter how many people are killed in the process.

What will be the world’s reaction to this open and flagrant murder? – Do not expect much from the US-submissive West, especially the Europeans.

However, Iran can certainly count on Russia and China and on a number of other allies. And in the UN on the more than 120 non-aligned countries, that also stand behind Venezuela and Cuba, and now behind Evo Morales.

This is important. These unaligned countries are now in the majority of the UN body of member states. They have to speak out in the Security Council, as well as in the General Assembly. This case of US impunity should be elevated to world attention. Therefore, Iran may want to call a special UN General Assembly Meeting to discuss the case. It would show where the UN stands – and would accordingly provide Iran with more leverage on their reaction.

Iran cannot elevate this case high enough on the world stage. So that each and every nation realizes that their own sovereignty is at risk – is every day at risk – of being annihilated by the wannabe World Hegemon – the self-declared Exceptional Nation, US of A.

Only united this monster can be beaten.

Washington is weak, knows no long-term thinking, no long-term strategy – lives off instant gratification. This works for a while, by sheer military force, but not forever.

Russia and China have now far advanced precision weaponry – and are allies of Iran, short-term thinking may be a suicide mission.