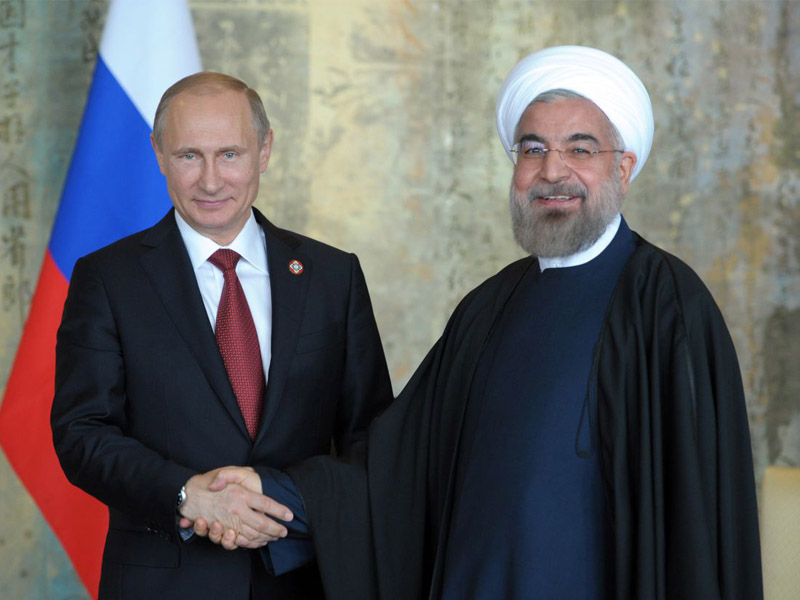 President Putin arrived in Tehran on 1 November for talks with the Ayatollah Khamenei. First, to cement the Nuclear Agreement of 2015 (Vienna), as far as Russia is concerned, thereby sidelining Trump’s attempt at reneging on the agreement. Second, to sign billions worth of tripartite hydrocarbon deals between Russia, Iran and Azerbeijan. And this in ruble. NOT in US dollars, thus, effectively detaching Iran from the dollar hegemony. In other words – helping Iran in de-dollarising her economy – and effectively and drastically contributing to diminishing the dollar’s stance as a world reserve currency. That’s “Resistance Economy” at its best. De-dollarisation is a key principal of the concept of Resistance Economy which also implies economic auto-reliance and trading only with friendly partners.

Iran has full technological, agricultural and intellectual capacity to become self-sufficient. This is a great step towards a new economy – a sea change in economic parameters of freedom and equality. It is in particular a detachment from the uncountable illegal “sanctions” the US is keen on imposing on countries that refuse to follow her dictate. Belonging to another monetary system, trading and investing outside the dollar-dominated western banking system, is like a breath of fresh air.

Other countries may take an example. Venezuela has already done so, by signing hydrocarbon deals with China in Yuan – gold-convertible yuans. Chapeau! – Away from the dollar. For Venezuela, only a few thousand kilometres apart from the border of the great abusive emperor, this is a daring move and a demonstration for Washington of Venezuela’s independence. Venezuela has the support of Russia and China, as both have huge investment and trade agreements in Venezuela, i.e. China in excess of 12 billion dollars of trade agreements alone, one of the largest, if not the largest with any Latin American country.

Washington is aware of it. Threatening Venezuela is therefore more of Trump-type bluff and propaganda than anything else. Besides, US mercenaries and CIA agents were vital in initiating and inciting violent disruptions in Venezuela’s elections, causing more than hundred deaths. Venezuela’s democracy has survived and is a shining example of a peaceful, democratic and sovereign country, despite these vicious outside interferences.

Threatening Venezuela is therefore more of Trump-type bluff and propaganda than anything else.

Iran is also at the point of joining the Shanghai Cooperation Organization (SCO) which comprises China, Russia and most of Eurasia, plus India and Pakistan – embracing about half of the globe’s population and one third of the world’s GDP. The SCO is a strategic economic but also defence association – and foremost, the SCO has an economy free from the dollar dominion. There is a “waiting list” of more countries wanting to join the SCO.

What Mr. Putin said in terms of self-reliance and “sanctions” has worldwide significance. It not only applies to Iran, but to any country across the globe that is tired of corporate globalisation, of the subservience to Washington and of being enslaved by debt. Here are Mr. Putin’s words to the Ayatollah repeated:

“Some Russian producers and traders pray that the US sanctions wouldn’t end, because as a result of them, their capacities have started to attract attention. From 2014, i.e. the start of US sanctions, we devoted our funds to scientific and technological progress, and we had significant growth in the fields of biotechnology, IT, agriculture and space industries. Now, in spite of the initial concerns, we have realised that we can do whatever we decide to.”

These words translate into a new economic paradigm, “local production for local consumption with local money and public banking for a sovereign local economy and sovereign and friendly trading partners”.

The Russian leader also referred to Iran as a vital pillar for stability and peace in the Middle East; he lauded Iran’s role in helping defeat the ISIS/Daesh terror and bringing Syria back into control of Damascus.

In addition, Iran will be part of President Xi (China) initiated New Silk Road, or OBI – “One Belt Initiative” – which is already designed in four routes connecting China and Russia throughout Eurasia, the Middle East – and even Africa – with the western most links of Eurasia, i.e. western Europe – that is, if Europe will finally see the light and accept that the future is in the EAST – also Europe’s future – and that the west, led by Washington into an abyss, is slowly committing suicide by its war atrocities, greed-sponsored terrorism continuous lies. There is no lie that will not be discovered sooner or later – and when that happens a quantum shift in public opinion may take place and the west’s credibility and the fake abusive debt-and-interest based dollar economy will become a collapsing Ponzi scheme.

Iran has chosen – and is well on her way to fully recover from the wrongly and criminally imposed punishments from a nation that has no right whatsoever to police and oppress sovereign nations according to her will.

The One Belt Initiative has the potential for massive economic, scientific and cultural development over the next few centuries, involving trillions of (today’s) dollar in investment and millions of jobs and livelihoods for the populations along the OBI route – with wide-ranging positive socioeconomic repercussions way beyond the geographic OBI sphere. The OBI inspires new dynamics in future socio-economic thinking and relations between nations. Countries are welcome to join the One Belt Road or Initiative, but are never forced, into this new economic direction, one of peace and equality, of a multi-polar world economy and political system.

Iran has chosen – and is well on her way to fully recover from the wrongly and criminally imposed punishments from a nation that has no right whatsoever to police and oppress sovereign nations according to her will. Those times are on a fast track to oblivion.